Towards Christmas: In anticipation of the Incarnation 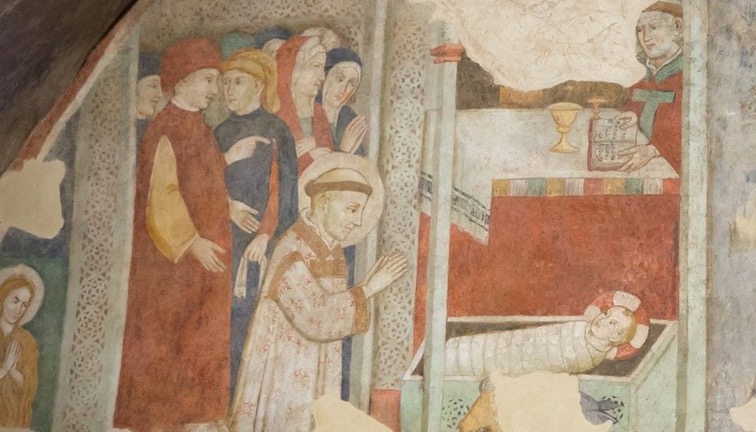 Today we rush to celebrate Christmas! As early as October you often start to see the first Christmas trees and tinsel appears in the shops. Advent, the period of reflection and anticipation seemly disappears as Christmas carols are sung and parties held.

As Franciscans we know of the story of Greccio, but do we remember that it only occurred in the last three years of St Francis’ life. There was a long period leading up to that point! The hermitage near Greccio was one of St Francis’ favorite places to rest and reflect. He developed a relationship with the place and the people over several years.

Both the Assisi Compilation & Celano’s Life of St Francis describes his close friendship with Lord John of Greccio “whom the saint loved with great affection and to whom he showed great friendliness during his whole lifetime.” John was a noble man who “trampled the nobility of the flesh under his feet and pursued instead the nobility of the spirit.” A Franciscan Secular?

The Assisi Compilations describes how Greccio was the place that St Francis chided his brothers for celebrating a large Christmas feast without welcoming the poor to the table. The brothers were so humbled by his words that, while Francis lived, they used to eat their meals like the poor, sitting of the floor rather than at a seat at the table.

Francis’ example lead many lay people in Greccio to live holy lives. He said of them “even in a large city not as many people have been converted to penance as in Greccio, which is only a small town.” Assisi Compilation.

Relationships take time. They are developed through sharing time together, through good times but also in times of struggle when things are not going so well. They can break down and then someone needs to make the first move to restore the relationship, to reach out and risk rejection.

So it was with God and his people. There were moments of intimacy, sharing and trust. There was betrayal and rejection. There were times of seeming silence and exile. God sent prophets to seek reconciliation, but the relationship faulted. A living relationship of justice and mercy was replaced by a set of rules and law. There however remained hope that the relationship would be restored.

And then God reached out!

The Father placed his Son in the care of a young women. The Word became Flesh as a child that needed to be carried and nurtured. The world had to wait as the child grew and became a man. Only then did Jesus begin his ministry.

Our faith needs to be nurtured. It needs times to grow. We need time in prayer. We need to invest our energy and hope, with no immediate reward.

Francis took time to prepare for the Christmas celebration in Greccio in 1223. Not only on that night but through years of preaching and giving example to the town. Only then did he organize the hay, the ass and ox.

It was while Francis was preaching the homily, filled with love for the Babe of Jerusalem, that John “saw a beautiful little child asleep in that manger whom the blessed father Francis embraced in both of his arms.” (Bonaventure, The Life of Francis) The Word made Flesh then humbly appeared again on the altar as bread and wine.

Let us not rush towards Christmas. Let us find some time this Advent to prepare ourselves for the coming of our Lord. Let our homes at Christmas be a “new Jerusalem”, just like Greccio in Francis’ time. A place of welcome, a place of hospitality, a place where Christ is present. And let us sing:

On this day Christ is born:
Today the Savior has appeared.
This day the angels are singing on earth:
Archangels are rejoicing.
Today the just are glad and say,
‘Glory to God in high heaven”

The Word became flesh and dwelt among us.
Blessed are you, Father.
For the Word made flesh who dwells in our midst.
He walked this earth
And lived out his thanksgiving to you in simplicity and love.
May we be thankful for the gifts of our life,
So, your name may be praised and blessed,
Now and forever.
Amen

Modified from Franciscans in Prayer

All the Lord’s Peace and Goodness for this Christmas for you and your families.
Merry Christmas and a Holy & Happy New Year.