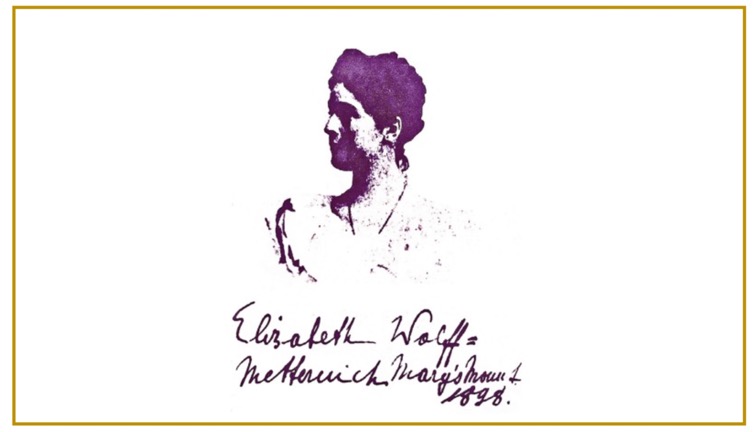 The Countess Elizabeth Wolff-Metternich
A descendent of St Elizabeth of Hungary in Ballarat Vic.

The following article is from “The Age” Newspaper[1] in Melbourne:

Secluded within the convent grounds at Mary’s Mount, in Ballarat Victoria is a beautiful little chapel which has been admired by many thousands of visitors. The freestone building as it now stands, with its handsome marble altar and its altar rail of finest Irish marble, its furnishings of best Australian timbers, its statues from the hands of the masters, and its exquisite paintings, is now numbered among the show places of Ballarat.

One day in 1898 there arrived at the Convent door[2] two ladies who asked to see the rev. mother. She was engaged at the time, but they saw some of the sisters, and said they would call again. They did so, and this time met the rev. mother. The younger one, who acted as spokeswoman, was a delicately nurtured girl of about 22 years. Her Grecian profile and patrician bearing conformed well with her mode of speech, which disclosed a slight foreign accent. She introduced herself as Elizabeth Metternich, and her companion as Miss Ryan. She said they desired to stay at the convent as boarders. Mention was made of the fact that the visitors had just arrived in Australia, and in the course of conversation it become evident that the younger was no mean linguist. The rev. mother was loth to take in strangers, but she was attracted by their manner, and it was arranged that, they should stay. Mention was made of payment, and the rev. mother, noticing a hesitancy, hastened to observe, “That need not trouble you; you could teach German.” And so, it was arranged. Elizabeth Metternich became a teacher of languages at Mary’s Mount.

As time went on important-looking letters began to arrive from Germany addressed to the Countess Metternich. It was then her secret came out. Elizabeth Metternich admitted that she was not only a member of the famous Metternich family, but was actually the chief living representative of her of her family, with no less a personage than the Imperial Chancellor of Germany as her guardian.[3] In the letters she received she was urged to return to Germany, but she expressed a strong desire to become a Loreto nun.

She consulted the rev. mother on the subject, but the latter would not hear of it, at any rate until she had seen and consulted her relatives and guardian. As the guest of Janet Lady Clarke, she visited Melbourne, and participated in the Cup week festivities, and at the suggestion of the rev. mother arranged with her cousin. Count Wolff-Metternich, the German ambassador in London, to pay him a visit. In the meantime, and particularly before her identity became known, “Miss” Metternich had displayed the keenest interest in the building of the Chapel. She learnt that its rate of progress was likely, to be slow. She, however, confidently remarked to the sisters, that the chapel would-be built-in time for the mother’s jubilee, but they pointed out that that was impossible, as the jubilee was only a few years off. Her only remark was to add with still greater confidence, “It will be built.”

On one occasion she went to the rev. mother and said, “Would you prefer that I should give you a marble altar or an organ for the chapel?”The rev. mother, who could see no prospect of the walls being built, much less the interior furnished, replied good naturedly that she would prefer the altar.“Then you shall have it, and it shall be of my own design,” the countess added. Unknown to the convent authorities, she communicated with one of the world’s most famous sculptors and placed an order for the beautiful marble altar which now adorns the chapel and has been admired by many thousands of visitors.

One day shortly before her departure for England on a visit to her cousin, a formidable envelope was received from the postman. The countess, after examining the contents, waved the letter excitedly: and remarked – “Hurrah, rev. mother will get her chapel.” She offered no further explanation, but in actual fact it was her will, bearing the historic seal of the Metternich’s, that had reached her from her lawyers. It had been executed only a few days previously, a lawyer friend having arrived from Melbourne for the purpose. By a strange chance the letter arrived on the feast day of St. Elizabeth, the saint after who Elizabeth Metternich was named. During her stay in Ballarat the countess was noted for her many acts of charity, and her monthly allowance – a considerable sum – was almost entirely devoted to relieving cases of distress among the poor.

When the countess departed for England – on a mail steamer she was accompanied by her companion. During the voyage she was a frequent visitor to the steerage. Specially interested in the poorer travelers, she took particular notice of a poor woman who was returning from Australia with her son, a weakly boy. Two days before the mail steamer’s arrival at Marseilles the countess was attending a ball on board. Word was brought to her that her protege had been taken suddenly ill. Without waiting to place a wrap over her light evening, dress, the countess rushed down to the steerage and spent some time nursing the poor lad.

When the steamer reached Marseilles, the countess was dead. Of delicate build, she had always been threatened with chest trouble, and the chill night air striking through her flimsy ball dress had laid her low with pneumonia. When faced with death, her thoughts flew back to Ballarat. To her companion she gave strict instructions to see that a satchel among her luggage was handed over to the Chancellor of Germany. It contained her will. “Rev. mother shall get her chapel,”were among her last words. The will in due course reached the German Chancellor. He communicated with the convent authorities at once, and informed them that the Countess Metternich, who had left a considerable fortune, had directed in her will that £20,000 should be devoted to the erection of a chapel at Mary’s Mount. Within a year, the £20,000 arrived in Ballarat with a substantial, sum added to it, representing one year’s interest. The building proceeded apace and so the prediction of the aristocratic stranger came true – the rev. mother had her chapel for her – jubilee.

Endnote 1: Australia has a connection with St Elizabeth, Patron of the Secular Franciscan Order.

Endnote 2: St Elizabeth and her husband Ludwig (Louis IV) had three children. The first child was Hermann II (1222-1241). At the age of four years he was the Landgrave of Thuringa after the death of his father Louis IV (the holy), but his uncle Henry Raspe, assumed regency while Hermann was still a boy and Henry Raspe usurped that title. As a teenager Hermann visited the court of St Louis IX King of France, perhaps to pursue with the saintly king his right to the position of Landgrave. Every time the young Hermann came into the presence Blessed Queen Blanch, who was St King Louis’ mother, she used to kiss the boy on the forehead as a living relic of his mother St Elizabeth. Hermann II married Helen, daughter of Otto 1, Duke of Brunswick-Luneburg, but shortly after the marriage he suddenly died, at the age of nineteen leaving no children. His uncle Henry Raspe was accused of poisoning him.

Endnote 3: The second child of St Elizabeth and holy Louis was Sophia (1224-84), who married Henry II, Duke of Brabant and so the ancestor of Countess Elizabeth who came to Ballarat.

Endnote 4: Gertrude (1227-97), Elizabeth’s third child, was born several weeks after the death of her father who was at the Crusades. She became abbess of the Premonstratensian convent of Altenberg near Wetzlar and is known today as Blessed Gertrude of Altenberg. Feast Day 19th August. See: webpage for more info: http://www.premontre.org/chapter/cat/people/perpetual-calendar-of-order-saints-and-blesseds/bl-gertrude-august-13/

[1] Everything in this Monthly Spiritual Message is from: The Age (Melbourne, Vic: 1854 – 1954) Sat 30 Sep 1922. p. 21 “What Metternich Gave to Ballarat.” Except the footnotes and endnote. For further reading see: https://loreto.vic.edu.au/loreto-college/heritage/philanthropy/the-countess-and-the-church/

[3] The Newspaper may be incorrect as to her Guardian being the Imperial Chancellor of Germany. The Countess was born on the 18th of May 1875 and was the youngest daughter of Count Wolff Metternich and his wife Countess Nesselrode. The house of which Elizabeth was a scion is one of the noblest in German, connected with Royalty, and descended in the direct line from Sophia, daughter of St Elizabeth of Hungary, and Henry II Duke of Brabant.

PrevPreviousThe Mercy of God And “Laudato Si” In Pope Francis and St. Francis Of Assisi – Part 4
NextTowards Christmas: In anticipation of the IncarnationNext