The Parable Of The Talents 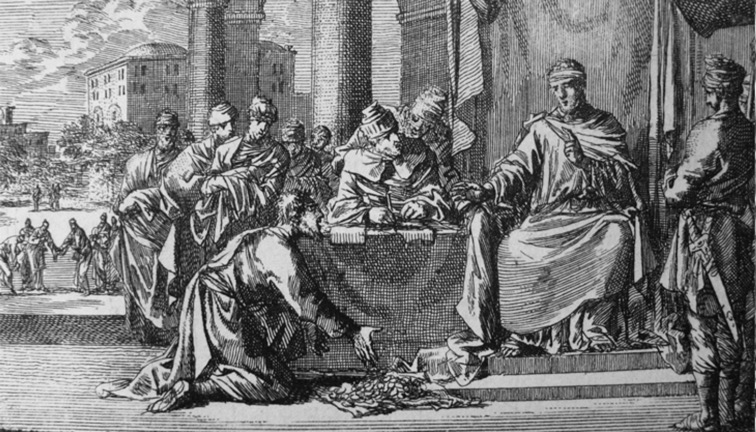 We usually interpret the parable of the talents in Matthew’s gospel (Mat 25:14-30), and of the pounds in Luke’s gospel (Lk 19:11-28), as an exhortation to develop our God-given gifts and to make them productive in building the Kingdom of God. Our heroes are the servants who returned their talents with interest. We dismiss the unprofitable servant.

But there are two different ways of interpreting the Parable of the Talents or Pounds, depending on the culture of the reader, whether Western or Middle Eastern. We with our Western background have no time for the lazy servant who was given the one talent and made no profit for his boss, but people of a peasant background recognize him as the hero of the parable. How can this be?

The way we read the parable in Matthew’s gospel assumes that in our society making a profit and getting wealthy is the ideal, so the two servants who do just that for their boss and for themselves are the heroes. But Jesus wasn’t preaching good news for capitalists. His audience, and Matthew’s readers, were mainly poor peasants. So, what did they make of this parable?

We have to consider some of their ideas that are foreign to us. While we treat the world as though its goods are unlimited, Jesus’ audience understood that the world’s goods were limited and that they had been already delved out among them. One person’s gain over his share was another person’s loss from his share. An honorable person didn’t try to get more of his allotted share. He considered those who did to be thieves. So, the two servants who increased their boss’s wealth, and their own, would have been seen as robbers who cooperated with their evil master in extortion, to enrich himself and his cronies by stealing the resources of others.

From the peasant’s point of view, the honorable thing was to bury his boss’s one talent so that it remained safe and intact, not gaining, not losing. Rabbinic law provided that burying a deposit was the safest way to care for someone else’s money.

So, the third servant is the only one in the parable acting in a morally responsible way. The boss’s condemnation, as well as the rewards given to the cooperative servants was just what peasants had learned to expect from rapacious masters and their accomplices.

If Jesus intended to tell this parable from a Western point of view, it would be crushing news for peasants. It would mean that God, represented by the boss, would treat them in the same way as the rich had always treated them, lazy, unprofitable, even wicked.

But from the Middle Eastern peasant’s point of view, Jesus condemned the rapacious actions of the rich and those who profited by their cooperation with them. His parable was good news for the peasants.

Luke’s gospel also includes the Parable of the Talents or Pounds (Lk 19:11-27). Luke’s version lends itself to a very different interpretation when we consider that, while Jesus addressed himself to exploited poor and uneducated people, he often took notice of current political events affecting them.

We who read the parables today are not always aware of their historical and social background. “A man of noble birth went to a distant country to be appointed king and afterwards return”. Jesus could well refer to Archelaus, the son of Herod, who had gone to Rome in 4 B.C. to have the will of Herod the Great confirmed in his favour.

Before he headed off, Jesus’ “nobleman” had his servants summoned to give each of them a sum of money, with his order, “Do business with these until I get back.” Archelaus appointed viceroys before he left for Rome. He directed them to collect the same exorbitant taxes that he had imposed on his subjects. On his return, he expected to collect the profits.

In fact, a delegation of his subjects went after him to Rome with the message, “Don’t come back.” So, in Luke’s gospel, Jesus relates, “But his compatriots detested him and sent a delegation to follow him, with this message, ‘We do not want this man to be our king.’”

So, Jesus may have had in mind the politics of the day and oppression of subjects. Jesus continued, “Now on his return … he sent for those servants … to find out what profit each had made.”

The first two servants were the same sort of extortioners as was Archelaus. “Well done, my good servant”, he says to both of them. He rewards them with the government of cities. Is Jesus saying to his disciples, “If you play along with their game, they’ll reward you for it.” We are accustomed to thinking that the first two servants are the heroes whom we should imitate, but in this interpretation of the parable they are blackguards and the third servant is the hero.

He confronts the tyrant, “I put your pound away safely… because I was afraid of you; for you are an exacting man: you pick up what you have not put down and reap what you have not sown.” He is condemned: “Why did you not put my money in the bank? On my return I could have drawn it out with interest… But as for my enemies who did not want me for their king, bring them here and execute them in my presence.” That’s Archelaus, again. He did just that.

The third servant is the one who is prepared to suffer the consequences of his conviction. Today, we call this “civil disobedience.” He is a “conscientious objector” and he pays for it. The world takes care of its own. But Jesus taught his disciples not to play along with an extortionate system that rewards those who go along with it but oppresses those who don’t.

The early Church historian, Eusebius, who died in 339 A.D., knew of both interpretations of the parable of the talents but favoured the one that recognizes the third servant as the hero.

A base community in Central America, composed of simple and uneducated people, came up with the same interpretation of these parables, as the result of the exploitation that they constantly suffer from rapacious overlords. Richard Rohr has presented this interpretation in his book, Simplicity, p. 164ff.