Origins Of the Secular Franciscan Order 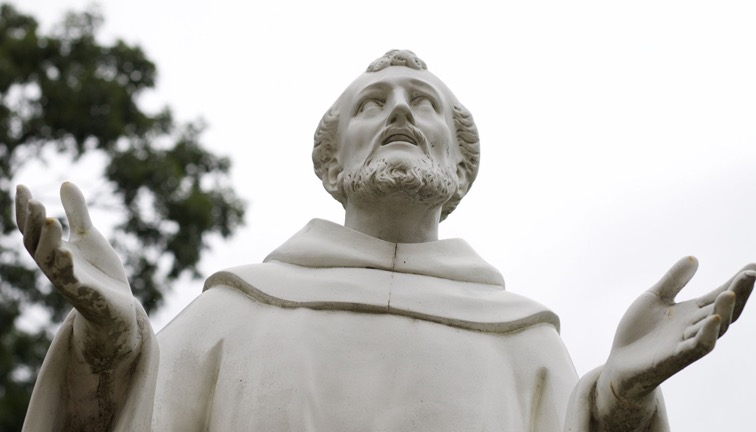 The Secular Franciscan Order traces its origins back to St Francis of Assisi (1182-1226), who gathered round him the “Brothers and Sisters of Penance of Assisi”. Let us read what the early biographers of St Francis have to say about them.

Friar Thomas of Celano, who knew St Francis, wrote his first Life of St Francis, in 1228. It’s worth reading all of numbers 36 and 37, which include the following:

… many, casting aside earthly concerns, gained knowledge of themselves in the life and teaching of the most blessed father Francis and aspired to love and reverence for their Creator. Many people, well-born and lowly, cleric and lay, driven by divine inspiration, began to come to Saint Francis, for they desired to serve under his constant training and leadership. … through his spreading message, the Church of Christ is being renewed in both sexes according to his form, rule and teaching, and there is victory for the triple army of those being saved. Furthermore, to all he gave a norm of life and to those of every rank he sincerely pointed out the way of salvation. FA:ED, vol. I, p.216

God gave St Francis of Assisi and his way of life as a gift to the Church. This is what the Church is saying when it confirms the Rule of the founder of a religious Order. The founder is recognized as a “charismatic” person, that is, one whom the Holy Spirit has gifted, not just for his or her own benefit, but so that he can help to build the church community, the Body of Christ. St Francis was gifted to father not just one religious Order but a family of Orders, both religious and secular.

We need to see the Secular Franciscan Order as an integral member of the Franciscan family. St Francis inspired an Order of secular men and women, as well as one for friars and another, with St Clare, for contemplative nuns. The Secular Franciscans are not just friendly hangers-on to the Franciscan religious. That would betray the gift that God has entrusted to his Church. Through St Francis, God gave an entire spiritual family to the Church.

Thomas of Celano describes the determining factors in the conversion of the laity as the life and teaching of Francis, his training and leadership, and his form, rule and teaching that he gave them. It is important to note, also, that they were driven by divine inspiration.

Our second source is the Legend of the Three Companions, which dates from 1246. The three companions were Leo, Angelo and Rufino, followers of St Francis since his conversion. We read, in n.54:

From then on, [that is, after the approbation of the first short rule of the friars in1209] blessed Francis, going around the cities and villages, began to preach more widely and more perfectly proclaiming the kingdom of God with confidence …. Drawn by divine inspiration, many people, well-born and lowly, cleric and lay, began to cling to blessed Francis’ footsteps, and, after they had abandoned the concerns and vanity of this world, to live under his discipline. FA:ED, vol. II, p.99

This passage underlines the importance of Francis’s preaching, identified with his example. The laity, drawn by divine inspiration, sought his direction, guidance and discipline.

The location in the text of what is said here, just as in our first reading from Thomas of Celano (I Cel, 36-37), supports the opinion that the Third Order was in existence very soon after the approbation of the friars’ Primitive Rule, perhaps already in 1209 or 1210. The lay Third Order of the Penitent or Continent was certainly founded in Florence in 1221. (See Omnibus, footnote 2, p.1518.)

The Secular Franciscan Order was bound, in its birth, life and growth, and in its spirit, to the regular Franciscan Orders of friars and nuns. The three Orders grew spontaneously out of the life and preaching St Francis and his friars. The secular Order grew out of the intimate personal and spiritual relationships of certain lay persons, men and women, with St Francis and St Clare and their companions.

Now in some countries, we are witnessing a movement in the other direction. Where the Secular Franciscans have applied themselves to the post-Vatican II Rule of Paul VI and have renewed their fraternity lives accordingly, they are challenging the friars to develop a strong community life and to be more aware of the Franciscan family, where the seculars are more than quaint hangers-on, or at best auxiliaries.

In the Legend of Perugia, written also round 1246, we read:

The brothers of the friary of Greccio were virtuous and poor, and the inhabitants of the country … were more pleasing to blessed Francis than those of the rest of the province … His example, his preaching, and that of his brothers were the reason, together with the grace of God, why many of the inhabitants entered the Order… The brothers at Greccio … sang the praises of the Lord in the evening. Then, men and women, great and small, would come out of their homes, stand on the road before the town, and alternate with the brothers … Even the little children who hardly knew how to talk praised God according to their ability.
Omnibus, p.1011

This passage is important for the history of the Third Order (see Omnibus, note 67 on p.1095). Where it says that “many of the inhabitants entered the Order”, we would say that they joined the Franciscan family, either as friars or as nuns or most frequently as seculars. The reasons why they joined are given, namely, the example, preaching and liturgical prayer of Francis and his friars. Again, the grace of God is stressed.

St Bonaventure, Minister General of the friars, wrote The Major Legend of Saint Francis in 1263, and this became the officially approved biography. In Chapter 4, n.6, we read:

For set on fire by the fervour of his preaching, a great number of people bound themselves by new laws of penance according to the rule which they received from the man of God. Christ’s servant decided to name this way of life the Order of the Brothers of Penance. As the road of penance is common to all who are striving toward heaven, so this way admits clerics and lay, virgins and married of both sexes. How meritorious it is before God is clear from the numerous miracles performed by some of its members.
FA:ED, vol. II, p.553

In various ways and forms but in life-giving union with each other, they intend to make present the charism of their common Seraphic Father in the life and mission of the Church.

The three Orders, from their common beginning, formed a dynamic movement that brought new intensity to living the Gospel in the Church. The Franciscans, whether friars, nuns or laity, were fired by the Word of God. They experienced in their own lives what the Bible said about the lives of men and women of faith, hope and love. The biblical themes of death and life, selfishness and love, isolation and community, slavery and freedom, and growth from the negative to the positive, described their Franciscan way of life. They weren’t just themes that they traced through the books of the Bible in an academic, detached exercise. The Bible happened to the Franciscans.

In the Little Flowers of St Francis, written round 1330, we have a colourful picture of Francis, animating the laity spiritually:

They came to a village called Cannara. And Saint Francis began to preach, and he first commanded the swallows to keep silent until he had finished preaching. And the swallows obeyed him. And he preached there with such fervour that in their devotion all the men and women of that town wanted to follow him and abandon their town . But Saint Francis did not allow them, saying, “Don’t be in a hurry, and don’t leave. I’ll arrange what you must do for the salvation of your souls.” And then he got the idea of starting the Third Order for the universal salvation of all. FA:ED, vol. 3, p.593

St Francis disposed the laity to conversion, but he knew when to leave and let them get on with the job for themselves. He didn’t make the laity dependent on himself and he didn’t make himself indispensable as a companion.

In these passages, it is always the example of prayer and discipline of St Francis and his friars that attracts the laity. Through his preaching and teaching, and by his presence among the laity, he guides them in their spiritual life, not detached from their everyday life but integrated into it. Above all, the grace of God attracts the laity to the Franciscan way of life.

The first members of the Franciscan family were outstanding, not because they lived according to a strict set of rules, or because they adopted a body of teachings, or fostered certain devotions. They were outstanding as witnesses to Jesus Christ poor and suffering among them, and at the same time a living person, the risen Lord of the universe. The gospel came to life in the Franciscan family. The friars not only preached the Word of God; they lived it, or rather Him, Jesus Christ, before the eyes of the people, who immediately recognized God’s pilgrim people, the joyful poor, who suffered but were free.

The first Secular Franciscans were formed in the spirit of the Letter to all the faithful, which is thought to be a way of life that St Francis wrote for the laity. It was written out of the gospel experience of St Francis, fed on the biblical Word of God. That’s how the whole Franciscan family was formed in the beginning, and that’s how the whole Franciscan family must be formed today.

Please distribute this Monthly Spiritual Message to all members of your fraternity including isolated members.

PrevPreviousThe Parable Of The Talents
NextSecular Franciscan Priorities – Part 1Next