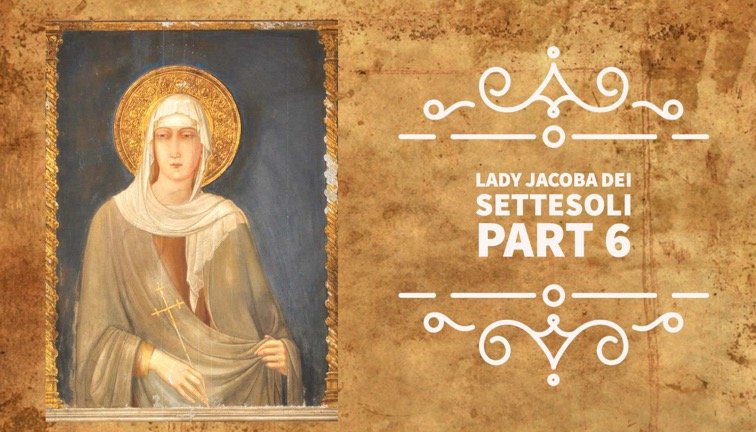 Lady Jacoba’s husband Graziano died in either 1212 or 1217. This timeline shows a rather dramatic divergence of opinion. It seems we do not know exactly when he died. The sources speak of a long widowhood for Lady Jacoba, so perhaps 1212 would be the best choice. Also, the sources are sailent on any relationship her husband Graziano may have had with Saint Francis. One thing remains true; Graziano trusted his wife’s ability in financial matters. She had full responsibility for the administration of his legacy, and she had sole responsibility to raise their sons to be able to assume responsibility for their father’s heritage and their position in Roman society. We are told both of her sons became Senators of Rome. Her way of life, from day to day, might in many ways have seemed to be simple. She was in the habit of attending Mass regularly, and certainly when she had the pet lamb St Francis gave her, it would insist that she went to Mass each day.

She certainly had ecclesiastical connections with the Roman Curia. We know that she had a relative, Stefano de Normandis dei Conti, from her father’s side of the family. He was also a nephew of Lotario dei Conti di Segni, who became Pope Innocent III. We know that Stefano, although he was married and had a son Filippo, lost his wife and entered the ecclesiastical state and was created a Cardinal in early 1216 by his uncle Pope Innocent III. Cardinal Stefano’s name was subscribed on a number of Papal Bulls and that he was at the Papal Elections of 1216, 1227, 1241 and 1241-1243. Initially a Cardinal Deacon of St Adriano, he later in 1228 opted for the order of Cardinal Priest of S. Maria in Trastevere. Of course, there is a lot more about him, but the point is that Lady Jacoba was well connected to know about ecclesial news in Rome as well as Roman politics and commerce. Because of her responsibilities, she was very much involved in the secular world.

Despite all this, she sought out Saint Francis of Assisi as her spiritual guide, and he had written her a spiritual letter, an exhortation. He may have written it for others as well, but she would have treasured it as if it were meant for her alone. Her grace, having seemingly everything this world has to offer, was that she sought him out because she was looking for something beyond the secular happiness this world can give and he responded to her and in doing so he found a third authentic way of living his vision, one he could share with everyone. So, when he spoke and when he wrote, Lady Jacoba was listening.

We have set the writing of the Exhortation to the Brothers and Sisters of Penance before the Lateran Council of 1215. To understand Lady Jacoba’s world better let us look at the events that led up to that great Council of the Lateran. Let us highlight the information that would have been available to someone with business and ecclesial resources living in Rome.

The Heretics: In the Spring of 1209, Saint Francis and his friars went to Rome and received verbal approval of their Order with permission to preach and then they went back to Assisi where they lived at Rivo Torto. In the same Spring of 1209, Pope Innocent III began a military Crusade against the Cathars later called the Albigensian heretics in Southern France. The Cathars tried to resolve the age old dilemma of where good and evil came from by declaring that there are two gods one good and the other evil. For them, essentially God was good and responsible for all things spiritual, but the Devil, equal to God was evil and responsible for all material things of this world. Thus, the body was evil, sex was evil, marriage frowned upon, food evil. We should live in this world in a very spiritual way. Crosses were burnt; the Eucharist was false; Christ did not become incarnate because a spiritual God would not do such a thing. It was, in fact, a very dangerous heresy that has left its taint on Christianity.

The Crusade against it became the responsibility of a group of northern knights, who were under the command of a Papal Legate, the Cistercian Abbot of Citeau, Arnauld Amalric. They had the consent and support of the King of France. Early in the Crusade, Count Raymond of Toulouse, having been accused of allowing the heretics to increase in his domains, gave up six castles and joined the cause against the Albigensian. By the end of June, the Crusaders had taken 200 castles in Southern France and began their assault on the city of Beziers. In the confusion of the fall of this city, the soldiers could not identify who were heretics and who were not and so they killed almost everyone. The Papal Legate wrote to Pope Innocent “While discussions were still going on with the barons [of the city]about the release of those in the city who were deemed to be Catholics, the serfs and other persons of low rank [even though basically] unarmed attacked the city without waiting for orders from their leaders. To our amazement, [they were] crying “to arms, to arms!” and within the space of two or three hours they crossed the ditches, and the walls and the city of Béziers was taken. Our men spared no one, irrespective of rank, sex or age, and put to the sword almost 20,000 people. After this great slaughter, the whole city was despoiled and burnt…”

This Crusade, within Christendom, became a military campaign by the King of France to bring Southern France completely under his control – and of course, rid the land of the heretics. It began in 1209 and continued until 1215. Then it continued, on and off, until 1229. To say that Lady Jacoba with her French family connections and business interests would never have even heard about it would be absurd, but something else most certainly did cause her concern.

By the 2nd of October 1209, Otto’s army was encamped outside Rome. Some of Otto’s men went into the city and on their way back to their camp they were attacked by Roman citizens. On October 4th, Otto IV entered Rome and was crowned Holy Roman Emperor by Pope Innocent III, but on his way out of Rome, he also was attacked by the Romans. Otto IV was furious that these Romans had attacked him and his troops, but he did not have a big enough army to attack or lay siege to the city of Rome itself. However, in reprisal, the newly crowned Holy Roman Emperor launched an attack on the Papal States. On the 20th of January 1210, the imperial troops of Otto IV took the Marches of Ancona and all during the summer of 1210 they made war on the Papal States. Otto’s army then marched into Southern Italy, and he made his winter camp at Capua about 30 kilometres from Naples.

On the 18th of November 1210, Pope Innocent III responded to this assault on Southern Italy by excommunicating Otto IV. Then with Imperial troops still making war in Southern Italy, one year later on the 11th of November 1211, Pope Innocent III deposed Otto IV as Holy Roman Emperor and the German princes elect Fredrick King of Sicily as the new Holy Roman Emperor. Frederick, who was only 17 years old, had been smuggled north from Sicily. He would not be crowned as Holy Roman Emperor until the 22nd of November 1220, but in March of 1212, this election of Frederick forced Otto IV to returned to Germany to uphold his claim as Emperor and Italy breathed a sigh of relief.