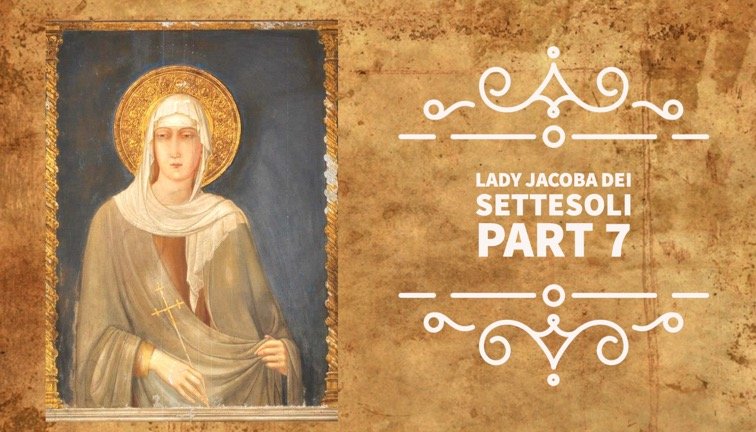 On April 19th 1213, Pope Innocent III, in a Papal Bull titled Veniam Domine Sabaoth[1]sent out his initial call for the Fourth Lateran Council, to be held in Rome. However, it took 2 years for all the Fathers of the Council to gather in Rome. By then Pope Innocent III, a Canon Lawyer would have all 70 of the Canons of the Council prepared and ready for distribution to the Council Fathers. As we have already seen, a great many things happened in those two years. Lady Jacoba lived in difficult, but interesting times.[2]

On the 8th of May 1213, Saint Francis preached before Count Orlando of Chiusi della Verna, beginning his sermon with the words of a troubadour’s song: “So great the good I have in sight, that every pain I count delight!” Count Orlando was so impressed by this sermon that he made a gift of La Verna to Saint Francis and his followers as a place of retreat.[3]

The same day, May 8th 1213, Pope Innocent III deposed King John of England for having attacked Church property.[4] King John having, previously been excommunicated, and now deposed, responded in fear by turning England and Ireland over to the Pope and thus making both countries a fiefdom of the Holy See. However, he does not do this with the consent of the English nobles, and that would cost him his absolute power to rule the country. Nevertheless, King John is absolved from excommunication in July, and the Interdict[5] was lifted in December 1213. Under Pope Innocent III it could be argued that the Papacy reached the zenith of its political power.

The deposed Emperor Otto IV was not defeated until July 27th 1214 at the Battle of the Bovines by King Philippe II of France. Only then does Otto retire from public life, to grow cabbages. The Battle of the Bovines changes politics in Europe. King Philippe II in defeating a coalition of English, Flemish and German knights of Otto IV, becomes undisputed King of France over which he is slowly taking complete control by using the crusade against the Albigensians to allow his knights the freedom to take more territory in Southern France. King Philippe II is the grandfather of Saint Louis IX, King of France.

In 1215, the Benedictine, Cardinal John of Saint Paul[6] the friend of Saint Francis and no doubt Lady Jacoba, died in Rome. He had lived a life style of simplicity and humility according to the rule of his monastic order. He was the first Cardinal Protector of the Franciscan Order. He was replaced as Cardinal Protector by Cardinal Hugolino dei conti di Segni, a cousin of Pope Innocent III.[7]

In the months and weeks leading up to the Fourth Lateran Council, Rome became very crowded and busy as the participants of the Council and their retinues sought places to stay. Pope Innocent III had reminded the participants that among their great retinue of assistants and servants it would not be appropriate that they bring their hunting dogs and pet birds.[8] We can easily imagine that Lady Jacoba with her palace and many other properties, would have been involved in accommodating some of these people.

On the 11th of November 1215, the Council began at the Lateran Palace. There were seventy-one patriarchs and metropolitan bishops, four hundred and twelve bishops, and nine hundred abbots and priors together with representatives of several monarchs. Because of the situation in southern France, there were some violent scenes among the followers of the French nobles and even among the French bishops. Continuing wars in Southern France and the confiscation of territories made the situation extremely difficult.

In the middle of all this excitement, we are told that both Saint Francis and Saint Dominic attended the Council. If Cardinal John of Saint Paul were too ill or dead, then both the Franciscans and the Dominicans would have come under Cardinal Hugolino as the one responsible for Religious Orders.[9] Certainly, by December 1216 Cardinal Hugolino was in charge of Religious, and they may have met in his house, as Saint Dominic spent the Winter of 1216-1217 there as a guest of the Cardinal.

The 70 Decrees of the Lateran Council all prepared beforehand by Pope Innocent III made this the most important Council of the medieval Church. It is difficult to focus on the aims of the Council. There was, of course, another call for a crusade against the Moslems, so as to free the Holy Land, but above all else, the Council was focused on a reform of the Church. Among the decrees were the following which seem important to note as we look at the world of Lady Jacoba dei Settesoli.

Canon 1: For the first time in legislation the word “transubstantiation” was used regarding the Eucharist. This Sacrament became a focus of attention for Saint Francis, who begins writing about it in many of his letters.

O wonderful loftiness and stupendous dignity!
O sublime humility!
O humble sublimity!
The Lord of the universe,
God and the Son of God,
so humbles Himself
that for our salvation
He hides Himself
under an ordinary piece of bread![10]

Saint Clare also became focused on the Eucharist. She began making corporals and towels for the altar. We are told that one day, being so sick she could not move very much and so she could not reach the next towel. The cat, realizing what she wanted, began dragging the piece of cloth towards her. Immediately she reprimanded the cat for dragging it across the floor and the little creature rolled it up, picked it up in its mouth, and then brought it over to her bed. At first, the story would seem too quaint to be true, but it can be found in the documents of her process of canonization by the Ninth Witness, Sister Francesca. The same sister gave testimony that when the Saracens entered the cloister, Saint Clare had the “small box” in which they had the Blessed Sacrament kept brought to her and then she threw herself down on the ground in front of it and begged the Lord to protect her sisters. Sister Francesca then said that she heard a “voice of wonderful sweetness” say that he would always defend them. The Lady Clare then prayed for the City of Assisi. The same voice then said, “The city will endure many dangers, but will be defended.”[11] Sister Francesca said that Sister Clare made over 50 sets of altar linen that were distributed to the churches.

[2] “May you live in interesting times.” This is an English saying pretending to be a Chinese saying as are many “Confucius says” English sayings.

[3] In 1224, La Verna would be the place where Saint Francis was sealed with the sacred stigmata during his vision of winged angelic seraphim in the form of the crucified Christ. Later in 1218 Count Orlando would build there for St Francis a chapel of Santa Maria degli Angeli.

[4] Brother of King Richard, the lionhearted who died in France in 1199, killed by a crossbow bolt.

[5] During a time of Interdiction there are restrictions on certain religious rites, including the saying of Mass.

[8] Falconry was a popular sport and status symbol among the nobles of medieval Europe. The Emperor, King Frederick II, became quite famous in his later years for this treatise on falconry “The Art of Hunting with Birds.” However, Pope Innocent III was reminding the Bishops of Canon IV of the Third Lateran Council (1179) which mandated that a bishop’s retinue should not contain more than thirty horses nor should it have hunting dogs and birds.