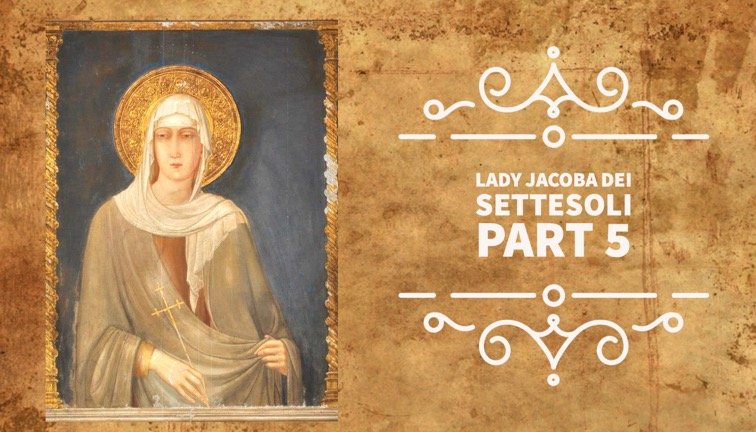 May the Lord give you peace.

This MAY Monthly Spiritual Message focus is on Saint Francis’ “Exhortation to the Brothers and Sisters of Penance.” It is a vitally important document written by Saint Francis, most probably before the Lateran Council of 1215. Saint Francis was writing to those people who were looking to him for inspiration, and of course one of these was Lady Jacoba dei Settesoli. This Exhortation, which today is a Prologue to our OFS Rule was therefore written some seven years before the OFS Rule was promulgated. There can be no doubt that Lady Jacoba and the “emerging” fraternity of those who wished to follow Saint Francis would have treasured this document, with its profound mystical theology in Chapter One. I believe that it is important, as we face up to the question before our Franciscan Assembly at the end of April, that we remember that the profound insight of Saint Francis was to found a new way of Gospel fraternity in the world within a complete Franciscan family. I have no doubt that this vision greatly influenced the way Lady Jacoba managed her substantial assets and resources. As we will see, as we continue to look at her life. Before she relinquished all power and wealth of her section of the Frangipani family to her son Giovanni, she made provision in law for the town of Marino, which she owned as a personal possession, and responsibility. Her concern for those for whom she had responsibility would seem to be influenced, not by simply running a business, a mercantile establishment with great resources, but by a genuine familial vision. When we too remember, and hold dear, to the fact, that we all belong to the Franciscan family, then the full charism and power of Saint Francis’ vision of universal fraternity will shine forth again. Perhaps only a candle in the darkness, but a light nevertheless, so people can find their way home.

Chapter one of The Exhortation.

When we look at the structure of The Exhortation to the Brothers and Sisters of Penance, which is set as a Prologue before the OFS Rule, we see that it mirrors Psalm 1 of the Old Testament. Saint Francis sets out “The Two Ways” of the psalm: The way to happiness and the way to destruction. The content, however, is a commentary on the words of the Lord: “Who is my mother, and who are my brethren?” And stretching out his hand towards his disciples, he said, “Here are my mother and my brethren! For whosoever does the will of my Father in heaven is my brother, and sister, and mother”.[1]

Having described those who do penance Saint Francis writes, that this fraternity of the faithful is sanctified by the Holy Spirit who “will rest upon them and make Its [2] home and dwelling place among them.” He has as much as said that a gospel fraternity is a privileged place where the Holy Spirit manifests Itself. As at Pentecost, it is in the prayerful fraternity that the Holy Spirit makes Its home.[3] In such a loving fraternity people encourage each other to take up daily the cross of the Lord Jesus Christ and to find in this – perfect joy. These then are the people who are committed to a way of life, a process of transformation in Christ, lived out – day by day, caring for those around them with love and compassion.[4]

Children of the Father.

Saint Francis says, “…they are children of the heavenly Father Whose works they do.” The work they do is because they strive to listen to and cooperate with the Holy Spirit. In this, they become brothers and sisters of the Lord Jesus, whose prayer, the “Our Father” Saint Francis also recommended to, and beautifully paraphrased for, his followers.[5]  Both Jesus and Saint Francis place the Gospel way of life within the context of a family; and express it in terms of relationship.

But in this theology of relationships, Saint Francis takes up the traditional mystical relationship in which Jesus is called the “Bridegroom of the soul.” He says “We are spouses when the faithful soul is joined by the Holy Spirit to our Lord Jesus Christ.” The mystical tradition of the Church describes this as a state of being one with Christ. Among the saints who have experience mystical espousals are, St. Angela of Foligno, St. Catherine of Alexandria, St. Catherine of Siena,St. Colette,St. Teresa of Avila,St. CatherineofRicci,St. Mary Magdalen de’ Pazzi,St. Veronica Giuliani,Venerable Maria de Agreda. St John Vianney was also supposed to have experienced mystical marriage and wore a mystical wedding ring.[6]

The Doctrine of Spiritual Motherhood.

Saint Francis not only writes of mystical espousals he also writes about a process called Spiritual or Mystical Motherhood. He moves directly from mystical espousals to spiritual pregnancy, where the Word of God, the Gospel life, is impregnated within us by the grace of the Holy Spirit and grows in us until we give birth to Christ through acts of kindness, mercy and compassion. He says, “We are mothers when we carry Him in our heart and body through a divine love and a pure and sincere conscience and give birth to Him through a holy activity which must shine as an example for others.”

It is Saint Bonaventure, who most thoroughly gives us a doctrine of “spiritual motherhood” and points out the fruitfulness of giving birth to Jesus. In his mystical work The Five Feasts of the Child Jesus, Saint Bonaventure says:

By the grace of the Holy Spirit and the power of the Most High, a soul dedicated to God could spiritually conceive the Holy Word of God and only begotten Son of the Father, give birth to him, name him, seek and adore him with the Magi and finally, according to the law of Moses, joyfully present him in the Temple to God the Father.[7]

In the preface to his translation of the Five Feasts of the Child Jesus, Fr Eric Doyle OFM tells us:

This short though profoundly mystical work, “The Five Feasts of the Child Jesus” came from the pen of St Bonaventure. Contrary to what one might expect from the title, the theme of this work is spiritual motherhood, namely, the doctrine concerning the mystical birth of God’s word in the soul and the vocation of every Christian to become a mother of Christ. This theme was dear to the hearts of Saint Francis and St Clare. The doctrine of spiritual motherhood invites us, men and women alike, to fashion our spiritual lives on the model of Mary, Mother of the Lord and image of the Church.

What Saint Francis, Saint Clare and Saint Bonaventure insist upon is that there is a maternal relationship with Christ in our spiritual lives, a relationship so intimate that it can perhaps be best understood in the context of a baby conceived in her mother’s womb. Spiritual motherhood comes before physical motherhood, and it continues throughout the child’s life. “Mary is the model for every disciple of her son. Every disciple is called to do the will of the heavenly father and to pronounce the Fiat to his word. By so doing each becomes a mother of Christ. It is also part of our evangelical vocation as members of the Body of Christ to assist one another to be mothers of the Word of God.”[8] Fr Eric Doyle makes one very significant point that is important for us Franciscans when it comes to those who have authority over others. He says: Saint Francis achieves a fine balance between the masculine and feminine elements in his nature, particularly between spiritual fatherhood and motherhood. Those called to exercise authority in the order he describes as mothers. Spiritual motherhood ensures that authority will remain in service in the fraternity and not degenerate into power over the Friars [others].[9]

Looking at the Exhortation of Saint Francis through the eyes of Lady Jacoba dei Settesole we must ask: What did she make of all this? She lived in a time which was perhaps more open to mystical insights than we do today. The 12th Century was an age of poetry, ideals of chivalry, romance, and mysticism. In the simple devotional life of the Church, these elements of were lived out day by day in the life of the faithful.

Finally, with stunning simplicity, Saint Francis makes his insights into a Canticle of Relationships:

O how glorious it is to have a holy and great Father in heaven!
O how holy, [and]consoling to have such a beautiful and wonderful Spouse!
O how holy and how loving, gratifying, humbling, peace-giving, sweet,
worthy of love, and, above all things, desirable
to have such a Son, our Lord Jesus Christ,

[2] The inclusive language use of “Its” as a pronoun for the Holy Spirit. This could be somewhat offensive to older English sensibilities. The problem is that defining the Holy Spirit as masculine or feminine is also ascribing human attributes to a being or person that is divine. This translation of the Exhortation is taken from Francis of Assisi. The Saint. Early Documents, which however is the definitive translation in English of the Franciscan Sources. The translators have capitalised “Its” which is respectful.

[3] Acts 1:14. “These joined in continuous prayer, together with several women, including Mary the mother of Jesu, and with his brothers(cousins).” This was a prelude to Pentecost.

[4] Rule of the Secular Franciscan Order No 22. “The local fraternity …is the privileged place for developing a sense of Church and the Franciscan vocation and for enlivening the apostolic life of its members.”

[5] 1 Celano 45; Legend Major 4:3. Francis teaches the friars to pray and gives them also the prayer “We adore you O Christ…”

[6] Rosmary Ellen Guiley The Encyclopaedia of Saints. Facts On File, Inc. NY 2001. p. 176 “St. John Vianney had numerous mystical experiences, including the mystical marriage, in which he received a gold ring of extraordinary brilliance, which he wore on the fourth finger of his left hand.

[7] Prologue to the Five Feasts of the Child Jesus.