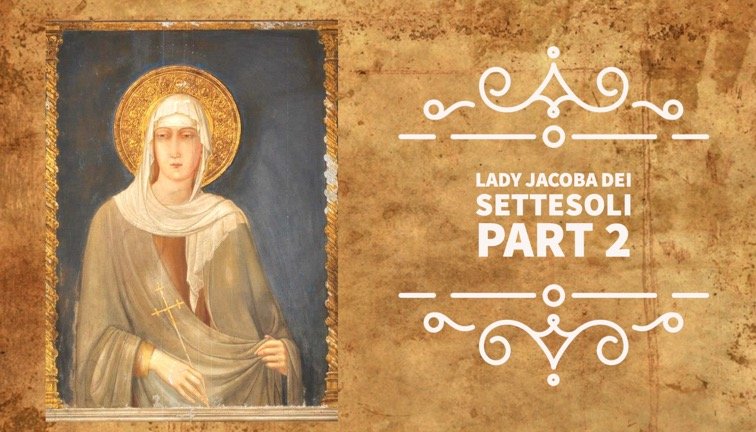 Lady Jacoba de Settesoli, her name “Jacoba” or “Giacoma” are both Italian versions of “James”. The name has its origins in Hebrew as Jacob the son of Isaac and Rebecca. Lady Jacoba was born of a noble Roman family of high rank, descended on her father’s side from the Norman[1] knights, who came to Rome to assist Pope Urban II in 1071 A.D. by freeing Southern Italy from the Byzantines and the Muslims. After conquering Sicily many of them settled with their families in Trastevere in Rome. It would not be surprising if Lady Jacoba spoke the Norman French dialect as well as Italian[2] and Latin.

She was born in 1190 at Trastevere with the name “Jacoba de ‘Normans”.[3] Her family would also boast among its members Cardinal Stefano de Normandis dei Conti,[4] who played an active role in the church during her life time.

We are told that Lady Jacoba was married very young to Lord Graziano de Frangipani, Count of Marino, and Master of the Septizonium.[5] He was a member of one of Rome’s greatest and most powerful families, the Frangipani. Their legend says that they were descendants of Flavius Anicius, who in 717 A.D. saved the people of Rome from famine by giving them bread. For this act of great charity he was popularly given the name Frangipani, which comes from the Latin Frangens panem (breaking bread).

The Septizonium, which Graziano Frangipani owned had previously belonged to the Camaldolese Monks who followed the Benedictine Rule. In 1145A.D. They sold it to the Frangipani family, who added it to their fortress. It is from the Septizonium that Lord Graziano and Lady Jacoba get their title “de Settesoli”.

Lord Graziano de Frangipani and his wife lady Jacoba also held many castles and landed estates other than the Septizonium.[6]They owned the town of Marino in the region of Lazio where many Romans built luxurious villas to escape the heat of Rome. In Marino, since ancient times, special pastries are still made in October, during the time of vintage, with “must” the freshly pressed grape juice with the skins of the grape seeds and stems of the fruit in it. These delicacies called Mustaccioli[7] remain popular even today. Lady Jacoba de Settesoli is listed as a famous citizen of Marino along with Vittoria Colonna whose family bought the town in 1419 and retained it until 1914.[8] In fact the town of Marino from 1990, the 800th anniversary of her death, now celebrates the life of Lady Jacoba de Settesoli with a yearly festival that increases in importance each year.

A document of 1210[9] says Lady Jacoba was already married. After giving birth to her two sons, Giacomo and Giovanni, she became a widow in 1217.[10] We are told that her husband died prematurely. Lady Jacoba would have been 27 years old at the time. We must assume that Grazione had full trust in her and that they shared together the responsibility of organizing and managing their vast holdings.

We do not know just how old her two children Giacomo and Giovanni were in 1217; all we know is that by 1226 they, according to some sources, were both Roman senators. The legal age for marriage in medieval times was 12 years old.[11] By 1209, the earliest time she may have met Saint Francis she would have been 19. If both Giacomo and Giovanni were already born, they would have been young lads when their father died, a little more than 8 years old and they would have been at least 17 years old when Saint Francis died in 1226. We are left with questions. If we go for the death of Grazione in 1212 as some have suggested then we have a different situation, which might explain why the sources are silent about any relationship between Lord Grazione and Saint Francis and also speak of her long widowhood.

What perhaps may seems a little amazing to us is that her husband left her solely responsible for all of their property and wealth, the inheritance of their children. What is perhaps even more surprising is that members of the powerful Frangipani clan also left her alone and did not try to take over any of her many houses, castles and lands. It might seem, as some have suggested, that there may be more to Saint Francis’ ironic name for her as “Brother Jacoba” than simply a cheerful breaking of the enclosure. He knew Lady Jacoba was a very capable and astute woman who knew how to get things done, seemingly manly virtues at the time and so his joyful sense of irony may also been at play.

Perhaps we need to remind ourselves that she was a noble woman, from a noble family, carrying the weight of a long legendary family history, in complete control of all her social and financial affairs. This gave her enormous prestige and power in Roman society. Even if she did not exercise her power, others would have given her the deference due to her position. She was a noble woman of the house of Frangipani, a merchant family, and great merchant houses do not become great unless they are very well organized and every one of the family knows their place and responsibility. Lady Jacoba had enormous responsibilities for her family and the people that came under her protection and worked for her family. She was financially responsible for her house as well responsible for educating and preparing of her sons to take their rightful place in Roman society.

[1] The Normans were originally Norsemen coming from the area we now call Denmark, Iceland and Norway, who under their leader Rollo agreed to swear fealty to King Charles III of West Franca (France). Integrating with the local population they became Christian. Developing their own culture, from the 10th Century on, they became a rising military force of knights in Medieval Europe. The Norman, William the Conqueror, took England in 1066. King Richard Coeur de Lion (1157-1199) died in France where he lived except for six months in England when Lady Jacoba de Settesoli was 9 years old and Saint Francis 17. Lady Jacoba may have spoken French as well as Italian and Latin.

[2] There are over 24 dialects in Italy she probably spoke Tuscan or Venitian which were the domanent dialects.

[3] Other sources say she was born at Torre Astura, a fief of the Frangipani Family, an area where there is still a fortress tower which belonged to the Frangipani.

[4] Cardinal Stefano de Normandis dei Conti was born in Italy, most probably in Rome. He was a Nephew of Pope Innocence III. He was married and had one son, Filippo, who became a Franciscan Friar and a friend of Pope Alexander IV. When his wife died Stefano became a priest. He was created a cardinal at the beginning of 1216, by his uncle Pope Innocent III. He participated in the election of July 16-18, 1216 of Honorius III and again in the papal election of 1227 which elected Pope Gregory IX. He opted for the order of cardinal priests with the title of S. Maria in Trastevere in 1228. He restored the deaconry of S. Lucia in Septisolio. He became Archpriest of the patriarchal Vatican basilica in 1231. He participated in the papal election of 1241, in which Pope Celestine IV was elected. He participated in the papal election of 1241-1243, in which was elected Pope Innocent IV. He was Vicar of Rome from 1244 until 1251. He died December 8, 1254in Naples and is buried in the cathedral of Naples. Cf: http://www2.fiu.edu/~mirandas/bios1216.htm

[5] The Septizonium was built by the Emperor Lucius Septimius Severus. The origin of the name is from  Septisolium, from theLatinfor temple of seven suns,and was probably named for the seven planetary deities (Saturn, Sun, Moon, Mars, Mercury, Jupiter, and Venus) the concept is said to be North African. The Emperor was born in the colony of Leptis Magna in Libya and the Emperor’s name Septimius also means seven. Built in 203 A.D. it was originally divided into seven parts, but as a building it had no known practical purpose and was probably meant to be a decorative and somewhat showy façade to his palace. It is said to have been built after his wars in the East, but by 202 A.D. he began to expand the Roman occupation of North Africa.

[6] Franco Cardini, Professor of medieval history at the University of Florence, says that Settesogli means “the Seven Thrones” not “Seven Suns”. Cf: http://www.sanfrancescopatronoditalia.it/blog-francescani/voglia-di-mostaccioli-391

[7] Franco Cardini, says that the name is “Mortariolum” because the ingredients are crushed in a cooking morta, they belong to those variety of biscuits called “Mostacciolo”.

[8] Vittoria Colonna was born in Marino and was a friend of Michael Angelo and influential along with the Duchess of Camerino in the foundation of the Capuchin Friars.

[10] Other sources say he died in 1212 which would change the time line presented above considerably.

[11] Medieval marriages among the elites were arranged in a way that would meet the interests of the family as a whole. Marriage could also take place anywhere and minimum age for girls would have to be 12 while 14 for boys. Cf. Bardsley, Sandy (2007-01-01).Women’s Roles in the Middle Ages. Greenwood Publishing Group.