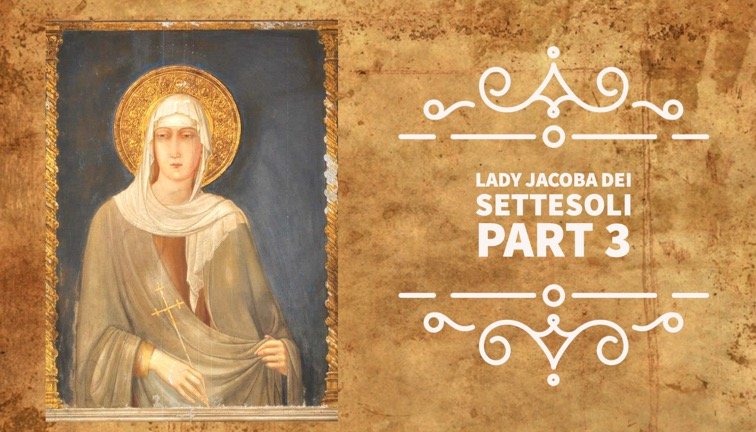 It was most likely as the sources say, that Saint Francis met Lady Jacoba in 1209 when her husband Lord Grazione was definitely still alive. By then she would have been 18 years old and already most probably the mother of two boys, Giacomo and Giovanni. It has been suggested that her relationship of spiritual direction with Saint Francis began about 1209 when he and his first eleven companions went to Rome to seek approval of their Rule of Life from Pope Innocent III.

It would seem that arriving in Rome to gain approval for their Rule of Life, these 12 friars stayed at the hospice of San Biagio in Trastevere.[1] From there they would have walked to the Lateran Basilica and the attached Papal Palace where the Pope lived in those times. The arrival of Saint Francis and his companions on their way to see the Pope is today cast in a huge group of bronze statues[2] outside the front of the Lateran Basilica. The monument is across the road as you look towards the Church of Santa Croce in Gerusalemme. The sources are seemingly in conflict as to just how Saint Francis managed to meet Pope Innocent III for the very first time. One source, Matthew of Paris[3] tells us that it was simply a matter of Saint Francis getting past all the guards, and going right up to the pope, who was walking up and down meditating in the Hall of Mirrors in the Lateran Palace. Now to set the scene more fully you have to understand that the Pope at this time was greatly concerned about the state of the Church and its need for reform. He was also worried about heretics in southern France and the launching of another Crusade. He was probably praying for an answer to all his troubles unaware that the answer had quietly and humble walked up behind him. According to this Benedictine chronicler the Pope turned around and was quite stunned to find a dirty beggar in front of him. Saint Francis immediately begins telling him about his Rule, but the pope starts shouting at him, “Go, brother, find the pigs, you look like one of them, give them your Rule and preach to them!” The story is probably true because Pope Innocent III was “elegant in manners, fluent in speech, severe against the rebellious and contumacious, but benign towards the humble and devout. He was a defender of the faith.” [4] (Any way I want it to be true, because it’s great drama and because of the irony of the situation). It is said that Saint Francis did exactly what he was ordered to do.

Whatever actually happened, it quickly involved Bishop Guido of Assisi, since Saint Francis must have mentioned that they were “Poor Penitents from Assisi”. We are told that Bishop Guido was vexed. (So something certainly went wrong) It was Bishop Guido who then took Saint Francis to see the rather extraordinary Cardinal John of Saint Paul, who was responsible for dealing with all new religious groups in the Church. Such was his status that it would be amazing if Cardinal John of Saint Paul did not know Lord and Lady Grazione Frangipani. In fact it might have been the Cardinal who recommended Saint Francis to Lady Jacoba as a personal spiritual assistant. But we just do not know how Lady Jacoba and Saint Francis met.

What we do know is that when Pope Innocent III verbally approved the Rule of 1209 the friars were also given the tonsure of religious and allowed to preach. Saint Francis was certainly made a deacon at some time before the Christmas of 1223 when he served Mass as a deacon. He was given permission to preach in 1209. The sources say that Lady Jacoba heard him preaching in one of the churches of Rome and sought him out for spiritual advice and he became her spiritual advisor and friend. If this is true and they met in 1209 then all of the early companions of Saint Francis would have been well acquainted with this noble Roman family at the very beginning of the Order. The evidence however for a 1209 meeting with Lady Jacoba cannot be proved, but Saint Francis was again in Rome for the Lateran Council in 1215. What is sure is that this very wealthy Lady Jacoba dei Settesoli by 1219[5] came to play a very important part in the life of Saint Francis and of the friars.

Despite the opportunity to live luxuriously, Lady Jacoba began to follow a model of perfection suggested by Francis, leading a life of simplicity and humility and placing at the disposal of Christ her wealth and her power and teaching her children to do the same. In this she brings to Franciscan spirituality a third way of following Saint Francis of Assisi. She chose to live a simple life in the midst of great wealth. She found, as would Saint Elizabeth of Hungary[6] that she was responsible for others, especially the poor. It is not that she did not know this already, she was renowned already for her charity, but something changed in her way of life and she was challenged in a deeper way. In Saint Francis she discovered an enigma, an irony – here was a poor man for in all intents and purposes externally a beggar – yet he wanted nothing from her. In fact she quickly realised that she needed something from him – a new spiritual vision.

Ultimately, the wealth of the Frangipani belonged to the family. The patrimony of her husband Lord Graziano was the inheritance of Giacomo and Giovanni her two sons, eventually they would become Roman Senators. In many ways Lady Jacoba understood the meaning of stewardship as did Queen Blanche of Castile  [7] the mother of Saint Louis King of France, who was twice regent for her son, from when he was crowned at the age of 12 until he attained his majority and again when he went on crusade for 6 years. Both women influenced their sons in a powerful way for the good of others. Stewardship demands a responsible use of finance not only for personal use and security, but also for the welfare of others. Yet Saint Francis brought something new. It was simplicity of spirit; a simplicity of life.

St Francis had a unique way of giving her spiritual direction even when he was not there to talk to her. Spirituality is lived each day in the real world of the present. Saint Francis continued his spiritual direction of Lady Jacoba in the most gentle and beautiful way. Saint Bonaventure and others tell us that when he was in Rome Saint Francis had left Lady Jacoba a lamb which reminded him of the “Lamb of God”. It was from the wool of this lamb that she would make the cloth that she would later bring to him on his death bed. We are told that this lamb was quite extraordinary. Because Saint Francis had given it to her she treated it like a pet and she allowed it to follow her around more like others would have a dog or a cat. She even took it to church! Or more correctly it quickly understood Lady Jacoba’s daily routine and strangely made sure she stuck to a regular timetable for prayer. In chapter seven of his Major Life of Saint Francis, Saint Bonaventure tells us about this lamb that Saint Francis gave to Lady Jacoba:

Once in Rome, Saint Francis had a lamb with him which he kept out of reverence for the most gentle Lamb of God; and when he was leaving, he gave it to Lady Jacoba di Settesoli to keep. The lamb accompanied its mistress to church and stayed there by her side, refusing to leave until she left, just as if the saint had trained it in its spiritual exercises. When she was late in getting up in the morning, the lamb nudged her with its horns and roused her with its bleats, urging her to hurry and get to church. She was amazed and became very fond of the animal which had been a disciple of Saint Francis and was now a master of the religious life.

In her extremely complicated world with all her responsibilities Saint Francis taught Lady Jacoba dei Settesoli how to live a very simple life from one day to the next, in a spirit of prayer and devotion.

[1] Prior to the 13th Century, San Francesco a Ripa in Trastevere was the site of the Benedictine church of San Biagio (St Blaise), a monastic complex consisting of a hospice and a hospital for pilgrims entering the city of Rome through the Porta Portuensis (gate of Portuensis).

[2] This monument shows Saint Francis standing with his arms outstretched facing the Basilica of Saint John Lateran. The other friars are kneeling beside him. It is the work of the artist Giuseppe Tonnini and he began construction of it in 1225 for the 700th anniversary of the death of Saint Francis in 1926.

[3] Matthew of Paris was an English Benedictine monk who wrote a Chronica Maior (Cir. 1259) This incident was referred to by L. Lemmens TESTAMONIA MINORA, 29-30. (a digest of minor references and testamonies) A second source for this incident is found in the Chronical of the XXIV Generals (AF.III, 365) Jerome of Ascoli was told this story by Richard Cardinal degli Annibaldi (created Cardinal by Pope Innocent III his uncle) who learned it from his uncle. Jerome inserted this incident into the Major Life of St Bonaventure Ch3. 9 “sent him away indignantly” however you can still find it in the Omnibus of Sources p.651, but it has been removed from “The Founder” p. 547.

[5] Alberto Crielesi says Lady Jacoba from 1219 “had become a most valuable collaborator of the newborn Franciscan movement in the city of the Popes.” He gives that date for her meeting Saint Francis for the first time.

[7] The Franciscans arrived in Paris in 1219 when Saint Louis (later King) was only 5 years old.