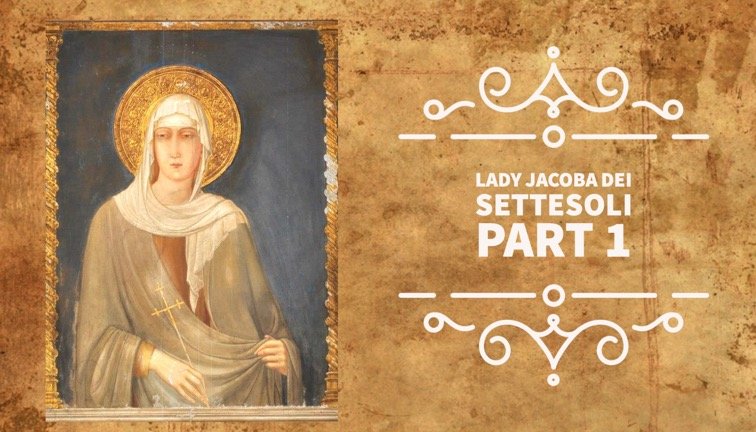 Very shortly, if not already, the Secular Franciscan Order in this area of the world will no longer be called Oceania. New Zealand became a separate reality and now also Singapore and Saba have been set up as a separate fraternity. New Guinea was also removed from the jurisdiction of Oceania. In searching for its own identity in the new millennium the Secular Franciscan Order of Australia needs to choose a national patron (oddly enough it seems we don’t have one). Each of the Regional fraternities in Australia have Regional patrons and all local fraternities also have a patron. I believe, as do others, that we could look more closely at the life of Lady Jacoba de Settesoli for inspiration. Obscure in many ways, probably because of the glory of other Franciscan saints, she was one of the first members of the “Brothers and Sisters of Penance” founded by St Francis in 1221 later called “The Third Order of St Francis” and now called the Secular Franciscan Order. This extraordinary friend of the friars is an excellent example to give us a better understanding of the place of the Secular Franciscan Order today in its relationship with the rest of the Franciscan Family and the Church.

Lady Jacoba de Settesoli was recognised by all the friars as probably the most important lay person in the life of Saint Francis and as a great benefactor of the Order. Her close friendship with Saint Francis is honoured by the friars in the fact that today this woman is buried in the crypt of the Papal[1] Basilica of St Francis in Assisi along with St Francis and four of his early and most dear companions: Br Rufino, Br Angelo, Br Masseo and Br Leo.

Today, as the Secular Franciscan Order, is searching for a clearer understanding of its role in the 21st century, the place of Lady Jacoba among the very first members of the “third Order” in early Franciscan history is more important than ever before. Jacoba had great wealth and responsibilities yet in her the spirit of St Francis adapts itself and shines forth in a new and authentic way. Like St Elizabeth of Hungary and St Louis IX, King of France, both patrons of the Secular Franciscan Order, the spirit of the Poverello expresses itself in a life of Gospel fraternity so much so that St Francis himself declares her to be “Brother Jacoba” one of the friars.

Each year, on the 3rd of October, when we celebrate the death of St Francis of Assisi in what is called the Transitus ceremony, we     hear the story about how Lady Jacoba de Settesoli arrived in Assisi just in time to fulfil the wishes of the dying saint.

In his very last days, suffering greatly, he asked the friars to send for her, telling them to write and ask specifically for “a burial shroud, some candles and some of those sweet almond biscuits that she always made for him when he came to Rome”.[3] But before they could even do so Lady Jacoba, already warned by divine inspiration of his imminent death, arrived at the friary of the Portiuncula in the valley below the Town of Assisi.[4] Even more surprisingly she had not only brought with her the sweet almond biscuits he had asked for, but also the candles and a new habit she made for him from the undyed wool of the sheep that he had previously given to her as a pet.

However, immediately there was a crisis. Francis was far too ill to come out to see her, his health far too fragile even to move him, and the strict rule of enclosure imposed on religious made it impossible for a woman to enter the friary. The friars in complete confusion came to ask St Francis what they were to do in this situation. St Francis with his joyful spirit of fraternity said to them, “Let her come in immediately; the rule of cloister does not apply to ‘Brother’ Jacoba!” So Brother Jacoba came in and was present when St Francis died and he was buried in the habit she brought to him. Such is role that Lady Jacoba plays in the Transitus of St Francis each year, but there is much more to her story than that.

[1] Pope Benedict retired the title “Patriarch of the West” from papal titles on the 22 March 2006 since it has rarely been used and is now considered obsolete. So all Patriarchal Basilicas are now Papal Basilicas.

[2] Pope Benedict XV January 6th 1921: (On the Seventh Centenary of the Third Order of Penance)  Sacra propediem No 4. The striking and immortal services rendered by Francis to the Christian cause, … found, as it were, their coronation in the Third Order. Sacra propediem No. 10. What Francis wished to shine out, above all, in his Tertiaries, and which ought to be as their characteristic mark, is fraternal charity, most watchful guardian of peace and concord.

[4] The distance from Rome to Assisi is approximately 150 miles or 241Km. At a walking speed of 20 kilometres a day it could take 12 days.