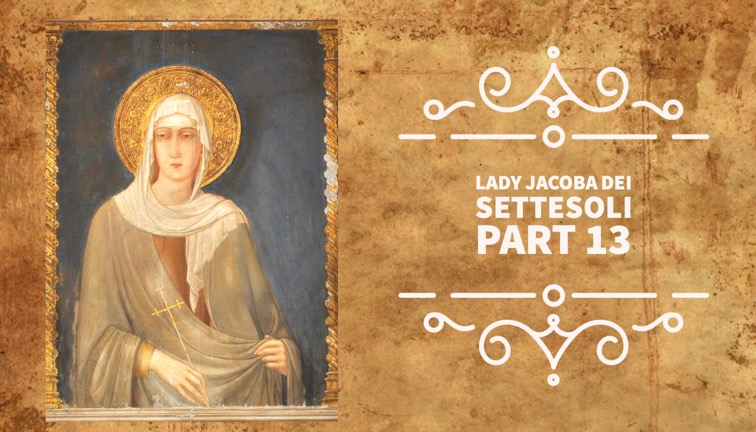 In the last days of Saint Francis’ life, the arrival of Lady Jacoba dei Settesoli, from Rome was anything but quiet. She arrived at the Portiuncula Friary, “with a very large retinue as befitted such a great lady … there was a very great clamour outside the door, caused by the horses and attendants of this devout disciple. She had arrived to visit her most illustrious father and teacher.” She waited with respect for the friars to allow her to see Saint Francis. Perhaps she knew that Saint Francis had placed a strict enclosure on the Portiuncula Friary, so as to guard its spirit of prayer and contemplation. But Saint Francis immediately found a fraternal way around his prohibition calling her Brother Jacoba and so she was brought in to see him. “When the saint saw her, he rejoiced that, as he had hoped, she had been sent by God. After recovering a little in the joy of seeing, her, it was thought the saint would live longer. Lady Jacoba, therefore, decided to send back part of her retinue, so that she might wait for the saint’s end with fewer attendants. But the saint forbade this. “I will depart on Saturday evening,” he said. “You can leave with your retinue on the following day.”” This quote is not from Celano, but Br Bernard of Besse, the secretary of Saint Bonaventure.[1]

Lady Jacoba had not only brought with her all the things Saint Francis requested in his letter to her, but she also brought everything she thought necessary for his funeral. By divine inspiration, she knew Francis was dying, and she intended to lavish upon him in death what he would never have allowed her to do in life. She brought with her from Rome to Assisi a red silk cushion finely embroidered with gold thread and studded with pearls.[2] His head rested on this cushion as his body lay in the church of San Giorgio in Assisi. She had also brought with her a very sheer silk wedding veil, beautifully embroidered with almost transparent silk that was placed over his face when he died.[3]

As his body was moved, first up to San Damiano so that Saint Clare and her sisters could say goodbye to him and see for themselves the sacred stigmata, Lady Jacoba accompanied the funeral procession along with friars, citizens of Assisi and armed guards, probably among them some of her knights. Celano tells us of the grief of Lady Clare and her Sisters at the loss of their spiritual father. In his own particular way, he puts in their mouth the cry of earlier monks at the death of an earlier saint: “Father, O father, what shall we do?”[4] Once the Poor Clares had said their farewell to their beloved spiritual father, the procession moved up into Assisi and to the Church of Saint George[5] inside the walls of Assisi.

In this church, the body of Saint Francis was laid out for his funeral. He was already dressed in the habit made from the cloth Lady Jacoba had brought with her from Rome that she had shorn from the sheep Saint Francis had given her as a pet, but now Lady Jacoba also dressed up the body of Saint Francis in two drapes adorned with flowers and birds embroidered in golden thread.[6] His head rested on the red silk cushion also embroidered with golden lions and eagles and dotted all over here and there with pearls. To complete this picture, she brought a great number of beeswax candles to surrounded the body so that Saint Francis as he lay there in death shone and glittered like he was already a saint in heaven. Lady Jacoba dei Settesoli had already canonized him.

Thomas of Celano tells us that news of the death and the stigmata of Saint Francis spread like wildfire and people from Assisi and the surrounding areas rushed to see the body of the saint displayed under armed guard. He says more than 50 friars saw the stigmata not counting the stream of lay people coming into the church. As the pilgrims passed by to view the body of the Saint, with the sacred stigmata now revealed for all to see, they would have been amazed and perhaps surprised at the sight of Saint Francis dressed in such finery all sparkling in the candle light, a saint in earthly glory. They came in great numbers to say goodbye to “Francesco” baptised “Giovanni” the son of the merchant, Pietro Bernadone, and his French wife, Lady Pica. They would have been somewhat in awe of being in the presence of the body of their saint whom most of them had met, or seen, or heard preaching in their churches and streets. To them, in life, he would have seemed so little, ragged and poor, but with lively shining eyes, now, seemingly asleep he shone with all the earthly glory of the Church on earth.

Lady Jacoba, strong minded, and in no doubt of his sanctity, intended that all who came to pray and say goodbye to brother Francis that day would know they were in the presence of a great saint. She saw, without a doubt the irony in what she had done. In life, he would have had none of it, but in death, he had no choice. It would have given her great joy to do this for him now in death, knowing only too well that he would not have approved of it at all. The fact that she did it, showed her great love and esteem for him. It also showed her medieval, grand, Roman sense of Church.

It was not long before miracles were being reported, not just in Assisi, but from many different places. Today these miracles are little known, but they would have given rise to a great confidence in the people that Saint Francis was indeed a miracle worker, and they would have come to Assisi in great numbers seeking his help in their many needs.

After the funeral, Br Elias of Cortona, who had been elected the Vicar General of the Order in 1221, took the old habit of Saint Francis, the cushion of Lady Jacoba, and a copy of the Gospels that belonged to the saint to the friary in Cortona where they remain to this day.

Historical and scientific research[7] in 2007 validated the relics at Cortona to the time in which Saint Francis lived. The tests showed the three relics in the Friary of the Conventual Franciscan Friars in Cortona date from 1155 AD to 1225 AD, roughly contemporary with the saint. Palaeographic experts at the University of Siena say that the handwriting in the Gospel Book is in the same style used during the saint’s period.

Researchers also analyzed the composition of the precious metal thread used to embroider the cover of the cushion on which the Saint’s head was placed upon his death, and they used the carbon 14 method to date the fabric of the cushion itself. Moreover, the book of gospels was subjected to in-depth codicological and paleographic investigations by researchers at the University of Siena. Based on both the scientific evidence and humanistic research, the cushion and the book of gospels were also found to date back to the period in which Saint Francis lived.

In the Chapter of 1227, Br Elias was replaced as Minister General by Br John Parenti, who became first Minister General. Relieved of responsibility for the entire Franciscan Order, Br Elias was able to focus his attention on the building of the Lower Basilica in preparation for the translation of the body of Saint Francis to its final resting place.

After all the events and ceremonies that laid Saint Francis to rest in the church of Saint George in Assisi, Lady Jacoba went back went back to Rome, to her prayers and good works for the next two years. Some sources suggest that, as a Sister of Penance[8]Lady Jacoba organized a fraternity of Franciscan laity in Rome to assist those in need and that she was a humble woman despite being aristocratic and extremely wealthy.

[1] See: Saint Francis of Assisi: Early Documents. The Prophet. “A Book of the Praises of Saint Francis” by Bernard of Besse. Chapter VIII. pages 66 & 67.

[2] Pearls were extremely rare and precious at this time and continued to be so until cultured pearls were perfected by Kokichi Mikimoto, in Japan in 1893.

[4] Early Documents.The Saint. Footnote a. p. 285. Before the death of Saint Martin, the monks cry out: “Why are you abandoning us, father? To whom have you left your forsaken?”

[8] At the time, the lay followers of St Francis were known as Brothers and Sisters of Penance of Assisi. Only later were they called “the Franciscan Third Order”. It was not until 1978 that they were called the “Secular Franciscan Order” with the Rule of Pope Paul VI.