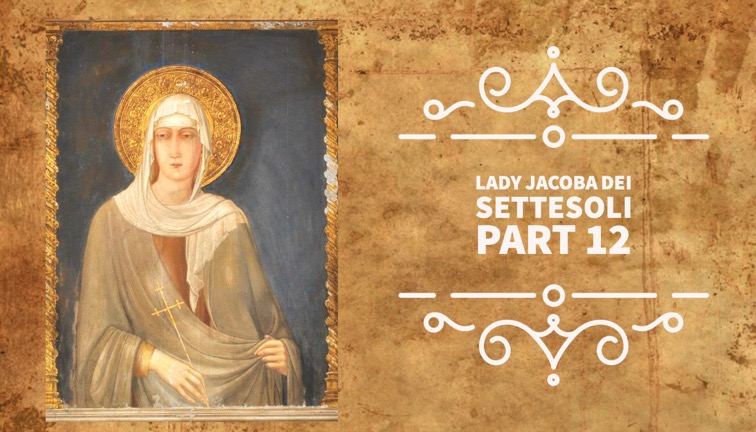 Thomas of Celano tells us in his Treatise on the Miracles[1] the same story as we have heard before, but with his usual flare he gives Lady Jacoba and her son all the respect of their nobility. But he also gives us something new in Number 39 that we certainly do not find in the previous document.

The saint was bedridden with that illness by which, putting off all his weariness, he was about to complete the race with a blessed ending. A few days before his death he decided to send for Lady Jacoba in Rome, telling her that if she wanted to see the one whom she so loved so warmly as an exile, she should come with all haste, because he was about to return to his homeland.

A letter was written; a messenger noted for his swiftness was sought and, once found, was outfitted for the journey. Just then there was heard at the door the sound of horses, the commotion of knights, the crowd of an escort. One of the companions, the one who had given instructions to the messenger, went to the door and found there present the one whom he sought because absent. He was struck with wonder and ran very quickly to the saint. Unable to restrain himself for joy, said, “I have good news for you, father.” Without a pause the saint immediately replied, “Blessed be God, who has brought our Brother Lady Jacoba to us! Open the doors and bring her in. The decree about women is not to be observed for Brother Jacoba!”

So the lady gave orders that the rest of her escort should leave: she alone with her children[3] and a few attendants would remain. But the saint said to her, “No, don’t! I will depart on Saturday, and on Sunday you and all the others will return.” And so it happened. At the predicted time, he who had fought valiantly in the Church militant entered the Church triumphant. I omit here the crowds of people, the shouts of rejoicing, the ringing of bells, the streams of tears. Likewise I leave out the mourning of his sons, the sobbing of those dear to him, the lament of his companions. I want to recount only how this pilgrim, deprived of the solace of her father, was consoled.

Right then she counseled that such an unheard-of miracle should not be disguised or hidden any further. Rather, she wisely advised it should be displayed for all to see with their own eyes. All ran eagerly to see this sight. They were able to verify for themselves that God had not done thus for any other nation and stood in awe.

Here I will put down my pen rather than stammer over something I cannot explain. Giovanni Frigia Pennate,[4] who was then a boy, and afterwards a Roman proconsul and Count of the Sacred Palace, freely swears and declares, against all doubts, that at that time he was with his mother, and that he saw with his own eyes and touched it with his hands. The lady pilgrim may now return to her homeland, comforted by this privilege of grace.

Thomas of Celano tells us that it was Lady Jacoba, who declared that the sacred stigmata should be displayed for all the people to see. He backs up the authenticity of the five wounds by saying her son, Giovanni, Frigia Pennate also saw and touched them.[5] He wanted to guarantee the value of this witness, by adding that he was afterwards a Roman Proconsul and Count of the Sacred Palace.

Some have said that the words “Friga Pennate” are a mispronunciation of “Frangi pani.” However, Celano is giving us Giovanni Frangipani’s full title. “Friga” translates as “Phrygia”. The Phrygians were close allies with the Trojans during the Trojan War. In fact Hecuba the second wife of King Priam of Troy was the Phrygian mother of Prince Hector. Aeneas and Hector were second cousins.

The word “pennate” can be translated as feathers or wings or winged. “Frigia Pennate” hails back to the legendary origins of the Frangipani family in ancient Troy reminding others that according to legend this boy, Giovanni Frangipani, the son of Lady Jacoba dei Settesoli is a descendant of the noble Trojan, Prince Aeneas. “Together with his elderly father, his son and many people Aeneas escaped towards the lands of Lacinium, carrying the Pennate gods” (Winged gods or Guardians of their house or city). In the Aeneid by Virgil Book III, we find “…but who could then have thought that Phrygian gods to Latium should be brought.” Thomas of Celano is simply honouring the nobility of Frangipani family legend saying that Lady Jacoba’s son Giovanni is an incredibly trustworthy and honourable witness to the stigmata. Quite obviously, by the time Celano is writing, he sees a need to present witnesses to the stigmata.

Lady Jacoba followed the body of Saint Francis to San Damiano, where Lady Clare and the sisters mourned his passing. Then they went on to the Church of Saint George up in the city of Assisi. It was here that Saint Francis had come to school so many years ago and learnt his lessons under the patronage of that Knight of Knights Saint George. It was here that the people of Assisi came to bid farewell to Francis Bernadone their fellow citizen. They saw the stigmata, like a seal on the body of Saint Francis and they witnessed the miracles that began almost immediately.

[1] Francis of Assisi Early Documents, “The Treatise on the Miracles of Saint Francis by Thomas of Celano” Chapter VI. Lady Jacoba dei Settesoli Nos 37 -39. p. 147. This can be found also in the Onmibus of Sources “Celano, Miracles Ch.VI Nos 37-39. p. 549

[2] We are told it was a red silk cushion with embroidered Lions of the House Frangipane and imperial eagles and her bridal veil white silk worked with diamonds and lilies on which were embroidered with letters in silk and gold the words: “ama, ama, ama”. (loves, loves, loves or I love) Using a radiocarbon dating method, in 2007 physicists at the Italian Institute for Nuclear Physics (INFN) in Florence, Italy, analyzed material fragments from the tunic assumed to be relics of Saint Francis, preserved in the Church of Saint Francis in Cortona in Italy. The tunic in Cortona, was made between 1155 and 1225.Also in this church there is the pillow and a gospel book. LABEC researchers also analysed the composition of the precious metal thread used to embroider the cover of the cushion on which the Saint’s head was placed upon his death, and they used the carbon 14 method to date the fabric of the cushion itself. Moreover, the book of gospels was subjected to in-depth codicological and paleographic investigations by researchers at the University of Siena. Based on both the scientific evidence and humanistic research, the cushion and the book of gospels were also found to date back to the period in which Saint Francis lived. It is said that Br Elias carried these relics to Cortona.

[3] Celano has said, “her children” were both James and John there with her.

[5] Did Celano actually meet Giovanni the son of Lady Jacoba? It would seem that he did because he gives him his full family title Giovanni Frigia Pentate, but where is James her other son? Was he not also a witness? Was he dead by the time Celano was writing?