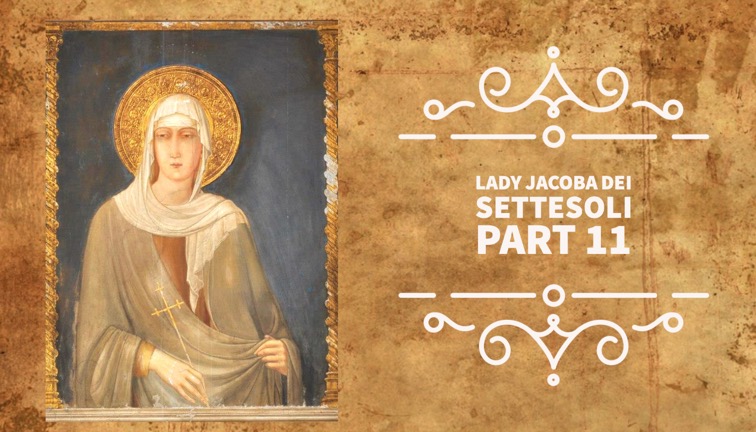 Saint Francis would move from San Damiano to the Episcopal Palace of his friend and spiritual father, Bishop Guido of Assisi. While he is there, both the Bishop and the Mayor of Assisi realise that Saint Francis had only months to live. The situation became charged with emotion; everyone began to panic about what would need to be done when Francis died. It was not just a religious question of who would be in charge of any processions to the burial place; it was a civil problem as well. There was the matter of security and public order. The situation became emotionally out of control when Bishop Guido and the Podesta (Mayor) got into a terrible fight, and the Bishop completely lost it and excommunicated the Mayor demanding that no one should henceforth have anything to do with him – the whole town of Assisi was scandalized.

It was in the midst of this crisis that Saint Francis turned his spiritual attention to the question of humanity and our greatest grace through which, we achieve our highest good. The next verse of his Canticle of the Creatures calls us to give praise to God in a way that is profoundly human and perhaps the most precious thing about human beings. Saint Francis first focuses on our ability to pardon each other, because of God’s love for us, and then secondly on our ability to bear infirmity and tribulation. He says “Blessed are those who endure in peace for by you Most High shall they be crowned.”

Saint Francis discovered at that moment that the crowning glory of humanity is our ability to pardon each other and to endure and offer up suffering as a sacrifice of love. It is an extraordinary insight that comes out of his clear understanding that evil done to us can be offered as a sacrifice to God, and become a source of perfect joy. It is the very key to fraternity. Even among the friars, the sisters, and the Seculars, when everything gets out of control and emotions are running high, it is this grace of forgiving each other and bearing the pain of that commitment in peace that restores the fraternity.

In the crisis in the city of Assisi, Saint Francis found the answer and teaching this new verse to the brothers he sent them out into the town to sing it to the people, to the Podesta and the Bishop. The effect of this singing was powerful and immediate. The Bishop and the Mayor were reconciled. Bishop Guido, was so embarrassed by his foolish behaviour, that he left Assisi to make a pilgrimage to the sanctuary of Saint Michael the Archangel, in the province of Foggia.[1] This was a very strange thing to do, if he thought Saint Francis was going to die very soon. He must have been bitterly sorry for having caused such a terrible scandal, and we must conjecture that Saint Francis had assured him, that he should not to worry about going on this journey, because he would see him again.[2]

However, after the Bishop left Assisi the health of Saint Francis took a turn for the worse and he asked to be taken down outside the city walls of Assisi to the little church of Our Lady of the Angels. He asked them to stop once on the journey and help him sit up facing the town of Assisi. Then although blind he looked out towards the town of his birth and gave it his blessing. Only then did the friars continue on and place him inside a small cell just behind the Portiuncula Chapel.

One day blessed Francis called his companions to himself: “You know how faithful and devoted Lady Jacoba dei Settesoli was and is to me and to our religion. Therefore I believe she would consider it a great favour and consolation if you notified her about my condition. Above all, tell her to send you some cloth for a tunic of religious cloth the color of ashes, like the cloth made by Cistercian monks in the region beyond the Alps. Have her also send some of that confection which she often made for me when I was in the City.”[4] This confection, made of almonds, sugar or honey, and other things, the Romans call mostacciolo. That spiritual woman was a holy widow, devoted to God. She belonged to one of the more noble and wealthy families of the entire City.

Through the merits and words of blessed Francis, she had obtained such grace from God that she seemed like another Magdalene,[5] always full of tears and devotion for the love of God. After the letter was written, as dictated by the holy father, while one brother was looking for another one to deliver the letter, there was a knock at the door.

When one of the brothers opened the gate, he saw Lady Jacoba who had hurried from the City to visit blessed Francis. With great joy, the brother immediately went to tell blessed Francis that Lady Jacoba had come to visit him with her son[6] and many other people.[7] “What shall we do, Father,” he said, “shall we allow her to enter and come in here?” He said this because blessed Francis a long time ago had ordered that in that place no women should enter the cloister out of respect and devotion for that place.

Blessed Francis answered him: “This command need not be observed in the case of this lady whose faith and devotion made her come here from so far away.” And in this way, she came in to see blessed Francis, crying many tears in his presence. It was amazing: she brought with her shroud-cloth, that is, gray-colored cloth, for a tunic, and all the other things that were written in the letter.

This made the brothers greatly marvel at the holiness of blessed Francis. “While I was praying,” Lady Jacoba told the brothers, “a voice within me said ‘Go, visit your father, blessed Francis, without delay, and hurry, because if you delay long you will not find him alive. Moreover, take such and such cloth for his tunic, as well as the ingredients for making that particular confection. Take with you also a great quantity of wax and incense.’” Blessed Francis did not have incense written in the letter, but the Lord Himself willed to inspire that lady as a reward and consolation for her soul. In this way we would more easily recognize the great holiness of that saint, that poor man, whom the heavenly Father wished to honor so greatly in the days he was dying.

He inspired the Kings to travel with gifts to honor the child, His beloved Son, in the days of His birth and His poverty. So too He willed to inspire this noble lady in a faraway region to travel with gifts to honor and venerate the glorious and holy body of His servant the saint, who loved and followed the poverty of His beloved Son with so much fervor and love in life and in death. One day that lady made that confection the holy father wanted to eat. He ate only a little of it, however, since he was near death, and daily his body was becoming weaker on account of his illness. She also had many candles made which would burn around his holy body after his death. From the cloth she had brought for his tunic, the brothers made him the tunic in which he was buried. He, himself ordered the brothers to sew pieces of sackcloth on the outside of it as a sign and example of most holy humility and poverty. It happened, as it pleased God, that during the same week that Lady Jacoba arrived, blessed Francis passed to the Lord.

It would seem that Lady Jacoba kept herself busy while she was in Assisi by making the almond biscuits, seeing that a new habit was made and that many candles were made for the funeral rites when Saint Francis died.[8]

[1] The Sanctuary of Monte Sant’Angelo (490AD) is about 20 kilometres from San Giovanni Rotondo where Padre Pio lived. It is the oldest shrine of St Michael the Archangel. Legend says that he appeared there three times in a cave, standing on an ancient altar stone, which he consecrated by his presence. He said to the Bishop to whom he appeared, “I am Michael the Archangel and I am always in the presence of God. I chose this cave as sacred to me. There will be no more shedding of bull’s blood in this cave. Here where the rocks open widely, the sins of men may be pardoned. What is asked for here in prayer will be granted. Therefore dedicate this place to the Christian God.” Bishop Guido came here seeking pardon.

[2] In fact Saint Francis died when Bishop Guido of Assisi was on his return journey to Assisi from his pilgrimage to mount Gagano and the Shrine of Saint Michael – Knight Commander of the heavenly host. The epitome of knightly good manners.

[3] Assisi Complilation 8. It declares itself to be from “We who were with him.”

[5] It is a powerful image to say that Lady Jacoba was so filled with a spirit of prayer and devotion that she seemed like another Mary Magdalen.

[6] “With her son” Where was the other son? Which son? Lady Jacoba has two sons! James or John?

[7] A retinue of Knights and retainers that have come with her from Rome.

[8] We who are so blessed by having electric light perhaps do not appreciate the power of even one candle to dispel the darkness of the night. The electric light bulb was not invented until the 1870’s. Although Gas Street lights were introduced to Sydney in the 1820’s Tamworth in NSW was the first Australian city to have electric street lights.