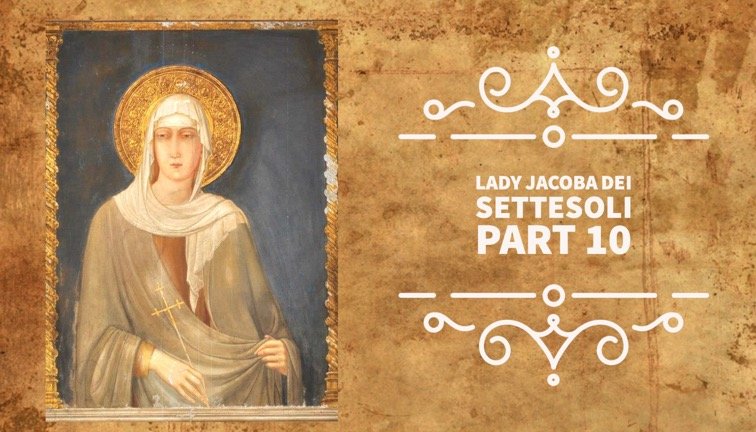 Francis was given Cardinal Hugolino as Protector of the Order, and Saint Francis stayed with Cardinal Hugolino from about June 23rd, 1225 to February 26th, 1226 (seven months). It In September of 1224, Saint Francis spent a forty-day fast on Mount La Verna with Br Leo. He was honouring the Blessed Virgin Mary and Saint Michael the Archangel.[1] There on the mountain of La Verna we are told that he was meditating on the passion of the Lord and this meditation was enhanced by the very cleft in the side of the mountain itself, which spoke very powerfully to him of the wound in the side of Christ. [2] Little did he realise that his prophetic sermon before Count Orlando of Chiusi della Verna, beginning with the words “So great the good I have in sight, that every pain I count delight!” was about to come true.

One morning near the feast of the Exaltation of the Cross, a six-winged angel, a Seraph, appeared before Francis while he was praying high on the cliff face of the mountain. As the angel approached, Saint Francis could see that “within its six wings there was the form of a very beautiful, crucified man, whose hands and feet were extended after the manner of a cross, and whose features were clearly those of the Lord Jesus. Two wings covered his head, two, the rest of his body down to the feet, and two were extended as if for flight.”[3] Saint Francis was awed by the sight, and his heart was filled with a three-fold divine irony of joy, suffering, and compassion all at the same time, and he went into an ecstasy. When the Seraphic angel[4] departed and Saint Francis came back to himself, he discovered that he was wounded in his hands and feet, – his side also was pierced as if by a lance.

He was overwhelmed by experience since such a thing had never been heard of before. It was the beginning of this type of mystical phenomena in the Church,  [5] but the stigmata of Saint Francis was unique in that the shape of nails immediately appeared in his hands and feet; it was not simply a wound in his flesh. In the centre of the wounds of his hands and feet there formed of his flesh what seemed like nails, with the head of the nail in the palm of his hand[6] and the end of the nails bent over on the back of his hands and feet. This made it almost impossible for him to walk. The wound in his side from this time on often seeped blood and stained his habit.[7]

By 1225 the health of Saint Francis had begun to deteriorate. He had not looked after himself all that well and even admitted that he had treated “brother ass” his body, poorly. Perhaps, worst of all, his eyesight began to fail. It is said that overcome with compassion for the suffering Christ, his Lord, and his Brother, Saint Francis’ constant crying contributed to his failing eyesight.

The friars were alarmed by his deteriorating health, and he was taken to Rieti where the papal court had assembled because an uprising in Rome had forced the Pope to leave the city.[8] During 1225 Saint would seem that Saint Francis was not always in the house of Hugolino at Rieti, but stayed at the Fonte Colombo[9] Hermitage, which is only about 4 kilometres away in the mountains above Rieti. Cardinal Hugolino called the best physicians to help him, but even though they took desperate measures the failing eyesight of Saint Francis could not be cured. In fact, he underwent a terrible treatment where hot irons were pressed to his temple in an attempt to shock his eyes back into better sight, and although he felt no pain from this strange procedure, it did not help his eyesight at all.

About this time Lady Jacoba dei Settesoli, either in Rome or Rieti, since the revolt in Rome had disturbed the peace, had a picture of Saint Francis painted. In this painting, he is standing, wearing a grey habit with a handkerchief pressed to his eyes. Much later when she left Rome to live her last days in Assisi, it is said that she gave this painting to the friars at Greccio. The present picture of Saint Francis weeping, which is at Greccio has a sign that says: “Real portrait of the Seraphic Patriarch San Francesco d’Assisi, commissioned by the pious Roman woman Giacoma de’Settesoli, when the patriarch was alive.” This picture shows him with the stigmata so it would certainly have been done after the 14th of September 1224. However, the Greccio painting is said by art critics to be a 16th century copy of an original.

In the summer of 1226, Saint Francis was in serious trouble with his health; they had taken him also to Sienna in search of a cure for his medical condition and returned to Assisi. There he spent some time with Saint Clare and her sisters at San Damiano, in a hut in the garden, which was so overrun by mice, that Saint Francis in his misery thought they were a diabolical plague. It was then, with nature itself causing him trouble, and very nearly blind, that he found the grace to begin or continue during his last days his extraordinary Canticle of the Creatures.

As nature, the environment, the world faded from his sight, he found a new inner vision of creation and a new voice through which he could express his appreciation of the creator. “All praise be yours, my Lord, through [10] all that you have made,..” [11]    Saint Bonaventure attempts to explain what was going on inside Saint Francis as he begins this synthesis of his mystical experience:

In beautiful things, he intuited[12] Beauty itself and through its footprints impressed in all things, he followed his Beloved everywhere. Making for himself, out of all creation, a ladder by which he could climb up, so as to embrace Him, who is so utterly desirable. With an intensity of unheard of devotion he savoured in each and every creature – as in so many rivulets – that fountain of all goodness, which flowed forth in all creatures. He seemed to perceive a divine harmony in the interplay of powers and faculties given by God to his creatures and like the prophet David, he fondly exhorted them to praise the Lord.” [13]

It would seem that Saint Francis was integrating his whole experience, his spiritual vision in this great Canticle. The very language he uses for this song is not Latin, but his own Umbrian dialect, which gives him greater poetical fluidity for this prayer which he asked the friars around him to learn by heart and then go out and sing to all the people.

Behind the symbol of Sir Brother Sun we see Francis speaking of the Father, that much is certainly clear. Behind the symbol of the Moon, we see the image of Christ reflecting the glory of the Father. Then hidden under the triple images of wind, water, and fire, we see the Holy Spirit blowing to life, watering the garden, lighting up the night. Then behind the icon of Sister, Mother Earth we find the Blessed Virgin Mary, who as mediatrix of all grace, feeds us with abundant fruits, and cheerful flowers and medicinal herbs – her divine Son. It is here that Saint Francis leaves his great canticle as a Franciscan paradise of praise. The coming events would show that he had not finished his symphony yet, even if he did not know it. He was yet to find his insight into where humanity fits into this cosmic vision.

[1] Legend Major 13:1 says his stay on La Verna was in honour of the Blessed Virgin from the 15th of August to the feast of St Michael 29th of September. St Francis had such devotion to St Michael that although he visited the cave of St Michael on Mt Gargano on the east coast of Italy, where many knights went to visit before becoming crusaders, he stopped at the entrance to the cave and prayed but out of reverence for St Michael he did not go into the cave itself.

[2] The first place St Francis visited after La Verna was the small hermitage of Montecasale. In the choir of this hermitage there is a picture of the passion of Christ on the cross and St Francis is kissing or drinking from the wound in the side of Christ.

[4] Some where there is a story or a reference to say that as the Seraphic Angels looked upon the crucifixion of Christ they burned with such love that they changed forever their appearance out of love for their crucified Lord. In this we are reminded of Elizabeth B. Barrett’s Poem “The Seraphim” where the two Seraphim Ador and Zerah from the steps of heaven look down to the scene of the crucifixion. It is also said, again somewhere that the mighty and terrifying Cherubim took on the image of a child because of their shining love for the babe of Bethlehem. However I have no reference for this beautiful insight.

[5] Since the time of St Francis there have been over 250 cases of stigmata. Outstanding among these the Capuchin Nun, St Veronica Juliana and the first priest St Pio of Pietrelcina and St Gemma Gulgani

[6] Bonaventure in his Major Life Ch XV No 2 says, “the nails were black like iron, but the side wound was red and the flesh [of the side wound] was contracted into a sort of circle, so that it looked like a beautiful rose”.

[8] At the end of April, 1225, an uprising in Rome had forced Pope Honorius to leave Rome and after a short stay in Tivoli he transferred his residence to Rieti, wher he remained until the beginning of 1226.

[9] The Franciscan Hermitage of Fonte Colombo is only about 4 kilometres from Rieti. It was there he wrote the Rule for the Friars and it was there that he placed his signature of a Tau on the wall of his cell. It is this Tau symbol at Fonte Colombo that is used by the Secular Franciscans as their official symbol for their Order.

[10] Here in this canticle we find the Italian word “per” it can be translated as “through”, “for”, “by”. The best understanding of it in the context of this canticle is given in Francis of Assisi. The Saint. Early Documents. Page 114 footnote a. This is a “must read” for an understanding of the mysticism of this Canticle.

[12] The Omnibus says “beheld” but in Francis of Assisi, The Founder, the footnote on page 596 says Celano uses words which mean, “gazes upon”; “discerns”; “reaches” but Bonaventure uses, “he rose”; he contuited”; “he would climb up”.