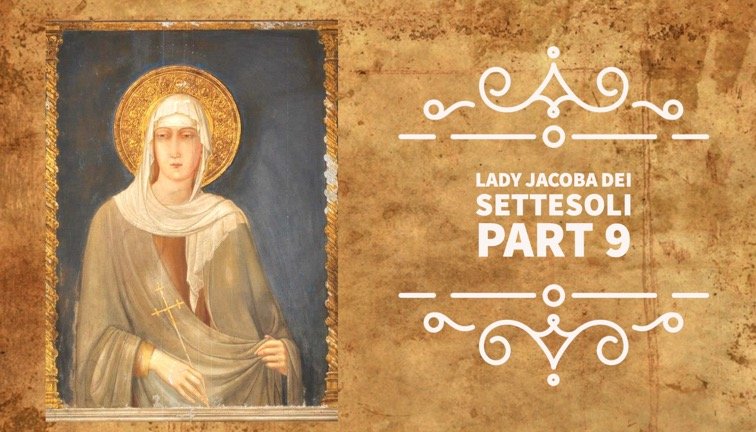 Tradition holds that during Saint Dominic’s second visit to Rome, in 1216, he met Francis of Assisi in one of the churches there. Both were negotiating with the Holy See through their mutual patron, Cardinal Hugolino, later Pope Gregory IX, to obtain papal confirmation of their respective orders.

In the face of Canon 13, it was argued that Saint Francis at least had a verbal approval of his Rule of Life from Pope Innocent III before the Council, so he was encouraged to write this Rule down and have it approved. However that was not an easy task. His Rule of 1221 was not accepted, so he went to the hermitage of Fonte Colombo[1] and began again. Having finished it, he then gave it to Br Elias his vicar, who somehow lost it.[2] So Saint Francis had to rewrite this Rule again. Finally the Rule of the Friars Minor was approved on the 29th of November 1223. Afterwards Saint Francis wanted to add something to it: “…the minister general of the order, the Holy Spirit, rests equally upon the poor and the simple.”[3] But it was approved and nothing could be added to it.

Saint Dominic on the other hand did not yet have a rule of life so it was decided that he would take the Rule of St Augustine. He then began to adapt this Rule with a Constitution. The first part of the Dominican Constitution was formulated in their formative Chapter of 1216. It is said that they used the Premonstratensian Constitutions and in then in the Chapter of 1220, Saint Dominic himself [4] was the principal legislator, who adapted it further to suit the needs of the Order of Preachers.

The meeting of Saint Dominic and St Francis in Rome at the Lateran Council is the stuff of legend, yet the fact that they met is authenticated by Thomas of Celano: “Those two bright lights of the world, St Dominic and Saint Francis, were together in Rome once with the Lord of Ostia, who later became the supreme Pontiff.” [5] “As they left, the blessed Dominic asked Saint Francis to kindly give him the cord he wore about his waist. Saint Francis tried to refuse it out of humility, but Saint Dominic’s loving persistence prevailed and so Saint Francis gave it to him and he devotedly put the cord that was given him about himself beneath his inner tunic.”[6]

A further legend tells that sometime after this Saint Francis and Saint Dominic assisted at a service in St John Lateran Basilica, where a famous Carmelite preacher Saint Angelo was giving a sermon. As he preached Angelo saw Francis and Dominic in the church and moved by grace, he stopped, looked strangely at them and then announced with prophetic words that the two of them would be strong columns of the Church. At the end of the ceremony, St Angelo waited for them. The two founders, enlightened by supernatural grace, revealed the principal events of the life of St Angelo to him. As the three of them left the church, they came upon a leper begging there. The three of them gave a simultaneous blessing to the poor man, which restored him to good health.  [7]

Pope Innocent III died on the 16th of July 1216 in Perugia. While his body lay in state in the Cathedral of Perugia it was robbed of all the precious vestments intended for his burial. When Bishop Jacques de Vitry entered the Cathedral the next morning he found the body almost naked and half out of the coffin. He was reminded of the words of Pope Innocent III, “How brief and how vain is the treacherous glory of this world.” Pope Innocent III was first buried in Perugia. There is a story that he appeared to Saint Lutgarda[8] in Belgium asking her for prayers. Almost 700 years later in 1891 Pope Leo XIII had his body transferred to the Lateran Basilica in Rome.

By 1221, Saint Francis had clarified his vision for the lay people who wished to follow him and consulting with Cardinal Hugolino they wrote a Rule of Life for these people like Lady Jacopa, who wished to remain in the world, and still follow a Franciscan way of life. Saint Francis called this group of lay people the “Order of Brothers and Sisters of Penance.” After the Poor Clares, who are the Second Order, they became known as the Third Order founded by Saint Francis. Today it is known as the “Secular Franciscan Order.”

In earlier times lay people were affiliated to the great monastic orders in some ways as benefactors and founders or more closely as Oblates. The 12th century was an age of enthusiasm; there is little doubt that in some ways it carried the seeds of the historical Renaissance of the 14th and 15th centuries. The various city states, working guilds and a merchant class came into being in the 12th century. With the Church dominant in everyday life, it became an age of mysticism with even lay people seeking a deeper spirituality. This is seen in the advent of groups like the Humiliati[9] and the Waldensians.[10] The Trinitarian Order, approved on the 17th of December 1198 by Pope Innocent III,[11] was one of the first Orders to have what could be called a Third Order. However the Third Order of Saint Francis of Assisi was the first to have a Rule of Life. The Dominican third Order did not receive a Rule of life until 1285. The Carmelite Third Order was not finally established until 1476 although there is evidence to say that it began as early as 1273.The official Rule of Life for the Trinitarian Third Order was not promulgated until 1584.

The Papal approval of the Rule of the Brothers and Sisters of Penance in 1221 would have been a great joy for Lady Jacoba because it would have given the way of life she was trying to live the approbation of the Church. There is no doubt that Cardinal Ugolino in writing this Rule of Life for lay people and asking for its approval was aware of the spiritual relationship between Saint Francis and Lady Jacoba dei Settesoli, because she was such a prominent figure in Rome for her life of prayer and devotion and her great works of charity. The Secular Franciscan Order grew very quickly after it was officially approved.

[2] Legenda Major 4:11. St Bonaventure tells us that Br Elias “accidently mislaid it”, but the Legend of Perugia 113 as we find it in the Omnibus of Sources, gives us a far more interesting look at what happened and says that Br Elias and some Ministers were against this “new rule”. .

[3] 2 Celano 193 “…and the minister general of the order, the Holy Spirit, rests equally upon the poor and the simple.” (all the friars).

[4] St Dominic died at the age of fifty-one on the 6th of August 1221. It is said that before he died he made his friars lay him on some sacking on the ground and that “the brief time that remained to him was spent in exhorting his followers to havecharity, to guard their humility, and to make their treasure out of poverty”.

[6] There is nothing said about St Dominic giving the Rosary to St Francis. In fact the Franciscans developed their own Rosary called “The Franciscan Crown” from the piety of Venerable Br James of the Rosary (Cir.,1422 -1492 The Franciscan Book of Saints p. 774. Feast Day October 16.

[7] The linking of these three saints is very interesting. St Angelo was born in 1185 and as a Carmelite came to Rome in 1218 to obtain approval of a new Carmelite Rule from Pope Honourius III. As such he would have come under the responsibility of Cardinal Hugolino as did St Francis and St Dominic. St Angelo was born into a Jewish family living in Jerusalem, that converted to Christianity. He was martyred in 1225 in Sicily.

[8] The Benedictine, St Lutgarda (1182 – 1246) was a Flemish saint. On the advice of her friend Saint Christina the Astonishing, she became a Cistercian Nun. She experienced many ecstasies, levitated and dripped blood from her head when entranced. Lutgarda was one of the great precursors of devotion to the Sacred Heart. She was a friend and mother to the early Franciscans and Dominicans who called her the “Mother of Preachers.” Saint Christina was truly astonishing and about as weird as you can get for a mystic, but Bishop Jacques de Vitry was a witness to her miraculous and very strange behaviour. https://en.wikipedia.org/wiki/Christina_the_Astonishing

[9] The Humiliati began as a Lay movement, much like the Neocatecumimate and other Evangelical groups today. They were founded by lay people. Then they formed a 2nd Order of women and finally a 3rd Order of Priests. Once they had done that the priests took precedence and became the First Order. Their initial habit was an ashen grey.

[10] The Waldensians were a lay group founded by a merchant called Peter Waldo who lived in Lyons. He gave all his property to them in 1173. They called themselves the Poor men of Lyons. They were one of the first groups to translate the Bible into the vernacular. Although condemned in 1215 they were declared heretics and were persecuted for centuries they still exist today. In 1215 Pope Francis visited their temple in Turin apologised for their persecution and asked forgiveness on behalf of the Catholic Church. Today they consider themselves to be Protestant.