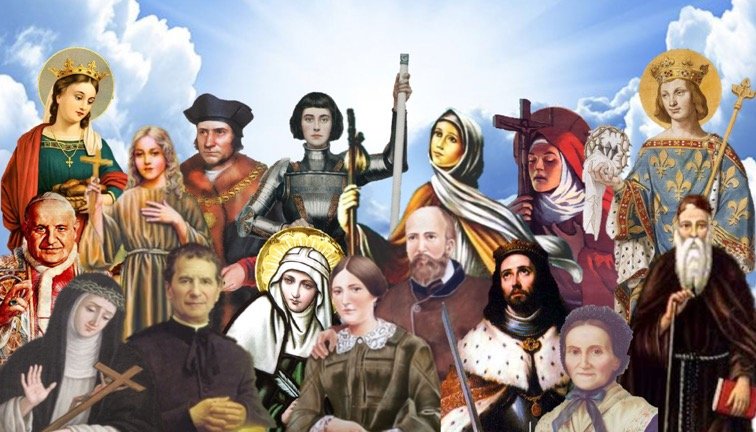 Many men asked to join St Francis in his way of Gospel life and he founded his first Order called The Order of Friars Minor in 1209.

Then in 1212 St Clare decided to follow him and he found her the convent of San Damiano near Assisi, which many ladies joined. This second Order founded by St Francis was called The Poor Ladies. After the death of St Clare they were called The Poor Clares.

Then a group of lay people, like Luchesio Modestini and his wife, also asked St Francis to write a Rule of Life for them. Exactly when he began to think about a third way of living a Gospel life as a Secular Franciscan Order, is difficult to determine, but he could have been thinking about this before 1215 when he met and gave spiritual direction to Lady Jacoba dei Settesoli, may have written the first edition of his Letter to all the Faithful.

The friend and protector of St Francis and the friars, Cardinal Hugolino, who later was elected to the See of Peter as Pope Gregory IX, wrote the first official “Rule of Life” for the Secular Franciscan Order in 1221.

Wherever St Francis sent his friars the people wanted to share in their life and spirituality. Such was the demand among women to follow the way of life of the Poor Ladies, that St Francis sent St Clare’s own sister, St Agnes of Assisi, to establish other convents of the Poor Ladies in Northern Italy. Another Agnes, St Agnes of Prague also founded a convent of poor ladies in her own country of Bohemia now called the Czech Republic. She was an extraordinary woman of great beauty, who had been asked to marry the Holy Roman Emperor, but rather than the glamour of this world she chose to become a follower of St Clare and a bride of Christ.

In the courts, castles, cities, towns and villages lay people were inspired by the vision of St Francis. Since most of them could not join the friars or sisters, because they were married or had other binding commitments they asked to join the Secular Franciscans.

Some other famous people who were Secular Franciscans were:

As part of the Franciscan Family, Secular Franciscans live in the world and strive in the spirit of St Francis to assist people to realise we are all brothers and sisters.

They believe that God, in love, created everything intrinsically good, and that human life created by God, in his own image, is sacred from beginning to end.

They are well aware that the human person has been damaged by sin, but they are dedicated, in compassion, to assist their brothers and sisters in every way possible. To this end over the centuries they have built Churches, Schools, Hospitals and assisted in the missionary efforts of the friars and the Church all over the world.

The spirituality of the Secular Franciscans is a spirituality of seraphic love for the Crucified Christ. This finds its focus in the celebration of the Sacrifice of the Mass – the Eucharist – through which we offer, in the power of the Holy Spirit, the world with all its joyful, luminous, sorrowful and glorious mysteries to God the Father, creator of all.

Like the friars and the sisters, the seculars are part of a worldwide family that takes seriously St Francis’ vision of universal fraternity, that includes a genuine care for all God’s creatures and the environment in which they live.

This spirituality of relationship goes far beyond a simple devotion to St Francis; it has to do with following the Gospel way of St Francis as he followed in the footprints of the poor Christ and his blessed Mother.

The Secular Franciscan Order is not simply a spiritual association or devotional group. It is a way of life highly regarded and approved by the Church. It is a Gospel way of life sealed by God in the canonization of its many saints, blessed and holy people.

IS GOD CALLING YOU INTO A DEEPER SPIRITUAL COMMITMENT AND RELATIONSHIP WITH HIM?