Francis And The Sultan – Part Three 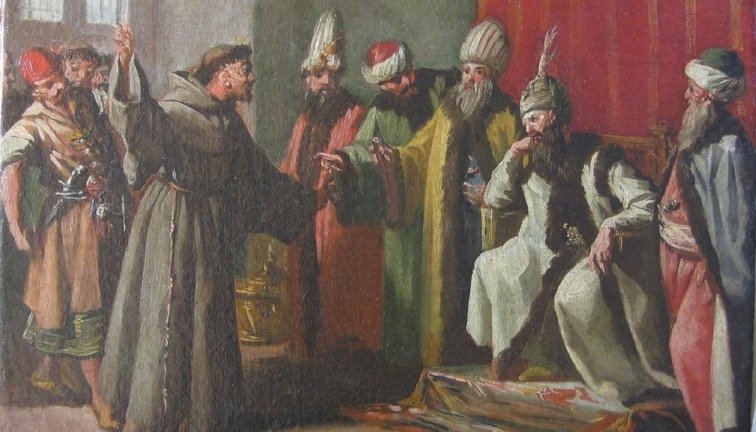 There are some interesting events which refer back to the meeting of Francis with the Sultan. Here are some that show how much the meeting is remembered by both Christians and Muslims today.

The Chronicle of Enoul is a 12th century description written by one of the Crusaders, who described the event in 1219.

“Having said this, the Sultan’s court took their leave and departed, without wanting to hear another word. There remained only the Sultan and the two clerics (two friars: Francis and Illuminato) . Then the Sultan said to them: ‘My lords, they have told me that in the name of God and of the law that I should have your heads chopped off, because it is so prescribed. But I am going to act against the law, because I am never going to condemn you to death. For that would be an evil reward for me to bestow on you, who conscientiously risked death in order to save my soul for God.’ After sayingthis, the Sultan said that he wished they would remain with him, and that he would give them vast lands and many possessions. But they replied that they did not want to stay – because from that moment they saw he did not want to listen to them or understand their message – and that they would like to return to the Christian camp, if he would permit them.

The Sultan replied that he would gladly have them escorted safe and sound to the Christian camp. Furthermore, he brought great quantities of gold, silver, silk garments and other precious goods and invited them to take whatever they wanted. They said that they would not have taken anything once they saw they could not obtain his soul for the Lord God, for they considered this the most precious thing they could give to God, rather than the possession of a vast treasure. They said it would be sufficient if he would give them something to remember him and to eat with them, and then they would be on their way, since they could not accomplish anything else there. The Sultan gave them plenty of food to eat, whereupon they took their leave of him and he had them safely escorted back to the Christian camp.”

Francis’ quest to convert the Muslim “Saracens” in the Holy Land, or be martyred trying, is represented by a silver-and-ivory horn given to him in 1219 by the sultan of Egypt, Malek al- Kâmil. In what turned out to be a futile gesture, the horn was ceremoniously shown to Tariq Aziz, Iraq’s deputy prime minister and a Chaldean Christian, as an icon of peace by the Franciscan leadership in February, 2003 when Tariq Aziz made a high profile visit to Assisi during the countdown to the Iraq war. The visit turned out to be controversial. He was invited by the Assisi friars to pray at the tomb of Saint Francis in order to show that ‘every possible avenue towards peace should remain open’, a spokesman for the Franciscans said.

But a number of Italian politicians and Iraqi exiles complained that the friars were being used by a man who since 1979 has been at the heart of one of the world’s most appalling regimes. They pointed out that Aziz, who was baptized Michael Yohanna near Mosul in northern Iraq, but later changed his name to make himself acceptable to the Muslim majority, was a Christian in name only. As a loyal member of Saddam Hussein’s Baath party, he was a pan-Arab socialist and atheist, Iraqi opposition leaders said.

In the basilica of St Mary of the Angels, Aziz listened as an American Franciscan read in English the famous “Peace Prayer” attributed to St Francis: “Lord, make me an instrument of your peace…” He was later handed a ‘lamp of peace’ by Bishop Sergio Goretti of Assisi, who prayed that the money spent on weapons could instead be used to reduce poverty in the world. The lamp was the same one lit by the world’s religious leaders gathered to pray for peace in Assisi in January 2002. Then Aziz and the Franciscan custodian of the basilica, Fr Vincenzo Coli, together touched the ivory horn given to St Francis by the Malek al- Kâmil.

Because of Francis’ meeting with the Sultan, he is often declared a model of interreligious dialogue. He is a model of one who stands for non-violence, non-belligerence and honesty. But Francis is also a genuine contemplative willing to dialogue with anyone. He also treated everyone as if he was his own brother.

PrevPreviousFrancis And The Sultan – Part Two
NextWho is promoting the Secular Franciscan Way of Life now?Next