Francis And The Sultan – Part Two 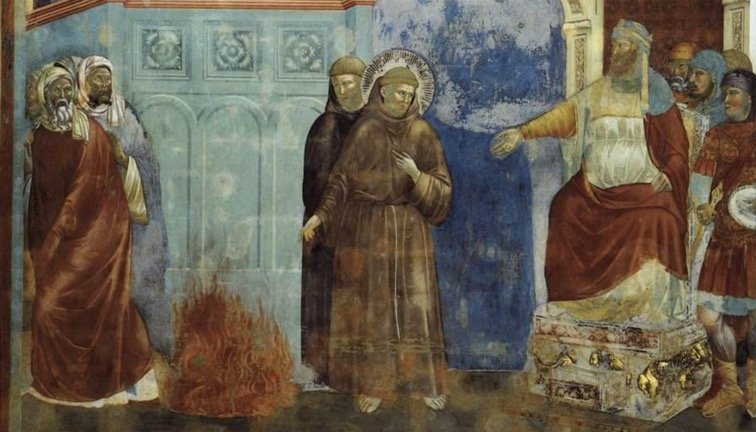 Thomas of Celano describes the meeting between the Sultan Malek al- Kâmil and St Francis:

Before he reached the Sultan, he was captured by soldiers, insulted and beaten, but he was not afraid. He did not flinch at threats of torture nor was he shaken by threats of death. Though he was ill-treated by many with a hostile spirit and a harsh attitude, he was received very graciously by the Sultan. The Sultan honoured him as much as he could and offered him many gifts trying to turn his mind to worldly riches. When he saw that he scorned these things, the Sultan was overflowing with admiration and recognized him as a man unlike any other. He was moved by his words and listened to him very willingly.”(1Cel XX 57ff)

That is a striking account from Brother Thomas as he and his contemporaries could never have imagined a peaceful meeting between a Christian religious founder like Francis and a person identified as the chief enemy of the Cross of Christ. What Francis was prepared for was the possibility of persecution, even martyrdom, but what he wanted most was the conversion of the Sultan. Indeed the key to his fearlessness was genuine love, not just of God, but of this Wolf of Gubbio, before him. What happened, in fact, at Damietta is one of the most puzzling events of the warfare between Christians and Muslims in the Middle Ages. Here there was a peaceful encounter between two men, both deeply religious, who had a conversation about God.

A Christian Bishop from France, Jaques de Vitry, was present at the time Francis crossed the desert to join the Sultan. He tells us in a letter of 1220 to friends at home, that he saw the founder of this Order (Francis) who, for several days, preached the Word of God to the Saracens and made some progress. Jaques de Vitry writes: “The Sultan who was the ruler of Egypt privately asked Francis to pray to the Lord for him that he might be inspired by God to adhere to that religion which most pleased God.”

When Francis returned to the Crusaders, he brought with him a peace treaty from the Sultan and a promise to return the large relic of the true Cross that the Sultan’s uncle Saladin had captured from the Christians at the Battle of Hattin, but not heeding Francis’ advice, the Papal Legate Cardinal Pelaggio Galvani insisted on their attack at Damietta, and the Crusaders were soundly defeated. However, with this complete victory the Sultan Malek al- Kâmil did something quite baffling, he offered them peace and exchanged prisoners. It was a peace which lasted eight years, but he did not return the relic of the True Cross. Some historians say he did not have it, but this would have been completely out of character for such a man of integrity as the Sultan Malek al- Kâmil, to promise something he did not possess.

This caused Francis great sadness, but he decided to write down what is called the first Rule for missionary activity in the Catholic Church cf. The Early Rule, Chapter 16. In the context of the Crusader mentality of the time, this Rule stands out.

Francis talks about going among the Saracens with permission of one’s Minister, to live spiritually among Saracens and non-believers in two ways: Firstly, not engaging in arguments or disputes, but to be “subject to every human creature” for God’s sake (“Muslim” means “submissive”) and to acknowledge they are Christians; Secondly, to announce the Word of God when they see it pleases the Lord in order that non-believers may believe and be baptised. Thus, even today we have Franciscans who go to live in a pagan land to witness to Christian living even in a hostile environment.

Another result of Francis’ visit to the Sultan was that Francis learned a form of piety practised by the Muslims. He says in his letter to Rulers; “have a signal to call all Christians to public prayer; also in his Praises of God, Francis includes titles for God similar to Muslim prayers.

The meeting also had effects on the Sultan. Even after the defeat of the Christians at Damietta, he made a peace offer to Christians even to take charge of Jerusalem, but his offer was rejected. In 1239, the Sultan agreed with a ten-year treaty of peace and that Franciscans were to take care of the holy places in the Holy Land – which they do until now. But there is still a custom in Jerusalem where every day, the Friars hand over the key of the Church of the Holy Sepulchre to a Muslim family to hold overnight, then take it back the next morning. The doors are locked and the Key is passed through a very small door in the main doors of the Holy Sepulchure.

Some ask the question: Why did Francis go to Egypt? Many say because he desired martyrdom just as the early friar martyrs in Morocco. But there is another explanation. Francis studied the words of Christ in the Gospels. Some say he learnt them all off by heart. One command stands out “Love your enemy”. At the time, the head of the Muslim army was the Sultan Malek al- Kâmil, the “enemy of the cross”, so Francis went to Egypt to make peace with the “enemy”. This was a self- sacrificing act of love by Francis just as Jesus called Judas “friend” when he came to betray him in the Garden of Gethsemane.