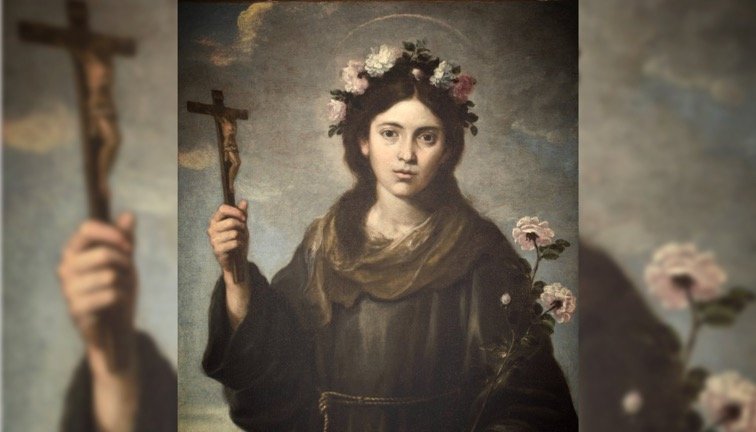 Saint Rose of Viterbo
Adapted from the Franciscan Book of Saints; Marion A. Habig OFM

Almighty God did marvellous things in the soul of Saint Rose. It appears that her parents gave her that name by divine inspiration, for it was symbolic of her entire career. As long as she lived, she bloomed like a sweet-scented rose in the garden of the Church, and in full bloom was she transplanted to Paradise. Before she was able to speak, Rose attempted to pronounce the sweet names of Jesus and Mary; and as soon as she had learned to walk, she asked to be taken to church and to other retired and quiet places to pray. When religious sermons were given, she would listen with the greatest attention.

When Rose was only three years old, God showed how pleased He was with her in the most wonderful way. One of her maternal aunts died. The family were standing around the coffin weeping aloud. Deeply moved by the sorrow of her relatives, little Rose went to the coffin, raised her eyes to heaven, and prayed silently. Then she placed her little hand on the body of her deceased aunt and called her by name. The dead woman immediately opened her eyes and reached out to embrace her little niece who had raised her to life again.

The child had a great compassion for the poor; she always tried to save some of her food to give it to the poor. One day when she left the house with some bread in her apron, she met her father, who asked her in an abrupt manner what she was carrying off now. The frightened child opened her apron and fragrant roses were found in it.

When she was seven years old, Rose retired to a little cell in her father’s house. There she spent almost all her time in contemplation and in practising rigorous penance. She prayed much for the conversion of sinners. Meanwhile our dear Lord was preparing her for an extraordinary mission.

Rose was not yet 10 years old when the Blessed Mother of God instructed her to join the Third Order of Saint Francis. Shortly after, our Lord appeared to her on the Cross, wearing the Crown of Thorns on His head and bleeding profusely from all His wounds. Rose, aghast at the site, called out: “O my Lord, who has reduced Thee to this state?” Our Lord replied: “My love, my deep love for men has done this.” “But,” asked Rose, “who has so pierced and torn Thee?” “the sins of men have done it,” was our Lord’s answer. “Sin, sin!” Cried the saint, and she scourged herself to make atonement for the sins of the world.

By divine inspiration, Rose then took a cross in her hand and went up and down the streets and public squares of her city telling the people of the terrible tortures our Lord suffered, and of the appalling wickedness of sin. Every now and then she would emerge from her solitude to urge the people to do penance.

The town of Viterbo, which belonged to the Papal States, had revolted against the authority of the Pope. Disregard for religion and moral degradation was the order of the day. But the sermons of this little missionary had marvellous results. The people came in crowds to hear her. The stone on which she stood was seen to rise in the air, and she was sustained there by a miracle while burning words issued from her lips. The greater part of the citizens had already resolved to do penance and to return to the legitimate papal allegiance when Rose and her parents were expelled by the civil authorities.

At Vitorchiano, her preaching had the same blessed results. In this place, a sorceress had done much harm among the inhabitants. Fearing that after her departure this woman would undo the good work she had achieved there, Rose was desirous of her conversion. Her initial efforts failed. Then our Saint had an immense pile of wood prepared in the public square; fire was set to it, and Rose stepped into the fire and mounted to the top of the pile. She remained untouched for three hours in the midst of the flames, singing the praises of God. The sorceress now cast herself at Roses feet and was sincerely converted.

Meanwhile the rightful authority of the Pope had been re-established in Viterbo, and Rose could return. She was now 15 years old and anxious to enter the convent of the Poor Clares. As she had no dowry, she could not be admitted. “Well,” said Rose, “you will not receive me while I am alive, but you will receive me after I am dead.”

She died two years later. Two and a half years after her death she appeared three times to Pope Alexander IV, who was in Viterbo at the time, and told him to have her body removed to the convent of the Poor Clares. When this was done, her body was found incorrupt; and it has remained in that condition to this day. Miracles are constantly occurring at her tomb. Pope Callistus canonised her in 1457.

Saint Rose of Viterbo pray for us.