Together, as the Family of Francis… 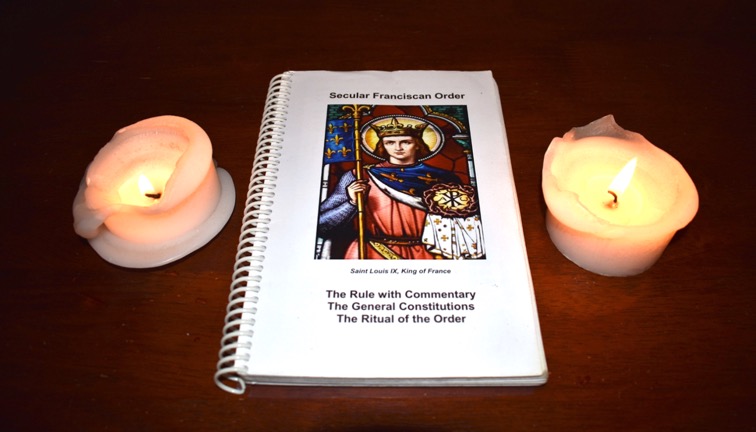 1. Together
2. as the Family of Francis,
3. may we give witness to the gospel,
4. be instruments of peace,
5. and build a more fraternal and evangelical world.

As you are well aware the new Rule was published in 1978.[1] Six years later we were given a new Ritual.[2]Like a pair of glasses, we need to put on this Ritual and see how it reflects the Rule that we were given forty years ago. The Ritual is not something we can make up on our own,[3] although if you look carefully, it is more flexible than you may at first think.[4] We turn to the Ritual when it is the time to promise to live the Rule of the Secular Franciscan Order. It is also with its words that we make our commitment to be responsible and of service to our Fraternity, and hold ourself in our own hands.[5]

As the New Year begins then, I want to reflect on the words from the Ritual that were on the Christmas Card/Email from Lola Kelly, the National Minister, which is set out above as five points upon which we can reflect. In these words, there is a whole pattern or plan of action for our lives. It comes just after the creed recited by the newly elected fraternity Minister on behalf of the new fraternity Council.

In this moment, using the words of the Ritual, all the newly elected Council members give witness together to their Franciscan calling and to their readiness to be of service to their fraternity. It is with these words that they take responsibility for the running of the fraternity; for  Promoting the Secular Franciscan way of life; for the Formation of those who respond to the invitation to live our gospel way of life. The words are very inspiring. They contain a very clear Franciscan vision of a better world to come:

We, the Council members of the …………… Fraternity, accept this responsibility[6] and service of leadership.[7] Before Almighty God, we promise to live daily the gospel life in the spirit of our seraphic father St. Francis and to exercise our new ministry to the best of our ability. We ask the guidance of the Holy Spirit and the cooperation[8] of this fraternity so that together as the Family of Francis we may witness to the gospel, may be instruments of peace, and may build a more fraternal and evangelical world, so that the Kingdom of God may be brought about more effectively.

The words: “together as the Family of Francis” are a very powerful statement, and comes at the very beginning of the Rule:

The Franciscan family, as one among many spiritual families raised by the Holy Spirit in the Church,[9] unites all members of the people of God – laity, religious and priests – who recognise that they are called to follow Christ in the footsteps of Saint Francis of Assisi.[10]

The Secular Franciscan Order holds a special place in this family circle.[11]

Legally, according to Canon Law, the Secular Franciscan Order is still bound to the different branches of the First Order and Third Order Regular, but regarding its management and leadership, it is now a united order of the laity – the biggest in the Church.[13]

The saying of St Pope John Paul II is important here: “As the family goes, so goes the nation, and so goes the whole world in which we live.” The very idea of “family” expressed in the Dogmatic Constitution on the Church, calls for a spirituality to be developed among the laity in the Church. It is not surprising therefore to find this also in the Secular Franciscan Order being called to see itself as part of a family[14] and to espouse family virtues for a more stable and compassionate world. Pope Francis at the World Meeting of Families, in his own practical down to earth way, noted three simple phrases that are key to a happy family life. They are:

[3] The Ritual, as with the Rule and Constitutions has to be approved by the Vatican, and once it is approved it becomes set and unchangeable, unless a new Edition is presented to the Holy See and approved. Let me give you an example of an illegal addition. In our Trilogy booklet containing the Rule, Constitutions and Ritual, we tampered with the Ritual by adding without permission, the Gospel passage from St John about the washing of the feet at the Last Supper, we did not do it just to be revolutionary, but rather to emphasise the “servant” nature of Christian and Franciscan “leadership.” The only explanation as to why it was not added in the first place to the Ritual seems to be that an emphasis on “servant leadership” was not highlighted in 1984, but became important in the years that followed. It is odd that the “washing of the feet” is not mentioned in the other Gospels. It is only in St John’s gospel.

[4] The Ritual constantly uses the following instruction: “in these or similar words:”

[5] St Thomas More, Third Order of St Francis: “When a man takes an oath, he’s holding his own self in his own hands.” This quote is taken from the script of the play and later the Movie “Man for All Seasons, 140”

[6] The word “responsible” first turns up in our documentation in No 25 of the Commentary on the Rule: “…members are responsible for taking care of their own in whatever way is necessary.”The Rule itself, No 25., speaks about financial support for the fraternity, and the footnote indicates that this sense of stewardship has been part of the Secular Franciscan Rule from the very beginning. The Order of Penance was if nothing else very practical about finance.

[7] The phrase “service of leadership” occurrs only once in the Rule, Constitutions and Ritual and it is here in the Ritual. It seems to be a new concept, but it goes back to Pope Innocent III who styled himself “Servant of the servants of God” and originated with St Pope Gregory, the Great + 604 AD, who was well aware that responsibility and authority can become beligerant, when patience and compassion are exhausted and a militant approach seems to be the only way things get done.

[8] Unfortunatley the word “cooperation” occurs only 2 times in the whole of the Trilogy. It suggests that hopefully everyone in the fraternity will assist these leaders in their work of building up the fraternity, which is the core and heart of the Secular Franciscan Order. The word “cooperation” is the best word for understanding the Theology of Grace. We are called to co-operate with the Holy Spirit acting in our lives. Americans do not use a hypen so it looks like cooper-ation, which I personally appreciate – for some obscure reason.

[12] The OFS now has its own Postulator for the Cause of Saints. Before this it was done by the first order for them.

[13] Of course this is a little simplistic, because there are, unmarried people in the OFS and also secular priests and bishops. As well as these there have been some Secular Franciscan hermits: St Conrrado of Piacenza, T.O.S.F. stands out in particular. He should be invoked if you ever get caught in a bushfire. He also was able to give a loaf of fresh bread to everyone who visited him during a famine, even though he lived in a cave.