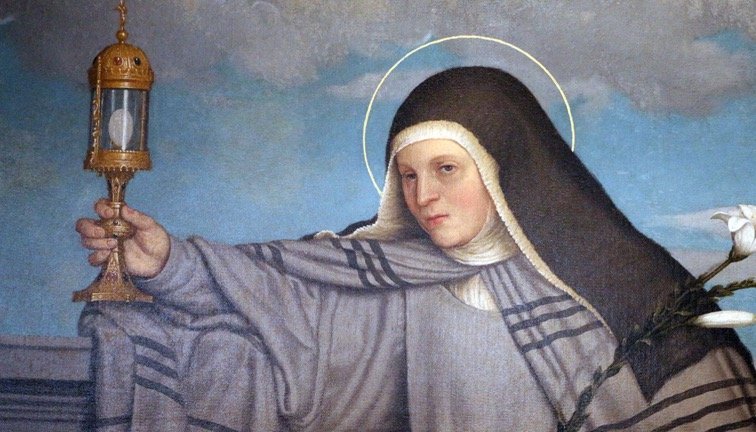 On Palm Sunday the 18th of March 1212, during the morning Mass in the Cathedral of San Ruffino, Bishop Guido, in a special gesture, gave Clare a palm branch.[1] That night Clare left her home[2] with lighted torches to go to the Portiuncola where the friars waited for her. After prayers, Francis cut her hair as a sign of consecration and gave her a veil for her head. Clare was then accompanied by the friars to the monastery of San Paolo delle Abbadesse. It was the most important Benedictine monastery in the diocese of Assisi. Clare had no dowry because she had given all her inheritance, everything she owned to the poor. She simply asked for sanctuary and to be accepted as a servant. It was a temporary place to stay. Clare was not looking to live the secure community life of the Benedictines, but the Gospel way of life of Christ and the Apostles.

The reaction of the men in her family to this dramatic leaving the family was one of shock and anger. They went to the monastery and demanded that Clare return home with them. Clare refused. She had chosen Christ, and clinging to the altar, a sign of sanctuary, she removed her veil and displayed her shaven head, a sign of her consecration. The men of the family could do nothing in this holy place to take her by force, and so they had to leave in confusion.

Shortly after this, Clare left S. Paolo delle Abbadesse and went to live with a group of religious women at S. Angelo in Panzo.[3] This community of religious women lived a life of penance on the slopes of Mount Subasio. They did not have an officially recognised rule and lived on the work of their own hands and the alms of those passing by. It was not the security of a monastic community, and it was closer to what Clare envisioned as her way of Gospel life.[4]

The family drama increased when Clare’s sister Caterina arrived to join Clare after also having abandoned the family home. Clare welcomed her with great joy because she now had a companion on her new journey.[5] This time the reaction of the men in the Offreduccio family was even more violent. Twelve armed men led by Uncle Monaldo came to capture Caterina and take her back home. They went so far as to seize her and to carry her off violently away from Clare, who immediately turned to the Lord in prayer to save her sister.  The men had managed to carry Caterina quite far away when, through the intercession of Clare’s prayers, Caterina’s body became so heavy that all the men together, could no longer lift her off the ground.

Seeing this Uncle Monaldo, the head of the family, became enraged and drew his sword. Raising it above his head he intended to strike her dead on the spot. Suddenly a severe pain shot through his upraised arm so that he cried out and had to drop his sword as his arm fell useless to his side.[6] This caused such a shock to all the men that they simply left Caterina where she lay and in great consternation turned to take care of Monaldo having to carry him back to Assisi. Caterina left there all alone made her way back to Clare. Caterina later received the tonsure from Francis, who also changed her name to Agnes – after the martyr of Rome.[7]

Francis, while previously rebuilding the Chapel of San Damiano, in a spirit of prophecy, climbed the church wall and called out in French for help in restoring the chapel because holy ladies would come to live at San Damiano in the future.[8] So, ultimately Francis brought Clare to live in the little convent attached to San Damiano. It was here at the beginning of his conversion that Christ from the Cross had said to him, “Francis, go repair my Church which as you see is falling into ruins.” So, it was here that he brought Clare and her little community to live from this time forward gathered around this large, beautiful Cross,[9] that gave Franciscans their mission in the world.

It must have been evident for the women in Clare’s family still living in the family palace in Assisi that the light of their lives had gone out when Lady Clare left home. Caterina was the first to respond to the loss of Clare. Clare’s mother Ortolana, her husband having died when Clare was still a little girl and after her daughter Caterina also left home realised that life in the world meant nothing to her anymore and she also went to joined Clare and Agnes. The youngest daughter Beatrice after divesting herself of the family fortune also joined Clare. Their nieces Balvina, Agnese, and Amata would also join the “Ladies of San Damiano.” The light of the Gospel rekindled by Francis and Clare began to burn more brightly for the Church.

The Convent of San Damiano was just outside the city walls of Assisi. It had no land or money for a secure income, nothing to indicate how it would survive. Still, the people of Assisi were caught up in the drama of its foundation and remembering the kindness of these women in caring for the poor of their city, they saw it as their little convent of sisters just a short walk down the hill.

Having settled into San Damiano Clare now began the task of working out what Francis’ ideal of Gospel life meant to her and her sisters in their day-to-day living. She identified very early on: 1. The Gospel life is one of intense focus on Christ. 2. This focus on Christ is secured by the vow of holy poverty that allows no other possession, no other security except Christ.[10] 3. This way of life is made possible by working with their own hands and by having recourse to the table of the Lord – begging if necessary.

[1] There is a German image from c.1360, now in the Cloisters Museum, NYC that has St Francis with the Bishop giving a palm to St Clare. See: https://www.flickr.com/photos/paullew/25299415494 In iconography the palm branch is a symbol of victory over the flesh – martyrdom.

[2] Clare did not leave her home by the front door; it was not as simple as that. These houses had a smaller doorway beside the main door called “the door of the dead” through which a coffin left the house. Clare had this broken down and used this door to leave the house. It was a declaration to her family that she had died to the life she lived up until this time. It was a very dramatic and definitive gesture.

[3] We do not know the reason for this move. Perhaps the Benedictine Nuns did not want to be involved in the scandal that was now being talked about in Assisi, but more likely Clare did not see herself as living a Benedictine way of religious life with its wealth and independent security. Certainly, the way of life of the community of religious women on Mount Subasio was closer to what Clare had in mind as she searched for her Gospel way of life.

[4] They may have been Beguines a lay Religious Order of women who lived together, without vows or a group of Humiliate who were very similar in their way of life. There were so many new groups rising up in the 12th Century that it has been called “The Age of enthusiasm.”

[6] There is every indication that he was in such a violent fury that he had a stroke.

[7] St Agnes of Rome was martyred by a sword when she was only 12 or 13 years old. If Caterina was born in 1198 then she would have been only about 14 in 1212 when this happened. The name change is not just a coincidence or a tradition.

[8] Testament of St Clare 10-17. Legend Also 2 Celano 13, tells us St Francis was so enthusiastically carried away in spirit that he prophesied in French about the Ladies who would live at San Damiano.

[9] After the death of Clare, the sisters moved from San Damiano to a new Convent attached to the Basilica of St Clare which took the place of the Church of St George. In 1257 they took with them the San Damiano Cross. There they kept it hidden for almost 800 years, until in about 1937 when it was restored and place on display.