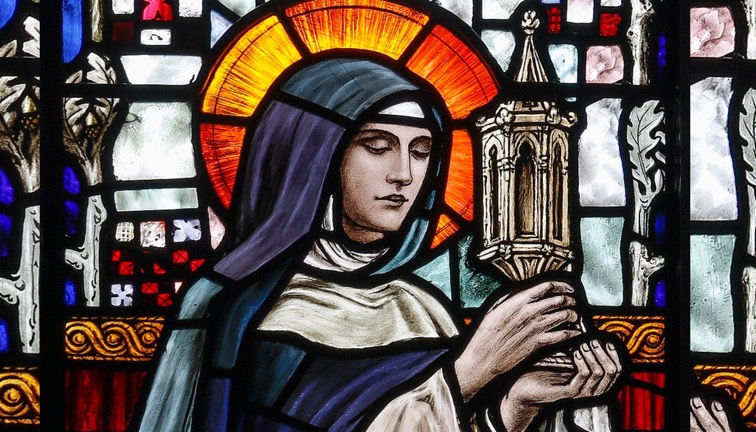 The Family of Clare.

The Offreduccio family claimed to trace their history back to Charlemagne.[3] They were one of about twenty noble families that lived in Assisi. Favorone, Clare’s father, as an armed knight, was often away from Assisi on the business of the family’s fealty.[4]

Clare’s mother, Ortolana, a name which means “the gardener” was also from a noble family, the Fiumi.[5] Lady Clare and her sisters Caterina[6] and Beatrice[7] were raised as children, most probably within a section of the family palace set aside exclusively for the privacy of the women. If this is true, it might explain why St Clare later accepted more readily the small strict enclosure of the San Damiano convent.

Shortly before the birth of her child Ortolana prayed to the Virgin Mary for a safe delivery and received a vision in which she was told, “Fear not, for you will safely give birth to a light which will shine on all the earth.” When her baby girl was born, Ortolana named the child “Chiara,” meaning clear, bright and shining.

Clare[12] Offreduccio Favorone was born in Assisi on the 16th of July[13] 1184, about eleven or twelve years after Francis. She was baptised in the same font[14] in the Cathedral of San Ruffino as Francis. As a young girl, Clare and her sisters Caterina and Beatrice[15] were given a good education. From her letters, we know that St Clare wrote better Latin than St Francis. So, we may assume that she was well able to read Sacred Scripture, the Lives of the Saints, and other literature available and popular at the time. In addition, noblewomen often passed the time doing needlework, and Clare continued to do this all her life. For this reason, she is also recognised as the foremost patron saint of needleworkers and embroidery.[16]

As a child, Clare learned how to be prayerful and responsible from her pious mother. Br Thomas of Celano tells us that “when she did not have a chaplet[17] with which to count the Our Father. She would count her prayers to the Lord with a pile of pebbles.”[18] Between Ortolana and her daughters, there was this precious familiarity of Ortolana, “the gardener,” referring to Clare and the other two girls as her “little plants.”[19] Living so close to the Cathedral added to their devotional life. Ortolana used to visit the poor people of Assisi and help them.[20] As a child, Clare would hide food from her plate at dinner to later have it sent through servants to the poor who came to the door of their home for assistance. Lady Ortolana and Lady Clare were very much respected in Assisi for their way of life, charity, and devotion.

The Politics of Assisi

The town of Assisi belonged at that time to Conrad of Urslingen, Count of Assisi.[21] He lived in the Rocca Castle above Assisi. Conrad was also Duke of Spoleto. In 1198 he had to hand over Spoleto to the Pope, and while he was away, the people of Assisi rebelled, partly tore down the Rocca Castle to strengthen the town walls, and declared Assisi a commune of the people. The uprising forced the nobility of Assisi, including Clare’s family, to leave the town and go and live in the city of Perugia in 1200. A war between Perugia and Assisi followed.

At the battle of Collestrada in 1202, Assisi was defeated, and many Knights who fought for Assisi were imprisoned in Perugia; among them was Francis Bernadone, the son of Pietro Bernadone, a wealthy merchant of Assisi. His father ransomed Francis after a year in prison. On his release, he fell ill and almost died. It was the beginning of his conversion.

During the next few years, the war became political rather than military. The Pope sided with Perugia and Emperor Otto IV sided with Assisi. By 1210 peace was restored, and the nobles of Assisi, including the family of St Clare, returned to the city.

It is said that Clare’s relatives wanted her to marry a nobleman, Ranieri di Bernardo, but she firmly refused; by then, she had wholly dedicated her life to Christ and proved this by works of charity. She was known for her practice of prayer, her virginity, and her sense of compassion for the miserable poor and sorely afflicted.

While living in the family home, Clare was searching for a way to live the Gospel more fully. She was already wearing simple coarse clothing beneath her finery, and she had a spiritual instinct that Francis had discovered the Gospel life, what later on she would call “the Way.”[22]

She wanted to know how she, too, could live this way of the Gospel. Her meetings with Francis Bernadone took place in the presence of a friend of Clare and Brother Filippo Longo, who came along with Francis.[23] They needed to be both accompanied. Clare was eighteen, Francis was twenty-nine. There is every indication that Clare and Francis were also speaking with Bishop Guido of Assisi.

[1] Medieval names are complicated. Clare’s name includes three generations of knights. Some sources suggest that her father was Favorone Sciffi, Count of Sasso-Rosso, who had a palace in Assisi and a castle on the slopes of Mont Subasio. Offreduccio seems more likely.

[2] There is every indication that there was another brother Scipione between Monaldo and Favorone.

[3] There was a tendency with the nobility of Italy to claim origins back to historically important people. If the Offreduccio were able to trace their family history back to Charlemagne that would give them a connection to France.

[4] As nobility Clare’s family would have owed fealty to Conrad of Urslingen, Count of Assisi and through him to the Emperor Henry VI. There is every reason to believe that Clare’s father died while she was very young leaving his family in the care of Uncle Monaldo.

[5] Ortolana later joined her daughter in San Damiano and became a Poor Lady. Ortolana is listed as Blessed Ortolana of Assisi.

[7] Blessed Beatrice of Assisi joined her mother and sisters at the convent of San Damiano.

[8] The distance from Assisi to Rome is 173.3 km. The pilgrimage would have included a group of nobles and their knights and retainers.

[9] Poor Clare and first Witness in the Process of Canonisation.

[10] From Rome the distance to the Shrine of St Michael on Mount Gargano is 405km. In medieval times knights went there on pilgrimage.

[11] Ortolana went on these pilgrimages with a friend Pacifica de Guelfuccio of Assisi who became one of the first companions of St Clare.

[12] Chiara is the Italian version of her name it is from the Latin meaning “bright” or “shining.” The Medieval English version was “Clara.”

[13] For some reason, perhaps a lack of devotion, we Franciscans do not celebrate her birthday which is the 16th of July either 1193 or 1194.

[14]  The Font: The Holy Roman Emperor Frederick II born on the 26th of December 1194 was also baptised in this same font. On the 1st of March 1838 Francesco Possenti later St Gabriel of Our Lady of Sorrows, who was a Passionist, was born in Assisi and baptised in this font.

[15] Blessed Beatrice was still alive when St Clare died and was the nineth witness in St Clare’s Process of Canonization.

[16] A references to her needle work involves the story of the cat that brought her the little towel that she wanted to embroider for use at the Altar.

[17] The Chaplet of the Our Fathers was the only prayer beads that the people used before Our Lady gave the Rosary to St Dominic in 1208.

[18] This beautiful detail of Clare’s prayer pebbles is only found in the Legend of St Clare written by Thomas of Celano.

[20] Testimony of the Frist Witness.

[21] After the conquest of Assisi by Christian of Mainz in 1174 the town was given to Conrad of Urslingen.

[23] Bona di Guelfuccio, tells us she was with Clare and Francis had with him Brother Filippo Longo. Thomas of Celano backs this up.