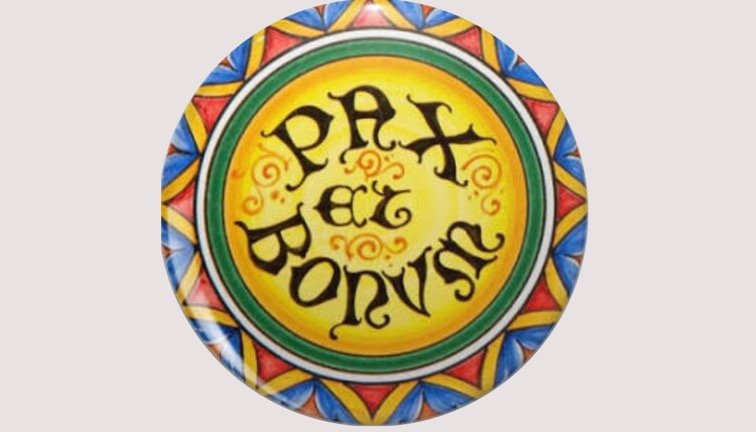 Irony, God’s sense of humour:
Ironically, after Saint Francis’ conversion, his very first follower, Sir Bernard of Quintavalle,[1] who had everything Francis had wanted in this world, realized that Francis had found something much better than secular fame and fortune. So, Bernard was willing to leave all his earthly glory behind to have a share in this joy Saint Francis had found – the gospel life.[2]

Gospel Fraternity:
“The Lord gave me brothers, and no one showed me what to do except the Lord.” Saint Francis’ second companion was an anonymous person from Assisi,[3] and then came the mystic Br Giles. A short time later, when there were twelve companions, Saint Francis set off for Rome to ask Pope Innocent III to confirm their evangelical way of life in “a few and simple words” that he had written down.

The Rule of 1209, only orally approved by the pope, began something new in the religious life of the church. The Franciscans were not a Monastic Order, they were not enclosed in a monastery with a cloister, and they were not a clerical Order as such because most of them were not priests, although Saint Francis himself was a deacon. It was something quite new in the church that did not fit very easily into the Canon Law of the Church. It is not something even today that fits easily into the Canon Law of the Church.

Mission to a Secular World:
The Rules of 1221 and 1223 both had something that no other religious order Rule possessed at that time. There was a chapter that allowed, even sent, after discernment, the friars out as missionaries. It was the first religious Rule that focused on evangelizing the secular life of the world – worldwide. So, you could say quite clearly that the mission of the first, second, and third Orders of Saint Francis was to be a leaven in the midst of the secular world. Somewhere between 1210 and 1215 Saint Francis wrote the “Exhortation of St Francis to the Brothers and Sisters of Penance” so they were in existence and by 1221 they had a Rule of Life. Even the Poor Clares relied, not on massive farming estates to survive, but on the people of the towns where they lived, and Saint Clare had to send her sister Agnes to establish other monasteries of Poor Ladies.

The rapid spread of the Franciscan family is due to the missionary activity of the friars. By the death of Saint Francis in 1226, the friars were in almost every European country. By 1234 Saint Agnes of Prague, refusing the hand in marriage of Emperor Frederick II had founded a Poor Clare convent in what is today the Czech Republic. The 27th of May 1235 saw Saint Elizabeth of Hungary canonized. Soon after Saint King Louis IX of France took the throne (1226-1270), Franciscan Missionaries had reached China. From 1245 until about 1370, over 242 Friars would be sent to China.[4]The Franciscans had established themselves as the foremost missionary Order in the church. They were perhaps only outdone later in missionary zeal by the Jesuits, but the Jesuits did not arrive until Saint Ignatius of Loyola (1491-1556).

The 19th Century:
However, in our search for why Saint Pope Paul VI called the Third Order of Saint Francis the “Secular Franciscan Order,” and why “Pax et Bonum” is a prophecy for a better world, a “Civilization of Love” we must jump to the 19thCentury.

Seven popes in a row[5] saw in Saint Francis of Assisi a fraternal man striving to give the church a vision of universal fraternity to bring about an era of peace and goodness. To this end Pope Leo XIII did something dramatic to the first order of Saint Francis. He united all of the reform groups of the Franciscan order together in what he called the “Order of Friars Minor” (OFM). However, he did not include the Capuchins and he left the Conventual Friars alone.[6]

He also gave the Franciscan laity a new and less rigorous rule inviting everyone far and wide including Secular Clergy to become members of the Third Order of Saint Francis. In giving the Third Order its new rule, he calls it the: “Rule of the secular Third order of St. Francis.”[7]  The popes after him followed his lead and put their hopes for a better future under the banner of St Francis of Assisi. But tragically world peace and the common good eluded them!

The 20th Century: World War I (1914 – 1918)
In the first half of the 20th Century, the world experienced two horrific world wars. The first, called “The Great War,” caused the death of an estimated 9 to 11 million military personnel, with the civilian death toll from about 6 to 13 million. About 2 million died from disease, and 6 million went missing. The exact number will never be known this side of heaven. However, before we look at the next lot of ragged statistics, we should note the first two and the last two lines of a poem by the Australian poet John Blight called: “Death of a Whale.”[8]

“When the mouse died, there was a sort of pity;
The tiny, delicate creature made for grief…
…Sorry, we are too, when a child dies;
But at the immolation of a race, who cries?”

The H1N1 Virus “The Spanish Flu)
The 1918 influenza pandemic of avian origin (bird flu) is estimated to have infected 500 million people, with the death toll reaching approximately 50 million people worldwide.

World War II (1939 – 1945)
The Statistics for World War II make “The Great War” ill-named, too soon! During the Second World War, an estimated 70 to 80 million died, the data including war-related disease and famine. Yet, in all these statistics, there are none for those wounded or maimed for life. Less said about psychological and spiritual deficits. Perhaps Stalin summed it up by saying: “A single death is a tragedy; a million deaths is a statistic.”[9]

(The search for Pax et Bonum – a Civilization of Love. to be continued…)

[1] Sir Bernard of Quintavalle was one of the wealthiest young nobles of Assisi. He had studied at the University of Bologna, the oldest University in the world still in existence founded in 1088. Bernard was no lightweight intellectual having received a doctorate in Civil and Ecclesiastical Law, (Canon Law). He was sent by a perspicacious St Francis to preach to the wealthy intellectuals in Bologna. At first Bernard was abused as a pauper because of his poor habit. However, after he was discovered to be a genuine religious, and was also recognized as a Doctor of Law he began to be very much respected. Once this happened, he asked St Francis to be sent somewhere else. He was then sent to Milan and later to Florence.

[2] Don’t ask me why the word “gospel” is not capitalized. It comes from an Old English word “gōdspel” meaning “good speak” or “good news.” We can blame St Anselm of Canterbury for using the word “gospel” to describe the testimonies of the Evangelists.

[3] Omnibus: I Celano 25 indicates an anonymous person from Assisi was second person to join. Footnote 84 says it was Peter Catani. Others say it is unlikely since Celano should have known the name Peter Catani. Peter had gone with St Francis to the Egypt and the Holy Land along with Br Illuminato. Peter became the Vicar of St Francis but died on March the 10th 1221 and was buried near the Portiuncula. His grave became a place of miracles until St Francis prayed there asking him to stop working miracles.

[4] Beginning on the 16th of April 1245 friar Giovanni da Pian del Carpine set out at the request of Pope Innocent IV from Lyon to go to China. He was 63 years of age. He arrived back in Europe in June 1247 with a letter for the Pope from the Great Khan. In his letter Güyük Khan, grandson of Genghis Khan,refused the Pope’s invitation to become Christian and demanded rather that the Pope and rulers of Europe should come to him and swear allegiance. So, from as early as 1245 until around 1370, Franciscan friars including Giovanni da Montecorvino who translated the Psalms and New Testament into the language of the Tartars, who were the rulers at the time. According to records during this period about 242 Friars Minor went to China, among whom there were 3 Archbishops and 11 Bishops. Genghis Khan had died on the 25th of August 1227, the year after St Francis.

[6] Later popes extended the name Order of Friars Minor to all three Orders adding Capuchin or Conventual at the end.

[7] The document “Misericors Dei Filius” (The merciful Son of God)

[9] It is possible that Josef Stalin was quoting Kurt Tucholsky from his “1932 essay on French humour. Line 13 down. “The death of one man: this is a catastrophe. Hundreds of thousands of deaths: that is a statistic!” https://de.wikisource.org/wiki/Franz%C3%B6sischer_Witz