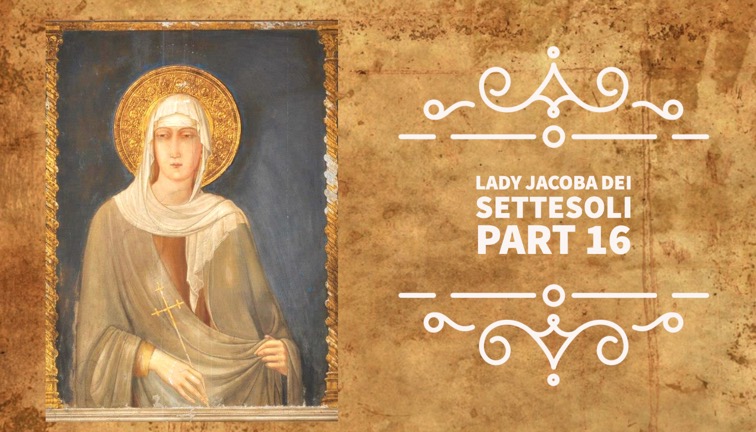 On her way to live in Assisi we are told that Lady Jacoba visited the friary at Greccio where Saint Francis made the first Christmas Crib. It is said that she gave the friars there the picture of the weeping Saint Francis she had paid an artist to paint for her while Saint Francis was either in Rome or Rieti. It shows Saint Francis with the Stigmata wiping the tears from his eyes with a fine almost transparent handkerchief that was typical of the time. Experts say the picture, as we have it today is most probably a copy of the original or a much later work. If it is a copy then this is perhaps the best portrait of Saint Francis that we have. It is free from the stylized conventions of the time. For comparison let us look at the famous picture of Cimabue.

The brilliant artist Cimabue (1240 – 1302) never met Saint Francis, but he was one of the first great Italian painters to break from the Italo-Byzantine style. In fact, when he came to paint the face of Saint Francis, he did something quite extraordinary. None of our faces are symmetrical (even on both sides) but Cimabue accentuates the asymmetrical face of his Saint Francis so that there is a look of simplicity to his portrait. It is pure genius! Saint Francis’ eyes are different sizes, his eyebrows different and so are his ears. There is a three dimensional aspect to his bent nose. An example of this trick is found in a more modern painting done in Assisi.[1] This modern artist has captured Cimabue’s style with one eye larger than the other and disproportionate ears. In contrast, the image of the weeping Francis accentuates only a face swollen from too much crying or from the scarring of the doctor’s medical treatment to restore Saint Francis’ eye sight by burning him with red hot irons.

Exactly where in Assisi Lady Jacoba lived for the next two years we do not know. We are told that in her last years she devoted herself to her life as a Tertiary, no doubt as Saint Francis advised with in a “spirit of prayer and devotion”. There is a fresco of her in the habit of a Tertiary with a cord around her waist carrying a plain woollen habit for Saint Francis, with an angel telling her to hurry to Assisi because the saint is dying, but it comes from a much later period, the last half of the sixteenth century.

The only other possible picture of Lady Jacoba is the one we earlier identified at the beginning of this story which has variously been designated as either Saint Clare, Saint Agnes of Prague or Saint Margaret of Cortona. The only reference in it to Lady Jacoba dei Settesoli is that this image has seven suns in her halo. But, are we clutching at straws?

In Assisi Lady Jacoba would have been at the centre of the Franciscan world with its focus on the building of the Basilica of Saint Francis and the Sacro Convento for the friars to live in. Pope Gregory had declared it to be the “Head and Mother Church of the Franciscan Order” even though Saint Francis himself had given this title to the Portiuncula. If Lady Jacoba did die in 1239 as it notes on her Relics, then she would have seen the completion of the Lower Basilica and perhaps the beginning of its stained glass windows, mosaics and other art work, and the bell tower, but she would not have seen the completion of the Upper Basilica which began after 1239. Just as highlighted body of her great spiritual friend at his funeral, there is little doubt that the finance necessary for the construction of the Basilica would have drawn her attention.

Living in Assisi allowed Lady Jacoba to meet more regularly with Saint Clare and the early companions of Saint Francis. On one such an occasion she was in the company of the great Franciscan contemplative Brother Giles[2] when Brother Gerardino, “a very spiritual man,”[3] called to see him. Gerardino, wishing to draw out Giles, sought to prove by twelve arguments that man is incapable of free action. However, Brother Giles, always had his own peculiar way of dealing with people who came to test his insights. “Can you sing, Brother Gerardino?” asked Giles when the logician had concluded. Then, drawing from his sleeve a small lute made of cornstalk, such as boys use, and beginning with the first string and continuing on each string of the lute, Giles in words of music quashed and confuted the twelve reasons of poor Brother Gerardino.”

The date of Lady Jacoba’s death has been debated by Paul Sabatier, who claimed to have evidence that Lady Jacoba died in 1273. Paul Sabatier unearthed in the Archives of the Sacro Convento two documents which indicate that Lady Jacoba was an almoner[4] for the friars as well as one who shared her own wealth. In a testament (Will) of 1258, three pounds are bequeathed to Jacoba “for clothing”. In another as late as 1273, the Lady Marsibilia, bequeathes twenty soldi to the Lady Giacoma of Rome. Other documents elsewhere, attest to gifts of money to her “for a refection (meal) to the brothers of the church of San Francesco and for one to the brothers of the Portiuncula, and two pounds for a ‘tunic for Brother Leo’.”

As we have seen all too often in the writing of this story there are more questions than answers yet to be researched by others with access to sources. Wills, however, do not come into force until a person dies. However, all this really tells us is that Lady Jacoba was acting on behalf of the friars financially, especially so since they had a vow of poverty and could not accept money. The Capuchin, Fr. Edouard also cites these sources in which money was left to Lady Jacoba. He notes that Jacoba evidently gave up all reference to her noble family in being addressed, for in these documents she is known only as Lady Jacoba of Rome.[5] Another thirteenth century Franciscan collection refers to her as “Madonna Giacomina Romana.”[6]There is every indication therefore that she set up a fund on behalf of the friars. Records in Assisi suggest that money was left her by others to assist the friars who could not hold money of their own, even after she had died.

To Lady Jacoba applies the Gospel beatitude of Matthew: “Blessed are the poor in spirit; theirs is the kingdom of heaven.” She understood from a very early age to care for the poor. Her married name “Frangipani” spoke of a legendary generosity of breaking bread for the poor of the city of Rome. Saint Francis led her to a very high degree of virtue, teaching her to be obedient, Saint Bonaventure tells us, even to the pet lamb he gave her. Saint Bonaventure is not just telling us a lovely story. He too is extoling Lady Jacoba’s virtue as expressed by Saint Francis in the very last paragraph of his Salutation of the Virtues: “Holy Obedience confounds every corporal and carnal wish, binds its mortified body to obedience to the Spirit and obedience to one’s brother, so that it is subject and submissive to everyone in the world, not only to people, but to every beast and wild animal as well that they may do whatever they want with it insofar as it has been given to them from above by the Lord.”

Lady Jacoba dei Settesoli was originally buried in the lower Basilica near the chapel of St Stanislaw. In 1932 when the new crypt was complete the remains of Lady Jacoba were enclosed in a rather small box and on the 3rd of October 1932, the eve of the feast of Saint Francis, her remains were placed in a specially prepared niche where the two stairways meet in the crypt of Saint Francis. Pilgrims from all over the world coming to visit the tomb of Saint Francis stop to greet this pious and holy woman, who following Saint Francis, lived in the spirit of the Gospel as a married person, a mother, a widow and a Franciscan. She understood clearly what today we call “Stewardship” the acceptance that all we possess, talents, estates and finances, belong to God and we are called to administer these gifts on his behalf.

It is then obvious from the placement of her relics that the friars venerate Lady Jacoba dei Settesoli as a holy person, a true friend of Saint Francis and the friars. There is no doubt that she is a fine example especially for the Secular Franciscan Order. It is time for her to take her rightful place in the Franciscan family. It is time for her canonisation or the equivalent of it. Her feast day is the 8th day of February.

[3] This comment, “a very spiritual man” is ironic and meant to say the very opposite. Gerardo of Borgo San Donnino (Today Fidenza) caused a great deal of trouble for the Order because he espoused the doctrine of Abbot Joachim of Fiore. Gerardino was condemned as a heretic because he went so far as to say the Franciscan Order would take over the church. He ended up in prison for the rest of his life. The story is unusual because it says Lady Jacoba was present during this conversation.