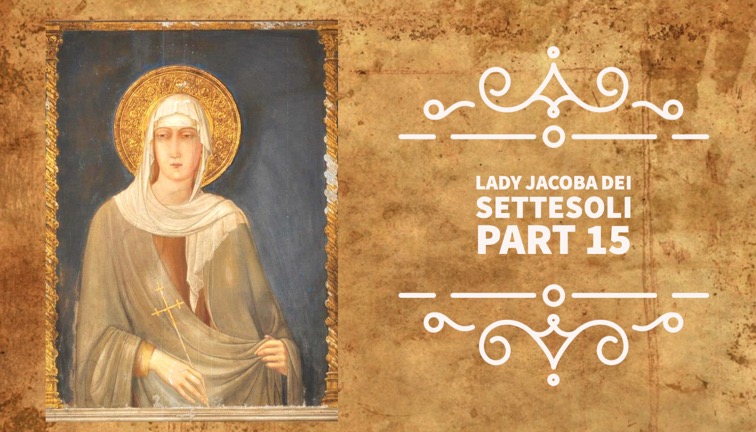 We are already aware that Lady Jacoba had two sons Giacomo[1] (James) and Giovanni (John). Thomas of Celano, writing  The Treatise on the Miracles of Saint Francis between 1250-1252 mentions only Giovanni as swearing that he saw the sacred stigmata of Saint Francis.[2] Lady Jacoba is not mentioned as a witness nor is her son Giacomo (James) because other sources[3] tell us Giacomo died in 1230 and Lady Jacoba died in 1239.

Giacomo died about four years after the death of Saint Francis. We do not know how he died and his age is difficult to determine, possibly he was in his twenties.[4]One sourcesays he was married and had a child before he died. What we do know is that these two young men were the treasure of Lady Jacoba’s life and the reason why her life played out as it did. Unlike some of the great families of Rome, Lady Jacoba had forged close ties with the Holy See. On assuming her husband’s financial responsibilities after his death, she had dealt with the fact that her husband had been engaged in litigation with the Holy See regarding property rights, and the Pope owed money to the Frangipani family.[5] Lady Jacoba renounced these property rights and forgave the debt owed, and as for the family’s debts to the Pope’s nephews, she agreed to pay them from her family property.[6] Because she could not leave her responsibilities, Lady Jacoba had sought from Saint Francis another way to live the ideals he taught her. If she ever thought of becoming a contemplative religious, the raising of her sons as young Roman aristocrats with serious financial and social responsibilities would have precluded it. For Lady Jacoba, the death of her son must have been very hard to cope with, particularly so since he was so young and the potential of his life not fully realised.

It is somewhat fascinating to compare the life of Lady Jacoba dei Settesoli with that of Saint Elizabeth of Hungary with her three children. Both women were wealthy, and both joined the Order of Penance of Assisi, later the Third Order of Saint Francis. The beatitude of the Evangelist Saint Luke, “How happy are you who are poor:” does not seemingly apply to them – they were rich. We have to turn to Saint Matthew, who was present when Jesus spoke. He had been a tax collector and would have been listening very carefully to what Jesus was saying. Saint Matthew puts it this way: “How happy are the poor in spirit; theirs is the kingdom of heaven.” He uses the phrase “in spirit” stressing that this beatitude is for both poor and rich. Everyone is called to understand that what they have is a gift from God. Today the Church uses the word “Stewardship” to remind Catholics that they have a responsibility, in solidarity with others, to use the graces, talents, and finance given to them by God to be of service to others. It means being thankful and responsible to God for all his gifts to us personally.

Some sources say that Lady Jacoba’s other son Giovanni died childless, in 1253, long after the death of his mother. However, the famous English Franciscan scholar, Roselind B. Brooke having noted that Giovanni was still alive when Celano wrote his Miracles in 1252[7] says that Giovanni’s two children, who outlived him were dead by the 9th of January 1254. Pope Innocent IV, Brooke tells us, referred to Giovanni’s widow and to the fact that his two young children Peter and Philippa had not long outlived their father.[8] Celano tells us that Giovanni by that time was a Roman Proconsul and a Count of the Papal (Sacred) Palace. Thus he was an important primary witness to the stigmata of Saint Francis, 26 years after the death of the Saint whose body was hidden and not available for medical investigation.

On the 31st of May 1237, before she went to live in Assisi, Lady Jacoba and her son Giovanni gave to the little town of Marino[9], which they owned, its first Constitution or Statute. In this, they anticipated concessions that would be made in the following centuries which fixed rules and customs for the common good in many other places. The brief attached to the Constitutions of Marino reads:

“In the year of the Lord 1237, the 11th of the pontificate of Pope Gregory IX, the tenth notice of 31 May. Since a simple written document would fall into forgetfulness, when it is concluded between men, therefore we Lady Jacopa and her son John, in whose domain is the castle of Marino, in proposing commitments and conventions to the inhabitants of the aforesaid castle, we want to draw up a public instrument that contains both rules and customs, therefore we, Lady Jacopa and John Frangipane, in this same day in the presence of a notary and witnesses, to this purpose formally invited, with free and spontaneous desire and by means of a solemn contract, we conclude an agreement with the inhabitants of the predicted castle present here and also on behalf of the absent in order to preserve and perpetuate all the good custom subscribed in these chapters. Putting our hand on the Holy Gospels we swear”[10]

Such a Constitution would ensure a clarification for the inhabitants of the town of Marino. It was very important in view of the feudal estates of the time. It shows that Jacoba and Giovanni had the power before the law and the Church to make such a document. Both Lady Jacoba and her son Giovanni[12] were obviously taking care of the family assets together.

In her Will she asked her son to allow her to be buried in Assisi.[13] It would seem that she moved to Assisi very soon after the publishing of the Constitution of Marino. If so it would indicate that she was taking care of business before leaving Rome for good.

When he died in 1253, Giovanni Frangipani left the town of Marino in his Will to the poor of Marino. It was sold to the Orsini Family and the money distributed to the poor of the town.[14] The Orsini family owned the town until 1419 when it was bought by the Colonna family,[15] who owned it until 1914. Lady Jacoba dei Settesoli is listed today among the famous people of Marino and for the past 10 years the town has had a celebration in her honour and her story has been taught in all the schools of the city. A special mosaic of her image was placed in the town piazza and Marino is now a sister town with Assisi.

LOCAL MINISTERS, PLEASE DISTRIBUTE THIS MONTHLY SPIRITUAL MESSAGE TO ALL MEMBERS OF YOUR FRATERNITY BOTH ACTIVE AND NON-ACTIVE MEMBERS.

[1] Giacomo (James) is also called Graziano, by some sources. He is most often listed before Giovanni.

[5] The Capuchin scholar Edouard d’Alencon examined a document from 1217 that show Jacoba, by then a widow, had resolved some financial disputes with the Holy See. Pere Edouard commented that this is in line with what Francis required of both the friars and the early tertiaries: to avoid litigation and quarrels.

[6] The indication is that she had her own sources of revenue from her own family property and that she was wealthy in her own right not just because she married into the Frangipanni family. It is an interesting point, that she did not use Frangipanni money to settle these debts. It shows an agile financial mind and a clear understanding of her place in the Frangipani family.

[7] The Treatise on the Miracles of Saint Francis by Thomas of Celano was not written until 1250 -1252, so James would have been dead by that time. Giovanni Frangipani, the son of Lady Jacoba, died in 1253, the same year St Clare died.

[8] Roselind B. Brooke The Image of St Francis: Responses to Sainthood in the Thirteenth Century. Cambridge University Press, Cambridge 2006. Page 35 footnote 12. Roselind Brooke speaks only of Giovanni; she does not mention Giacomo at all.

[9] Marino is 20km from the centre of Rome on the edge of Lake Albano and about 4 km around the lake from Castel Gandolfo the summer residence of the Pope. In 1266 the Orsini Family bought the town.

[10] I have called this, a brief, as it is not the Constitutions, but a testimony to it.

[11] A Notary Public or Notary, is usually a practising solicitor or attorney, appointed for life by a State Supreme Court, and given statutory powers to witness documents, administer oaths. They are more important than a Justice of the Peace.

[12] According to Alberto Crielesi, Illustrious personages Castellani: Jacopa de’Settesoli
footnote No 2. Govanni died in 1253 leaving no descendants giving the castle of Marino to the monasteries of SS. Andrea and Saba in Rome and Santa Maria di Grottaferrata for the poor of Marino and that the testamentary executors, Cardinal Giovanni Orsini and Fra Tommaso, Prior of Santa Sabina, sold for the sum “of 13 mila libre di provisini romani” to Cardinal Matteo Rosso Orsini; procrator “of the poor of Marino” whowas a certain Pietro of Vicovario (Vicovaro).

[13] Alberto Crielesi says in Illustrious personages Castellani: Jacopa de’Settesoli
footnote No 1 that “Il Grande Enciclopedia di Roma”, edited by C.Rendina, Newton Compton and publishers, Rome, 2000, instead proposes, as date of birth for Lady Jacoba the year 1165.” That would have made her 74 when she died. Wadding citing documents in Assisi says Lady Jacoba died in 1239. Alleged documents from Marino that cite her together with her son Giovanni in 1273 are rejected because the castle of Marino was by then in the hands of the Orsini Family and Giovanni and Lady Jacoba were both dead.