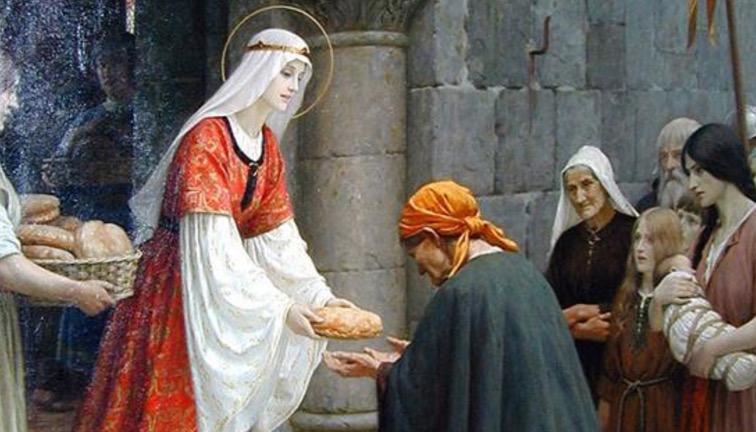 Witnessing to the good yet to
and obliged to acquire purity of heart
because of the vocation, they have embraced,
the Seculars should set themselves free to love God
and their brothers and sisters.[1]

It is, with the Royal Tertiaries that we find a tremendous out-pouring of charitable works. Their fervor and zeal for the poor was identical to that of the poorer Tertiaries, but the vastness of their charitable works is due to their position, influence and their great financial resources. Among these two stand out:

St Elizabeth of Hungry (120771231) was amazing in her care for the poor and is another good example of the fact that such, “extravagant charity” is not acceptable to all, for when her husband died she was forced by his relatives to leave the castle and live in poverty herself, which she realised was a blessing in disguise. Dying at age 24 she was canonized in 1235.

St Louis IX King of France (1214-1270), ranks well with St Elizabeth of Hungary, however being a King he had much more power. Besides many Convents and Monasteries, he built hospitals at Paris, Pontoise, Compíegne, and Vernon. De Joinville his biographer writes that, “In addition to all this, the King gave countless generous alms, to poor religious, to poor hospitals, to poor sick people, to poor gentlemen and gentlewomen, and girls, and to fallen women, to poor widows and women in childbed, and to poor old or sick minstrels.” It is said, that he worked in the hospitals and even slept there; feeding the sick himself, while his noblemen, because of the stench of the sick, waited outside. St Louis IX was also noted for his reign of peace because at the very beginning of his reign he settled ongoing disputes with both Spain and England. The absence of war allowed him to focus on the building of the great Cathedrals.

Even the Franciscan Mystics like Bl. Angela of Foligno (1248-1309), did not neglect the poor and needy. Angela and her community of Tertiaries did not keep an enclosure, but visited the sick in the hospital and even went to nurse the lepers.

This care of the sick reached into the extraordinary in Tertiaries like the young St Roch of Montpellier (1350-1379).[2]He tended the plague-stricken victims with such devotion that miraculous healings began to occur simply by him making the sign of the cross on the victim’s forehead. For this reason, he became so famous and popular that he felt he had to escape to the forest to be free of the demands of the people. There in the woods, he almost died of the plague and starvation. The story goes that each day a dog faithfully brought him food. Perhaps the question should be asked: How many good Tertiaries died in nursing the sick, especially during the plague?

As peace makers, the Tertiaries were an excellent bulwark against the greed, ambition, and the feuds of the times, which plagued families. Among these stands out St Elizabeth of Portugal (1271-1336) who seemed to spend her whole life trying to stop wars between the Kings and Nobles.

John of Peace (1353-1433) a converted soldier from Pisa, began one of the great examples of Tertiary activity. Pere Leon tells us that, “John’s life was entirely devoted to works of charity. He chastised his body with an iron chain and other severe austerities” John founded a pious society at Pisa, the members of which regularly contributed to a common fund. These alms, with great delicacy and kindness, were secretly distributed to poor people who were too ashamed to beg. He succeeded in implanting so solid a spirit of charity in this Confraternity, that as long as the organization existed, which was up to the disturbances caused by the French Revolution this noble work continued.

St Albert Adam Chmielowski (1845 -1916) called “Brother Albert” was a Polish artist, who became a tertiary. At the core of his spiritual transformation was his mystical experience of Christ, whose descerated image he discerned in the poor. For their sake, he took up quarters in humble shacks, living as a pauper among paupers, so that by way of an “apostolate of presence” he might uplift people in their social condition and, even more, point out to them the way to God. To assure continuance and stability of this undertaking, he became a religious in 1887, thus giving origin to the Order of Brother Servants of the Poor in 1888. He died with a reputation of sanctity on December 25, 1916. In a life of profound contemplation and ardent love of God, he drew inspiration for projects of social welfare based on the evangelical principle of love of neighbour. During his almost thirty years of life among the oppressed, together with the men of his religious order,, he erected homes for the poor in many places. In Poland, and elsewhere, Brother Albert is referred to as another St. Francis of Assisi. Pope John Paul II canonized him in Rome on November 12, 1989.

A more modern story of the generosity of the Third Order comes from Detroit at the beginning of the “Great Depression.” The Stock Market collapsed on the 24th of October 1929. During this terrible time, many friaries became legendary for their charity to the poor. For example, long lines of men waited patiently for food at the Franciscan friary on 31st Street in New York.

However, in Detroit, at the Capuchin Friary, the situation became extreme and friars like Fr Bernard Casey OFM Cap, struggled to feed everyone from the front door of the friary as the lines of men reached 600 and 700 morning, noon and evening. To cope with this situation, the Guardian asked the friar Director of the Third Order if the Tertiaries could help. Immediately, the Third Order turned over their Third Order Hall for the care of these poor men and established the famous Soup Kitchen of Detroit. Then, for the first five years, ladies of the Third Order, beginning at 7:00am and working until 5:00pm prepared, in the beginning, soup and later on stew for the thousands of men who came to the soup kitchen.[3] It was in the midst of this situation that Blessed Bernard Casey lived his miraculous life and ministry. He was beatified on the 18th of November 2017.

PLEASE, distribute this Monthly Spiritual Message to all MEMBERS of your FRATERNITY.

[2] The Feast of St Roch is a Secular Franciscan feast. So too, is the Feast of St Pope Pius X. His mother, also a tertiary, is quoted as saying to her son, as she came up to kiss the Ring of the Fisherman, “You must kiss my wedding ring first, because without it you would not have the ring of the Pope!” He did.

[3] Catherine Bicknell, Ph.D. Breaking Bread and Mending Spirits: Detroit’s Capuchin Soup Kitchen 1929 -1979. Fidelity Press, Detroit, Michigan. 1979. pp. 15, 16ff.. The fact that the Third Order was there at the very beginning of the Soup Kitchen in Detroit, handing over their Fraternity Hall so as to found the Soup Kitchen and providing meals for at least five years is an extraordinary story. It was estimated that the soup kitchen, had provided over 10 million meals by 1979, which was its 50th year of operation. It continues to this day.