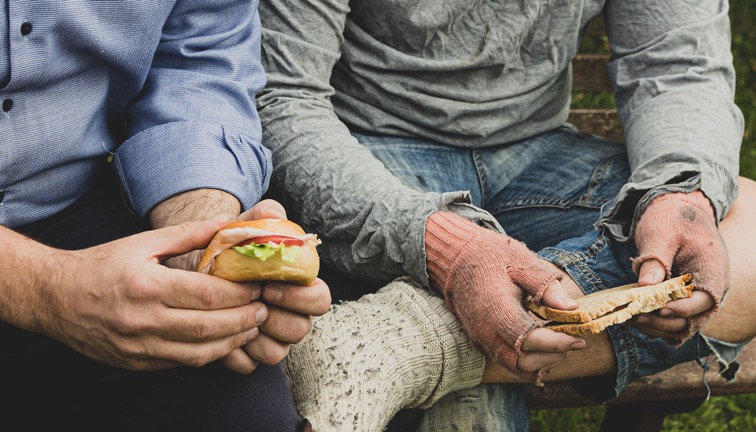 There is a saying of Jesus that is not in the Gospels, but it is in the New Testament. It comes to us from St Paul and is found in Acts 20:35.

“In all things, I have shown you
that by so toiling one must help the weak,
remembering the words of the Lord Jesus, how he said,
“It is more blessed to give than to receive.”

Number 14 of the Rule of the Secular Franciscan Order states:

Let the Secular Franciscans
seek a proper spirit of detachment from temporal goods
by simplifying their own material needs.
Let them be mindful that according to the gospel
they are stewards of the goods received
for the benefit of God’s children.[1]

Down through the centuries[2] the “Brothers and Sisters of Penance” as they were first called and then the “Third Order of St Francis” as they were called until 1978, and now the “Secular Franciscans” have been renowned for their works of charity.

Blessed Luchesio (1174 – 1241)[3] and his wife Buonadonna, called the “First Tertiaries were involved in hospital work and care of the poor and needy. In particular, Luchesio went out in search of sick people. Sometimes, he traveled great distances to bring them to hospital for treatment. Bl. Davanzato (1200 – 1295)  [4] , a tertiary priest, used the income of his parish for the care of the poor and assisted them to the point of sometimes having only bread and water for his meals. He even gave up his bed for poor pilgrims and slept on the floor. This devotion to the poor saw the tertiaries, with great sensitivity, in Moderna, organized assistance for poor people who were ashamed to beg by collecting alms for them. We see this in the life of Bl. Humiliana Cerchi (1219-1246).

This concern of the Tertiaries for the poor constantly led into conflict with their spouses, their family, their relatives, their friends and even strangers.  Bl. Novellono of Faenza (1200-1280)had difficulty with his wife when he first began to care for the poor, as did Luchesio with Buonadonna. Bl. Humiliana had trouble with her husband as did St Veridiana (1182-1224) with her relatives. A band of ruffians murdered Bl. James of Pieve, a priest Tertiary because he protested against misappropriation of part of the revenues of his hospital.

In Rome, the tertiaries ran four benevolent homes. At Cortona, they maintained the Hospital of Mercy. In Florence, there was the famous Hospital of St. Paul. There the tertiary infirmarians were popularly known as “bonomini.” At Imola, the Brothers and Sisters of Penance were in charge of the Hospital of St. Francis until 1488. At Piacenza, there was a whole series of splendid foundations which were in no way inferior to the best-run welfare institutions of today. Poor sisters and female pilgrims were given shelter at the Hospital of St. Elizabeth: the brotherhood owned some houses which it let at a low rent to other needy tertiaries; it was the mission of one group of tertiaries to reclaim fallen women. In Reggio Emilia, from 1238, the tertiaries visited the poor in their own homes and kept a dispensary and a food store, both free of charge, for the benefit of poor people of any category, whether laymen, clerks, or religious.

In Paris, in 1300, Guy de Joinville founded a tertiary brotherhood of infirmarians. At Mons, in Belgium, the tertiaries gave free tuition to fifty poor children; in other towns, there were tertiary priests dedicated to training young men for the priesthood.

In Naples Queen Sancha, who became a tertiary and then a Poor Clare, founded two nunneries, St. Mary Magdalen and St. Mary of Egypt, for homeless women. Any number of similar examples could be given, not only in Italy but all European countries.

Often in their zeal to assist the poor they completely exhausted their funds. At times this caused great resentment towards them, because of their constant requests for assistance to care for the poor. However, in some cases, this zealous simplicity was rewarded by a miracle, and they were saved from embarrassment. St Veridiana had the miracle of “The empty chest full of beans again” and Bl. Novellono had his miracle of “An empty cupboard full of bread again.”  St Frances of Rome (1384-1440) stunned her husband to silence when after she had given away enormous amounts of corn and wine during a famine, he found his empty granary filled again, and a huge empty wine cask replenished.

Most Tertiaries lived simple lives, uncomplicated by miracles, and probably the best example of this was, Bl. Peter of Siena (d. 1289). He was a simple comb maker who worked steadily at his trade, grew in holiness and became one of the most famous members of the Third Order. Later on in his life, he lived with the friars while still going to his shop in the city to work, during the day. He was then able to give all his profits away to the poor.

PLEASE distribute this Monthly Spiritual Message to all MEMBERS of your FRATERNITY.

[1] Specifically the poor, the sick and all who suffer in anyway.

[2] From 1221 when their Rule was approved, until today the Tertiaries have been involved in works of charity for 800 years.

[3] The main source for these Saints and Blessed of the Third Order of St Farncis is: Cecily Hallack, Peter Frederick Anson and Fr Marion Alphonse Habig OFM. These Made Peace: Studies in the lives of the beatified and canonized members of the Third Order of St Francis of Assisi. Paterson, New Jersey., St Anthony Guild Press, 1957. It was also published by Burns & Oates London, 1957. Cecily Rosemary Hallack (1898 – 1938) was the author of 60 works among them a number of books and pamphlets. She began this particular book on the Tertiary Saints and Blessed somewhere around 1932, but died in 1938, at the age of forty, before it was completed. Peter Anson, a Tertiary in his foreword to the book, thanks her and acknowledges many people for their assistance in sorting through Cecily’s notes and updating a great deal of her source material. In particular he mentions the tremendous work of Fr Marian A. Habig, OFM. There is little doubt that any OFS library that does not have a copy of this book, now out of print, is all the poorer in terms of inspirationfor its absence.