Francis And The Sultan – Part One 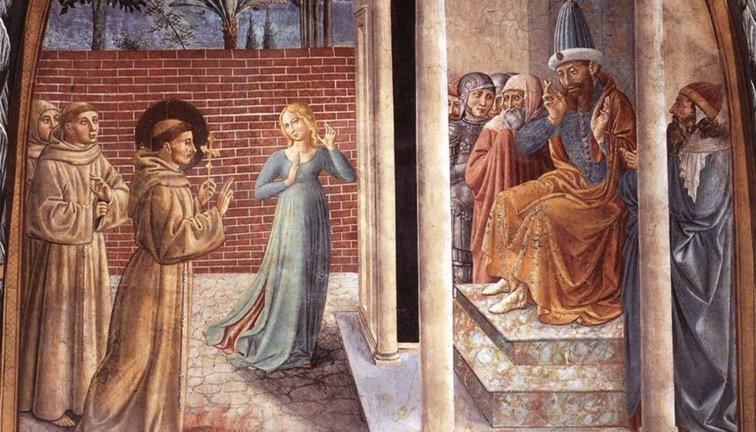 A Moment of Dialogue

Let us consider the famous trip to Egypt that Francis made in 1219 to the very centre of the fighting of the Fifth Crusade. Remember that when Francis first started out in his religious life, he and Br Bernard went to the church of San Nicolo in Assisi and consulted the book of the Gospels and one of the texts read: “If anyone wants to come after me, let him deny himself, take up his cross and follow me.” (Matt. 16:24)

In Francis’ time “to take up the cross” virtually meant only one thing “to join the Crusades” when men would mark their shields and vesture with a red cross to symbolise their fight against those who were called “the enemy of the cross of Christ”. The purpose of the Crusades was to free the Holy Land from the Saracens (Easterners). They called themselves “Muslims”.

We know that Francis had presented himself and his followers to Pope Innocent III and described his way of life as “taking up the cross” in order to follow Christ, but Francis and his followers restored the Gospel meaning to this phrase “taking up the cross” and following the lead of Pope Innocent III, who proposed the “Tau” cross as a symbol of his spiritual reform for the 4th Lateran Council, Saint Francis saw the Tau as a symbol not of violence, but of healing and peace-making, because God so loved the world. (John 3:16)

Although the desire of martyrdom, with its theme of shedding ones blood for Christ seemed to be fuelling Saint Francis’ wish to go to the Muslims, it was not in fact his driving force and anyone who thinks it was has made a big mistake. Martyrdom was a distinct possibility and indeed a grace, but the fraternal love of the Gospel life was the over-riding force in Saint Francis’ life. He wished in all charity to convert the Muslims to Christianity, to introduce them to a loving relationship with Jesus Christ, not just as a prophet, but as the promised “messiah” the Son of the Living God. Martyrdom then is a leitmotif or a theme in the life and spirituality of St Francis, but not the real reason he went to the Muslims.

Saint Francis had already tried to go to Morocco, but he became ill when he got to Spain and had to turn back home to Italy. Saint Anthony of Padua was so taken by the bravery of the Franciscan friars, that he met, who were later martyred in Morocco, that he left the Augustinians and became a Franciscan, so that he could go to preach to the Muslims in Morocco. He eventually ended up in Sicily where there was a huge Islamic influence and later he arrived in Assisi. Ultimately his Crusade was spiritual. He was one of the greatest preachers in Christendom.

In the summer of 1219, Francis travelled from Italy to Egypt to the town of Damietta which was then on the coast of the Mediterranean Sea (now inland). He ended up right in the middle of the Fifth Crusade (1213 – 1221) and began helping the Christian soldiers who were losing the battle and were injured or sick. However, he realised that if he was to achieve anything significant, he had to go and meet the head of the Muslim army, the Sultan of Egypt. He first exhorted the Christian Crusaders to cease their fighting, then he crossed to the Muslim side to meet one of the greatest leaders in Islamic history, Malek al- Kâmil.

This sultan was a nephew of the great Saladin and after him and his own father, who died fighting the Christians in 1218, he became the sole ruler of all Muslim territory. He spent enormous sums of money to fortify the city of Damietta and completed the construction of the citadel of the city of Cairo.

Francis, accompanied by friar Illuminato, against the advice of the head of the Christian forces, Cardinal Pelaggio Galvani, crossed the desert, the – de-militarised zone separating the Christian and Muslim forces, and went into Muslim territory. The two friars, Francis and Illuminato, went into the enemy territory wearing the Franciscan habit which is made to symbolise the cross. So they carried the cross to the enemy.

One Franciscan theologian, Lawrence Cunningham, said that Francis considered himself to be a spiritual crusader. His peaceful and truthful approach helped in his outreach to Muslims. Christians generally considered the Muslims as a huge external enemy, and this was exaggerated by the rhetoric coming from the Crusades. People knew about Muslims through the stories the men brought back from the fighting. That is probably how Francis learnt about them also, so what he did was indeed very courageous, remembering nevertheless that perfect love casts out all fear. (1 John 4:18)