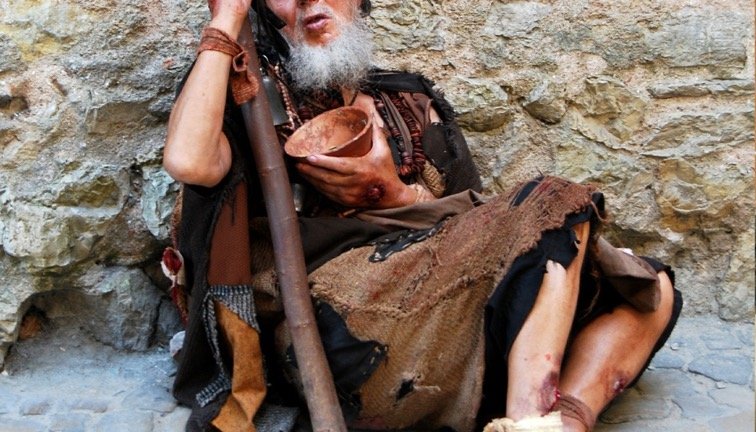 It was a cold day that Sunday in the northern hemisphere, the Feast of Christ the King. The church’s parking lot was filling up quickly. People were chatting among themselves before they entered the church.  Outside the church door, there was a man leaning up against the wall. He was almost lying down as if he were asleep. He was wearing a long trench coat that was almost in shreds and a hat pulled down over his face. His shoes looked thirty years old.

The early arrivals assumed this man was homeless and asleep, as they walked on through the door of the church. They gathered in the porch to greet one another for a few minutes. Some commented on the man outside but no one thought to ask him to come in out of the cold.

A little later, Mass began. The congregation stood up and waited for the Parish Priest to process down the aisle. Instead, the church doors were opened and in came the homeless man who walked down the aisle with his head down.  People stared and whispered.  He made his way up to the altar, where he took off his old hat and coat.  There stood the Parish Priest. He was the “homeless man.”  No one said a word.  The celebrant vested at the altar and proceeded with the Mass, up to the homily.

“Brothers and sisters, I don’t think I have to tell you what I’m preaching about today.”  Then he announced a page number and invited everyone to join him in singing the hymn,

“Whatsoever you do to the least of my brothers, that you do unto me”.

Well, he made a point, but I wonder did anyone speak to him for a week.

There’s a description of the Last Judgment that runs like this:

“Listen Christian, I was hungry and you formed a club and discussed world hunger; I was in gaol and you made a general intercession at Sunday Mass and prayed for the release of prisoners; I was naked and you put me out of your mind as an immodest temptation; I was sick and you thanked God in your prayer group for your health; I was homeless and you spoke to me about God’s loving-kindness; I was lonely and you left me alone to fit in your devotions. You were very religious, but I was still hungry, lonely, and cold.”

Could it be that we mistake the trappings of religion for true religion? Belonging to church clubs, prayer groups, discussion groups, attending Sunday Mass, proclaiming the Word of God, taking part in the liturgy, practising devotions, holding high moral principles –  all of these are expressions of religion. But the essence of true religion can still be sadly lacking in our lives, and that is: compassion.

The Book of Exodus (22: 21-27) goes into the detail of how love of neighbour is expressed towards the defenceless: the stranger, the widow and orphan, and the poor. The same book describes our God as “a God of tenderness and compassion, slow to anger, rich in kindness and faithfulness” (Ex 34:6). True religion binds us to the God of compassion.

Jesus assures us (Matt 22:34-40), that we cannot love God without loving our neighbour. We can measure our love of God accurately by our love for other people, especially those who most need us to accept them or to help them.

Religion has many trappings. Some are helpful, such as rituals, and even essential, such as divine worship. Others, such as devotions, we can choose or leave, to suit our taste.

But the essence of true religion is compassion. St James says it clearly: “Pure, unspoilt religion, in the eyes of God our Father is this: coming to the help of orphans and widows when they need it, and keeping oneself uncontaminated by the world” (James 1:27).

Everyone recognized Pope John XXIII as a truly religious man, a man of compassion. He said, “My own temperament inclines me towards compliance and a readiness to appreciate the good side of people and things, rather than to criticize and pronounce harsh judgments … Any kind of distrust or discourtesy shown to anyone, especially to the humble, the poor or the socially inferior, every destructive or thoughtless criticism, makes me writhe with pain.”

Compassion means full immersion in the condition of being human, just as it meant for the Son of God, when he was made man and dwelt among us.

When God in Jesus shares his compassion with us, we reach out to those who rarely experience love and so are most in need of it, those poor in any way, the lonely, children, strangers, and all who suffer.

God’s compassion asks us to go where it hurts, to enter into places of pain, to share in other people’s brokenness, fear, confusion, and anguish. Compassion challenges us to cry out with those in misery, to mourn with those who are lonely, to weep with those in tears.

Even little children can be compassionate. After Mass, a little boy ran up to me and said, “When I grow up, I’m going to give you lots of money.” I said, “Well, thank you very much. That’s great, but why?” “My dad said that you’re the poorest preacher we’ve ever had.” The little fellow was compassionate. I don’t know about his Dad.