Celebrating 40 Years Of The Rule 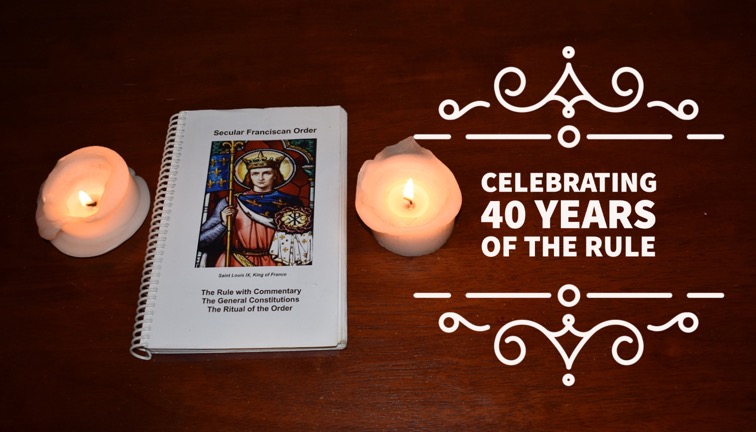 Forty years ago,[1] Blessed Pope Paul VI (Sixth), soon to be canonized,  [2] approved the new Rule of the Secular Franciscan Order[3] and with it gave a new name to the Third Order of Saint Francis.[4] The very name “Secular Franciscans” focuses the attention of the Order, outward towards others, towards our Secular Franciscan Mission to be a leaven of Gospel life in the midst of the world. “Secular Franciscans, together with all people of good will, are called to build a more fraternal and evangelical world.”  [5] Pope Paul asked us to look towards a future world, for which he coined the expression “a civilization of love.”[6]

This world vision is taken up again and again by Saint Pope John Paul II as a renewed hope for a better world. It is not surprising that this theme is reflected in the Constitution of the Secular Franciscan Order approved by the same Saint Pope John Paul II on the 6th of February 2001. It is here in the General Constitution of the Secular Franciscan Order, in ACTIVE PRESENCE IN THE CHURCH AND THE WORLD, Articles: 17;18;19; 20;21;22 & 23 that it is given a fuller expression.

In his message for the celebration of the World Day of Peace on the 1st of January 2001, just one month earlier than his approval of our OFS General Constitutions, Saint Pope John Paul II titled an address: “Dialogue between Cultures for a Civilization of Love and Peace.” His opening paragraph begins:

“At the dawn of a new millennium, there is growing hope that relationships between people will be increasingly inspired by the ideal of a truly universal brotherhood. Unless this ideal is shared, there will be no way to ensure a stable peace.”

In Chapter 10 of this same document he refers back to Blessed Paul VI:

Dialogue leads to a recognition of diversity and opens the mind to the mutual acceptance and genuine collaboration demanded by the human family’s basic vocation to unity. As such, dialogue is a privileged means for building the civilization of love and peace that my revered predecessor Pope Paul VI indicated as the ideal to inspire cultural, social, political and economic life in our time. At the beginning of the Third Millennium, it is urgent that the path of dialogue be proposed once again to a world marked by excessive conflict and violence, a world at times discouraged and incapable of seeing signs of hope and peace.

So, the Rule of the Secular Franciscan Order approved in 1978 reflects wonderfully this vision coming out of Vatican II. This is clearly revealed in the Endnotes of the previous edition of “The Trilogy” (Rule, Constitutions, and Ritual). In the new edition of “The Trilogy” these Endnotes are now Footnotes so that they are more readily available to the text as it is being read, and so more immediately show the impact of the Vatican Council in shaping the new Rule. In all, there are some 15 footnotes from Vatican II Documents to be found in the Secular Franciscan Rule. The most direct of these are from Apostolicam Actuositatem[7] (The Decree on the Apostolate of the Laity).

This watershed document on “Apostolic Activity” needs to be studied in full if we are to understand the vision of Vatican II. This was the first time in history that the Church focused on the specific role of the laity in the Church’s Mission of Evangelization. Before this, there was a tendency to see the laity as assisting the Priests and Religious in their work of evangelization. Now, in a specific document, the laity are challenged to find their proper place in the Mission of the Church.

The Rule of the Secular Franciscan Order is not for timid hearts. Shyness is not a virtue; it is an affliction. From a formational point of view, it cannot be allowed to masquerade as humility. Formation in the Secular Franciscan Order is for service and caring. We can only achieve that by being “mindful that anyone ‘who follows Christ, the perfect man, becomes more of a man himself,’ let them exercise their responsibilities competently in the Christian spirit of service.”[8]

So the end of formation is to prepare a person for service. First towards the Fraternity to which they belong and then to the wider Church. For this reason, formation is designed to assist us to grow into leaders and apostles in every aspect of our lives. This leadership is to take its criteria, not from the hard world of competence and efficiency, but from the life of our Lord Jesus. If it is going to be attentive and loving it will need to come closer to the Lord, the font of mercy. It will need to SEE, JUDGE AND ACT as he did with compassion and concern. We are reminded of the comment of St James, “But someone will say, ‘You have faith; I have deeds.’ Show me your faith without deeds, and I will show you my faith by my deeds.”

Let me repeat myself, the Secular Franciscan Rule, as we have it today is not for the fainthearted. It is for those who are very serious about their faith and are prepared to commit themselves to forging a civilization of love first within their own fraternity by learning the art of dialogue with each other – there is nothing more destructive to fraternity than having to live with those who will not communicate.

PLEASE distribute this Monthly Spiritual Message to all MEMBERS of your FRATERNITY including Spiritual Assistants and isolated members.

[4] Originally called, “The Brothers and Sisters of Penance” and then “The Third Order of Saint Francis” now the “Secular Franciscan Order”. Its post nominals (OFS) follow the Latin name: ORDO FRANCISCANVS SÆCVLARIS.

[6] Pope Paul VI , Regina Coeli Address, May 17, 1970. “It is a civilization of love and peace which Pentacost has inaugrated – and we are all aware how much today the world still needs love and peace!”

[7] Apostolicam Actuositatem means “Apostolic Activity”.  Apostolicam Actuositatem follows upon Lumen gentium, the “Dogmatic Constitution on the Church”, of 21 November 1964, which in Chapter IV, discusses the laity, by which they mean all the faithful except those in Holy Orders or religious institutes. “They live in the ordinary circumstances of family and social life, from which the very web of their existence is woven. … led by the spirit of the Gospel they may work for the sanctification of the world from within as a leaven. In this way they may make Christ known to others, especially by the testimony of a life resplendent in faith, hope and charity.