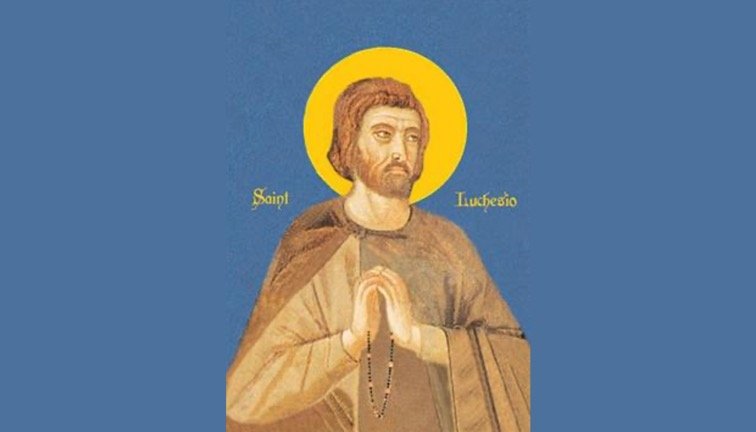 … I am carrying my Lord Jesus Christ …

When we are searching for the very first member of the Secular Franciscan Order it is difficult to choose between Lady Jacoba dei Settesoli from Rome and Blessed Luchesio Modestini. He was the first Secular Franciscan to be beatified and as such his story is put before us by the Church to inspire us to desire a deeper personal intergration and integrity of life that leads us to the perfection of charity – holiness.

In the beginning, Luchesio Modestini was entirely concerned with material success. So much so, that he had a bit of a reputation of being an avaricious man. His wife Buonadonna was of a similar disposition. As time went on they had no children. One day the grace of God touched Luchesio and changed his way of thinking. He realised how foolish it was to strive only after worldly goods, when he could take nothing with him to eternity. He began to practice works of mercy and to perform his religious obligations with fidelity and he succeeded in winning his wife over to a similar outlook on life.

Since they had no one to care for but themselves, and Luchesio feared that in conducting his business he might lapse into covetousness, so he decided to give up his business entirely. He and his wife divided everything among the poor and retained for themselves only as much land as would suffice for their own support. Luchesio tilled and worked this property with his own hands.

About this time Saint Francis came into the region of Tuscany where they lived. After his sermon on penance, a great many people were inspired and desired to leave everything and enter the friary. But the saint asked them to remain calm and to persevere in their secular vocation, for he was going to give them a special Rule of Life according to which they could serve God quite perfectly even in the world.

Then St Francis visited Luchesio, with whom he had become acquainted through former business transactions. St Francis greatly rejoiced, praising God’s grace, to find this avaricious young man so altered. Luchesio in response asked St Francis for special instructions for himself and his wife so that they might lead a life in the world that would be pleasing to God. St Francis happily explained to them his plan to establish a Secular Franciscan Order with its own Rule of Life for lay people and Luchesio and Buonadonna asked to be received into it at once.

Thus according to tradition, they became the first members of the Order of Penance, which was popularly called the Third Order of St Francis. Today it is known as: The Secular Franciscan Order.

After Luchesio Modistini had become a member of Franciscan family he rapidly advanced towards holiness. He practiced penitential austerities: often he fasted on bread and water, slept on the floor, and during his working in the field he nurtured a spirit of prayer and devotion to God in his heart. His generosity to the poor knew no bounds, so that one day there was not even a loaf of bread in his own house. When still another poor man came to the door looking for food, Luchesio asked his wife to go see if perhaps there was still something that they could find to help him. His wife lost her temper and scolded him severely; his mortifications she said had made him crazy and if he continued they themselves would have to go hungry. Luchesio asked her gently to please go look in the pantry. She abruptly left to do as he had asked. When she opened the door of the pantry she was completely shocked for it was filled with all the best sorts of bread. From that time on his wife tried to outdo her husband in doing good to others who needed care.

When a plague raged in the town of Poggibonzi and the surrounding places, Luchesio went out with his donkey ladened with necessities for the sick. When he did not have enough to supply all, he began to beg for more on behalf of the distressed. Once he carried a sick cripple, whom he had found along the road, to his home on his shoulders. On the way he met a frivolous young man who asked him mockingly: “What poor devil is that you are carrying on your back?” Luchesio replied joyfully: “I am carrying my Lord Jesus Christ!”

When at last, Luchesio himself lay very ill and near to death, his wife asked her husband to pray that she might die with him. That night she fell ill with a fever and died before him. He passed away, with a holy longing for God on April 28th 1260. He was made a Blessed by Pope Pius VI because many miracles were worked at his tomb.

Not everyone in this world can act as Blessed Luchesio did. Not everyone is free of obligations towards others who are entrusted to their temporal care; nor has everyone the grace and the vocation for such extraordinary virtues. In fact, if anyone feels that God calls them in this way, then they should seek counsel with a spiritual director.

But everyone can and should strive, while following their occupation and business, to live as best they can to live a life of virtue and especially care for the poor and sick. They can do this if they conduct their business as a special work offered to God through which they also acquire a livelihood for themselves and their family. They also may add to this treasure by endeavouring to put themselves, in some way, at the service of their fellow brothers and sisters and by promoting Christian morality as best they can by setting a good example themselves.