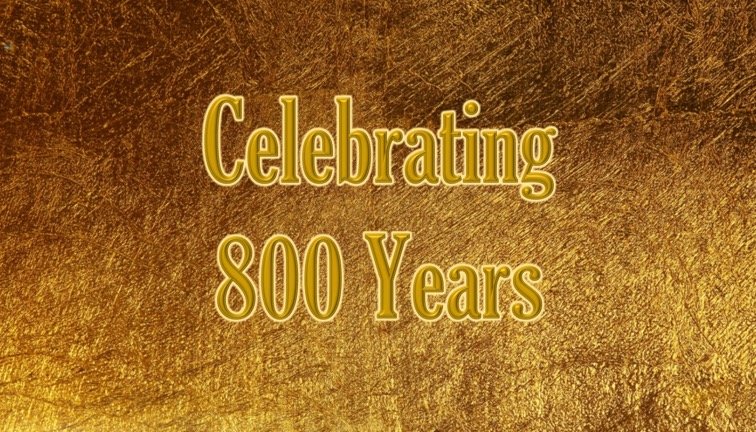 The time of the life of St Francis (1182-1226) was a turbulent time in the world. The world was moving from a feudal system (the system by which people gave certain services such as military support, to a more powerful man in return for lands, protection) to a new order, one which was a more cooperative, united community.  It included a merchant class, (traders and businessmen) such as St Francis’ father, Pietro Bernardone, and travellers. There were also new and interesting religious ideas developing.

Corruption and worldliness were present in the Church where Emperors had significant say in the appointment of bishops and the Pope failed to correct the decline in moral standards among the members of the Church.

At the same time the Church was undergoing a significant “Reforming Movement’. It began with the Monastery of Cluny in France, which was founded in 910, with the goal of returning to the original teachings of the Gospel. This monastery, which lived by the Rule of St Benedict, became the centre of spirituality. The Pope made the Abbot directly responsible to Holy See rather than to the Bishop. This course of action reduced the influence and importance of the bishop in the eyes of the people. Other monasteries followed this example.

These changes enabled a return to the original spirit of the Rules of the monasteries, as well as to the Church itself and would have been remarkable.

There were several reasons for this rebirth: the end of the barbarian invasions, considerable increase in population, the decline in the feudal system, the expansion of cities, economic and cultural development, and reform of the Church. The Church was burdened with two widespread evils – simony (buying or selling sacred objects or positions) and concubinage (a sexual relationship between people who are not legally married). These evils were strongly linked to interference in the Church by the Emperor and the feudal lords.

Pope Nicholas II (980-1061) and Pope Gregory VII (1015-1085) played significant roles in the restructuring of the Catholic Church and returning to its freedom from Imperial and feudal power.

Pope Nicholas II initiated the move to have the Pope elected by the College of Cardinals only (Synod of 1059) rather than by the clergy, the people and the Emperor. This struggle to change lasted for several decades until the Council of Worms in 1122 agreed to Pope Nicholas’ proposal.

Monastic orders believed that earthly life was full of spiritual dangers, and the only way to salvation was to establish an individual relationship with God, in the harshness and self-denial found in a monastery. Many members of the clergy who were living corrupt and immoral lives and dedicated to worldly interests had opposite beliefs. Monasteries were not free of corruption either. Many monks came from noble families and abbeys were built and paid for by powerful feudal lords.  Sometimes favours and pardons were expected in exchange for financial support. This form of belief was held for a long time by many people.

However, the great changes taking place in society after the year 1000 had an impact on the religious beliefs of the laity. A new conscience was emerging. People wanted to return to the ways of the early Christian Church, to bring the Gospel to daily life, to bring the Church to the world and they wanted to believe that even the laity could live the Gospel life and be saved. They believed that Christian perfection could be reached without having to reject society and the world.

Because of this desire to return to the spirit of the Gospel, many movements sprang up in the Church. Some protested against the Church because of its corrupt practices and others went further opposing Church doctrines and taking up heretical beliefs.

In the history of the Church the penitential movement has very ancient origins. It included those who, after choosing to be baptised, intended to conform their lives to God’s will. However, the penances varied greatly from one place to another. For those who continued to commit serious sins forgiveness was possible, provided that they really changed their interior life and daily behaviour by doing penance, which consisted of prayers, abstinence, and alms. Entering the ‘penance’ meant expressing one’s will during a public ceremony in the presence of the bishop, accepting the new condition of visible life to everyone, for example, sitting at the back of the church, staying in the kneeling position, wearing a worn-out habit, shaving of the hair, or having a long beard. Only after having served the time established for penance, was it possible to be admitted to the category or Order of Penitents. This lifestyle included wearing ‘miserable clothing’ (tunic), refusing to carry out work that could be harmful for one’s soul, for example commercial and financial activities, as well as not participating in popular festivals and shows. It was also forbidden to carry weapons or participate in wars.

Other characteristics of the penitent’s life were:
– Fasting before Easter, Pentecost and Christmas
– Voluntary flagellation was also considered a punishment
– Pilgrimage to distant places of considerable religious importance
– Hermitism (isolation from the world in order to seek only God) by both monks and laity

The great economic and social changes also began to impact on the ‘penitential state’. No longer were the laity expected to ‘escape from the world’ to follow the Christian ideal but instead, by putting the Gospel at the centre of their lives with the desire to imitate the poor and humble Christ. This ideal led to many lay faithful groups coming together. The groups were made up of married and celibate people. They did not necessarily live together, but formed fraternities with the same commitment to penitential life. Pope Innocent III (1160-1216) welcomed these new lay movements within the Catholic Church, and he favoured the penitential movements. It was he who reopened the case of the Humiliated and approved them with a letter dated June 1201. It contained the Propositum with which the state of life of the Humiliated was regulated: humility, patience, charity, fasting and prayers were its inspiring principles. We can therefore consider the Third Order of the Humiliated, a form of life that precedes the Franciscan Third Order.

It was the extraordinary human and religious experience of Francis of Assisi that brought to an end the long process of renewal of the penitential state. “In him, it is possible to grasp at the same time the summit of the most authentic human and Christian aspirations of the laity and the most luminous proposal for a solution. His example, his words will nourish an impressive flowering of men and women who, under different forms, will undertake the path of Christian perfection.” (Fr. RIVI, Francis of Assisi…p72)

When Francis came to understand that the seductions of the world (money, the dream of fulfilling himself as a knight, participating in the experiences of the cheerful brigade of his companions…) were not able to give a profound meaning to his life, he began an interior journey in search of a new lifestyle that led him to discover and live the centrality of the Gospel.

At the beginning of his new religious experience Francis feels the call of the penitential spirituality, as he himself writes in his Testament:

The Lord gave me, Friar Francis, to begin to do penance like this: when I was in sins it seemed too bitter to see lepers, and the Lord Himself led me among them and I showed mercy to them. And as I moved away from them, what seemed bitter to me was changed into sweetness of mind and body. And after that, I stayed a while and then was changed forever.

Francis did not escape from the world to retire to a monastery or to live in a wood or in a hermit’s cave. The isolation in which Francis and his first companions lived is ‘generally a movement that does not at all exclude contact with the world…’ and his desire to ‘model himself according to the form of the holy Gospel could only move him in the direction of an apostolic life, that is a more active life among the people’. (G. GASAGRANDE, An Order for the laity. Penance and Penitents in the thirteenth century, in Francis of Assisi and the first century of the Franciscan history, Turin, 1997, p238)

It is Thomas of Celano himself in Vita Prima (35) who emphasises that Francis was conscious of having been sent by God to lead to Him the souls for which He had died, and if we are to believe in the Actus Fioretti (chapter XVI) Francis was certain of this by following the advice of Friar Silvestro and Saint Claire. But Innocent III also encouraged him to carry on with preaching, as Thomas of Celano narrates (Vita Seconda, 17) who writes:

Then Francis, using the faculty granted him, began to sow seeds of virtue, preaching with greater fervour all around, in cities and villages.

The preaching was addressed to all: men and women, young and old, healthy and sick, workers and peasants, nobles and commoners…, a message of conversion and penance to live the Gospel consistently. The theme of ‘penance’ is central in the life of the Saint and in his preaching.

What is its content of his preaching? The two versions of the Letter to the Faithful can be considered the core of his ‘norms of life and salvation’ (A. FREGONA, The Secular Franciscan Order cit. p83) which, starting from love for God, become concrete in love of neighbour and enemies, in mercy, charity, humility, purity, simplicity, contempt for the body and its vices, frequent confession and Eucharistic communion… These are indications of life that Francis and his first companions offered in their contact with people. Through their preaching that was delivered with serenity and optimism, it inspired an increasing number of people, married and celibate, to choose to live as penitents, remaining in their own homes, without giving up their family or their work.

The state of voluntary penance, therefore, existed since ancient times and was a form of life that the Church recognised for those lay people who intended to embrace it and which could be expressed in different forms. The ‘form of life’ indicated by Francis for the laity was different, new and original.  It was the basis of the intense revival of the penitential movement, especially in central northern Italy: a phenomenon so considerable that it was taken into consideration by the Roman Curia.