The Stigmata of St Francis 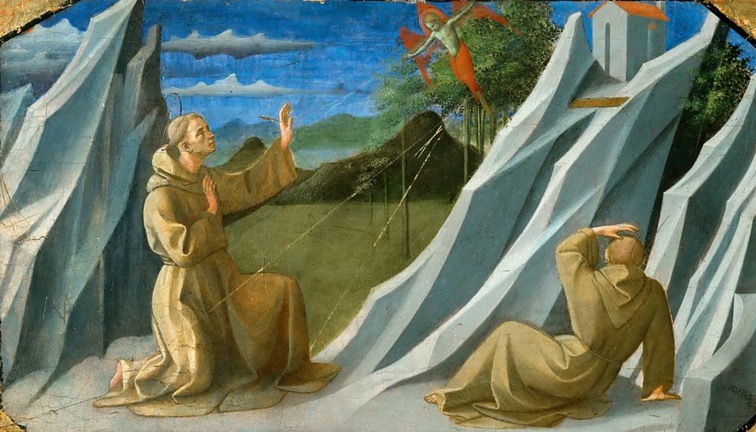 Two years before his death in 1226, St Francis went to the beautiful mountain of La Verna, and there he lived on the mountain with a few of the brothers spending his time in prayer. As he entered deeper into prayer and became lost in the love of God, to the things of this world, he was raised aloft on the wings of contemplation, and the friars who were with him saw him raised above the ground floating in the air, and they were utterly amazed by this grace from God.

Then St Francis went even deeper into the woods to be utterly alone with God. There he began to meditate on the mystery of Christ’s terrible suffering on the cross. He prayed in this way: “My Lord Jesus, grant me two graces before I die: first that I may feel in my body and in my soul, as much as possible, that pain which you experienced in the hour of your most bitter passion. Second, that I may feel in my heart, as much as possible, the excess of love which you were inflamed with, so as to willingly endure such suffering for us poor creatures.”

While he was praying on the mountainside, St Francis suddenly had a vision of a Seraphic Angel, who descended from heaven. The angel appeared in the form of the crucified Jesus with six resplendent and flaming wings and it marked him with what is called the “stigmata” – the wounds of Christ appeared in his hands and feet and side. Francis was filled with a marvelous joy, and then the vision left him and he realised that he had excruciating wounds on his hands and feet and side just like Christ had on the cross. He was amazed and filled with great joy and sadness at the same time. Joy at being able to share the sufferings of his Lord and sadness that Jesus should have to suffer such a cruel death.

From that time on St Francis was very sick and could do very little. He had to be helped all the time by his friars and even had to ride on a little donkey to get from one place to another. He tried to keep this miracle of the stigmata a secret and kept his hands and feet covered, but slowly the people began to realise that something extraordinary had happened to him.

By then he had become famous, thousands of friars followed his way of life and many sisters followed the Rule of St Clare and a huge number of lay people also lived as St Francis taught them as Brothers and Sisters of Penance. When St Francis died many of the brothers saw the wounds in his feet and hands and side and the news of this miracle quickly spread everywhere. Such a huge crowd of people came to Assisi that the knights had great difficulty controlling them. Br Elias, who was in charge of the friars was so fearful that people would try to steal the body of St Francis or tear it to pieces for relics that he had St Francis buried in secret in the foundations of the Sacro Convento.

Only two years later St Francis was made a saint by the Pope amidst great rejoicing of the people and to the praise of God, who worked so many miracles at his tomb.

May the season of Lent lead you to La Verna and on to Calvary!