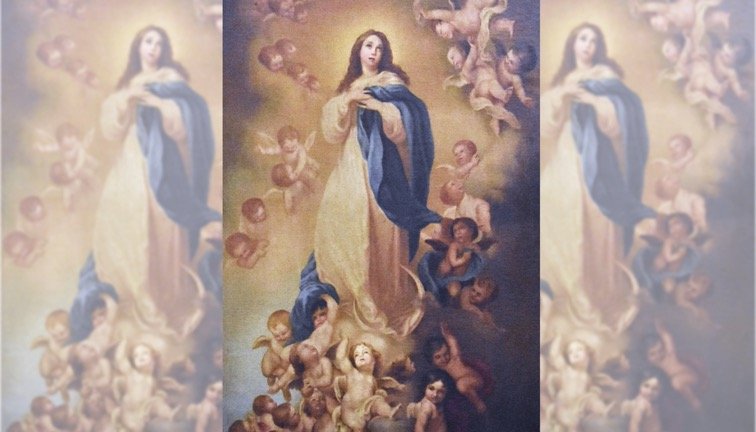 Brother Thomas of Celano tells us in his Second Life of St Francis[1] about the extraordinary love that Saint Francis had for the Mother of Jesus:

[Saint Francis] embraced the Mother of Jesus with inexpressible love,
since she made the Lord of Majesty a brother to us.[2]
He honored her with his own Praises[3]
poured out prayers to her[4]
and offered her his love in a way that no human tongue can express.[5]
But what gives us greatest joy
is that he appointed her the Advocate of the Order[6]
and placed under her wings[7]
the sons [and daughters][8] to be left behind,
that she might protect and cherish them to the end.
Oh, Advocate of the Poor!
Fulfill towards us your duty as protectress
until the time set by the Father.

Of the three branches of the Franciscan 1st Order it must be said that the Conventual Franciscan Friars today are at the forefront of preaching devotion to the Blessed Virgin Mary under the title “The Immaculate Conception.” This, to a great extent, is because the Conventual friar, Saint Maximilian Kolbe[9] (1894-1941) was the modern champion of the Immaculate Virgin Mary. At his beatification by Saint Pope Paul VI on October the 17th 1971 the pope called him a “Confessor of the Faith” but at his canonisation by Saint Pope John Paul II on the 10th of October 1982 the Polish pope declared him a “Martyr of Charity.” This made him the first saint in the Church who was canonised pre-eminently, for charity, because he gave his life for a fellow prisoner in the infamous Nazi Concentration Camp of Auschwitz.

In their General Chapter on May 27th 1719, the Conventual Franciscans noted: “Since its origin and throughout its history the Order of Friars Minor Conventual has surrounded the Conception of the Blessed Virgin with special manifestations of devotion. Therefore, in the footsteps of their fathers, the Venerable Definitory has decreed to establish the Blessed Virgin, under the title of Immaculate Conception, as their main Patroness, in the firmest hope that more and more every day in our Order devotion and veneration toward the Mother of God and toward the mystery of her Immaculate Conception should increase and be developed.” [10]  It became necessary for the Conventual Franciscans to do this – because the other Franciscan branches had already done so.

What is so striking about this statement, is the date – 1719![11] The dogma of the Immaculate Conception was not defined and promulgated until 1854. In fact, four years later in 1858, the Parish Priest of Saint Bernadette Soubirous told Bernadette to ask “The Lady” who was appearing to her for her name. He was somewhat surprised that “The Lady” said, “I am The Immaculate Conception.”[12]

In 1910 Saint Pope Pius X, (a Secular Franciscan) permitted the members of the three orders of Saint Francis to add to the Litany of Loreto the invocation: “Queen of the Franciscan Order, pray for us!”

After the reforms of the Second Vatican Council, a new General Roman Calendar was promulgated in 1969 by Saint Pope Paul VI. It has subsequently been amended over the years by the Holy See with new celebrations. The last major revision was in 2002, but since the publication of the Roman Missal, Third Edition, the following celebrations are among those that have been added to the General Roman Calendar or otherwise changed:[14]

Hail, O Lady, Holy Queen,
Mary, holy Mother of God,
Who are the Virgin made Church,
chosen by the most Holy Father in heaven
whom he consecrated with His most holy beloved Son
and with the Holy Spirit the Paraclete,
in whom there was and is all fullness of grace and every good.

The Holy See around about 1980 gave the Franciscan first Orders a new Formula of Profession.  We find it in the Capuchin Constitutions of 1982.  It included the words “Mary Immaculate.”

Therefore, I entrust myself with all my heart to this brotherhood,
so that by the working of the Holy Spirit, after the example of Mary Immaculate,
and through the intercession of our Father Francis, and of all the saints,
with the help of my brothers, I may constantly strive for the fullness of love
in the service of God, of the Church, and of all people”

While there can be little doubt that all the friars have a great devotion to The Blessed Virgin Mary, as noted before, the Conventual Franciscan friars in particular have a long and deep devotion to the Immaculate Conception which shows in their legislation.

Conventual Constitutions (1999) Chapter 1 Art. 1. §6 and §7 we read: §6: The Order was begun and developed under the par­ticular protection of the Blessed Virgin Mary. The de­fense of the truth of her Conception is recognized as “the golden thread” in the history of our Order. Therefore, every work of the brotherhood is to be lived in the service of the Church of God, so that under the guidance of Mary Immaculate the King­dom of Christ may be extended through all the earth.

Conventual Constitutions Chapter 2: Art. 47:1-2 “All the friars are to venerate, with fervent piety, the Blessed Virgin Mary in the mystery of the Immaculate Conception, and as the special Patroness of the Order and its Queen. They are to celebrate this feast of hers everywhere and with the greatest solemnity possible, while also renewing the consecration of the Order to her, and with great zeal promoting her devotion.

The present Capuchin Constitutions (2013) in Chapter XI. Our Life in Consecrated Chastity states: “Let us cultivate an intense relationship with the Blessed Virgin Mary, she who is all beautiful from the moment of her Immaculate Conception, the sublime example of complete consecration to God and of love for that divine Beauty which alone can totally satisfy the human heart.”

The present Constitutions of the OFM Friars (2016) Art. 26: §2 The friars are to have a special devotion to the Virgin Mary, in the mystery of the Immaculate Conception, for she is “the Virgin made Church”. They are to make known and foster Franciscan forms of the cult of Mary, and are to imitate the Patroness of the Order, who called herself “the handmaid of the Lord”. (Lk 1:38)

The legislation of the Secular Franciscan Order does not refer to Mary under the title, Immaculate Conception, however the Rule 9 notes: “The Virgin Mary, humble servant of the Lord, was open to his every word and call. She was embraced by Francis with indescribable love and declared the protectress and advocate of his family. The Secular Franciscans should express their ardent love for her by imitating her complete self-giving and by praying earnestly and confidently.”

In the OFS Constitutions Article 16 we read:

The Profession of the Secular Franciscan Order states:

I, N.N.,
by the grace of God,
renew my baptismal promises
and consecrate myself to the service of his Kingdom.
Therefore, in my secular state,
I promise to live all the days of my life
the gospel of our Lord Jesus Christ
in the Secular Franciscan Order
by observing its rule of life.
May the grace of the Holy Spirit,
the intercession of the Blessed Virgin Mary
and our holy father St. Francis,
and the fraternal bonds of community
always be my help,
so that I may reach the goal of perfect Christian love.

Let us end this message with a famous painting of the Immaculate Conception done by the Spanish artist Bartolomé Esteban Murillo (1617-1682) for the Capuchins in Seville. 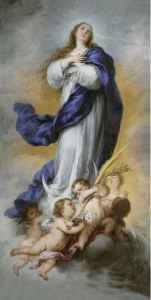 This, 8th of December 2022, let us again celebrate with joy this beautiful feast of the Immaculate Conception which asserts that, “from the first moment of her conception, the Blessed Virgin Mary was, by the singular grace and privilege of Almighty God, and in view of the merits of Jesus Christ, Savior of Mankind, kept free from all stain of original sin.”

[2] “Oh, how glorious it is to have such a brother.” “Exhortation of St. Francis to the Brothers and Sisters of Penance” (Written Circa 1210 – 1215) It is at the beginning of the Rule of the Secular Franciscan Order, Prologue.

[5] Romans 8:26: “The Spirit helps us in our weakness. For we do not know what to pray for as we ought, but the Spirit himself intercedes for us with groanings too deep for words.

[6] Advocate (the one who pleads their cause especially in a Court of Law – before the Throne of God), patron, helper, benefactor.

[7] Under her mantle. There are many images of Mary with friars under her mantle (e. g. in the Refectory at Rencavata, Capuchin Friary, Camerino)

[8] Square brackets indicate an addition to the text. In this case to include the whole Franciscan Family.

[11] On the 7th of May 2020 the Conventual Order prepared a special Consecration of the Order to Our Lady for the “300 anniversary of our establishing the Blessed Virgin Mary under the title of Immaculate Conception as the Foremost Patroness of the Order of Friars Minor Conventual.” Pope Clement XI approved the consecration of the Order to the Immaculate on the 7th of May 1720. And now for the footnote of a footnote: https://www.ofmconv.net/docs/lettere-mg/eng-consacrazione-Madonna.pdf

[12] Even before this, in 1830 Saint Catherine Labouré saw a vision of Our Lady as “The Immaculate Conception” asking her to have a medal made with the words, “O Mary, conceived without sin, pray for us who have recourse to Thee” inscribed on it with the two hearts of Jesus and Mary embossed on the back.

[13] It is doubtful in our present age that Catholics in general understand what a Plenary Indulgence means. An indulgence is defined in the Code of Canon Law (can. 992) and in the Catechism of the Catholic Church (n. 1471): “An indulgence is a remission before God of the temporal punishment due to sins whose guilt has already been forgiven, which the faithful Christian who is duly disposed gains under certain prescribed conditions through the action of the Church which, as the minister of redemption, dispenses and applies with authority the treasury of the satisfactions of Christ and the saints.” Please check out the following webpage to understand better the meaning of partial and plenary indulgences and the conditions for receiving the indulgence: https://www.ewtn.com/catholicism/devotions/conditions-13362