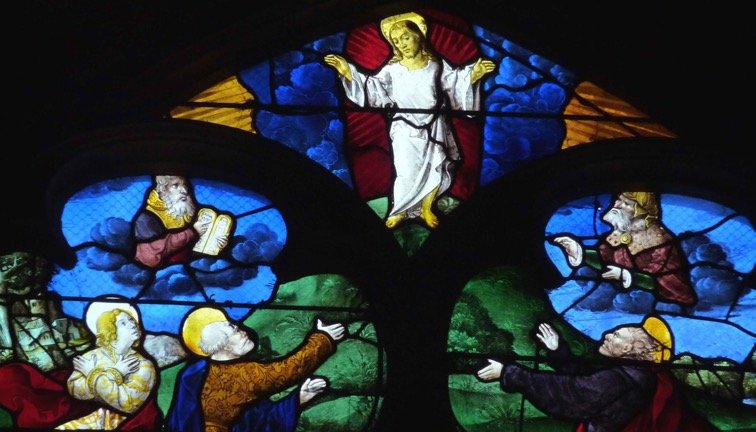 “Six days later, Jesus took with him Peter and James and John and led them up to High Mountain where they could be alone by themselves. There in their presence he was transfigured: his clothes became dazzlingly white…Elijah appeared to them with Moses; and they were talking with Jesus…” (Mk 9:2,4)

Jesus told his disciples of his forthcoming passion and of the suffering he would undergo. He exhorted them to follow him on the way of the cross and in the way of selfsacrifice, that they would undergo themselves in their performance of the Gospel and their profession of faith in the name of Jesus and of his Resurrection.

A short time later at Caesarea Philippi, he wanted to strengthen their faith. Yet to do this strengthening of their faith Jesus had to be blunt and firm with his disciples. St. Thomas Aquinas teaches that “…just as the archer does not accurately launch an arrow without first looking at the target. It is necessary, above all, when the road is rough and hazardous that care must be taken. It is fitting, therefore, for Christ to reveal to his disciples the splendour of this glory, to become transfigured before them, since in the same glory he would one day transfigure them…) (St. Thomas Summa Theologiae, 2, q45, al)

After his conversion to the Lord, Francis had one important mission and desire in his heart and mind. That was to preach the Gospel and follow the fullness of the Gospel as his rule and life and nourishment. From the first moment he heard the voice of the Lord, “Who is it better to serve, the lord or the vassal…?” Francis replied, “The Lord.” Jesus replied “Then why are you serving the vassal?” This answer slowly began to germinate in the heart of Francis. He did not know that he would be called to give his whole life to his Crucified Lord Jesus.

Francis began to realize that Jesus was calling him to follow his way which was the way of The Cross. This call demanded a full response to Jesus. Francis had seen in a dream, “…a hall full of armour…” meant for him and his knights. Slowly Francis saw that clinging to his worldly ways, goods and selfish passions did not really correspond to the Lord’s call. Yet in all this he continued to trust in the Lord who had begun this stripping of self in order to follow Jesus.

Jesus took his time in transforming Francis into his own “image and likeness.” Jesus called Francis to follow him in an extraordinary and radical way. He called Francis from being possessed by what he owned to being totally possessed by that all consuming fire of love of the Cross that would make Francis into that “image” that was a complete conformation and replica of Jesus. He, who gave Francis all he owned, shows Francis holy poverty with which he would be completely filled and become an “alter Christus”.  This transformation into the image of Christ took many years. During this process Christ’s consuming Fire burned brightly and fiercely in the heart of Francis and was made visible in his apostolic works and love of the lepers, the poor, the rich, and the clergy. No one was exempt from Francis’s fiery words of the Gospel that went forth from his mouth like arrows deep into their target.

This Transformation demanded a very high price from Francis. He had to lose everything he was, he loved and all that he wanted, in order to become the herald of the Good News. Jesus drew Francis with the bonds of love that allowed Him to change Francis’s heart into a furnace of love that would attract others to him. He wanted Francis to go before everyone and show them what could happen in one who heard the Word of God and allowed this living and Spirit-filled word to take root in one’s heart. This Word would then begin to root out of the heart all false images one has of God.  Moreover, this Word would also reconfigure the heart and mind to see and desire to become like Christ.

As Jesus was working in the heart of Francis, Francis did not lose his freedom or chivalrous desire to love and care for his brothers and for others. Jesus increased in Francis’s heart a greater capacity to see poverty as embraced in the life of Jesus on the Cross as a greater and more beautiful ‘bride’ than any worldly good. Nor did Francis ever see that worldly goods were evil, he saw that the misguided use and hoarding of possessions led one to become a slave to them. Jesus freed Francis from this desire of possession of goods to want only to be possessed by Jesus Himself. Francis became single-minded in his pursuit to live the Gospel at all cost and to that end he gave up his most coveted possession, his will, to

Francis allowed Jesus to draw him to the Cross the first moment he saw the Crucified Image in that broken down old church. One could say that this ‘old broken down church’ was a symbol of Francis’s own heart and the state of society at that time. When Francis saw and heard the Crucified One utter those words to him that “…he was to go and repair that church…” Bonaventure tells us that “He was poor and lowly, but the Most High God looked upon him with such condescension and kindness that he not only lifted him up in his need from the dust, of a worldly life, but made him a practitioner, a leader and a herald of Gospel perfection” (St. Bonaventure, “The Life of St. Francis,” p.179).

PrevPreviousOur Life Of Faith
NextFrancis – The Sign That Points To ChristNext