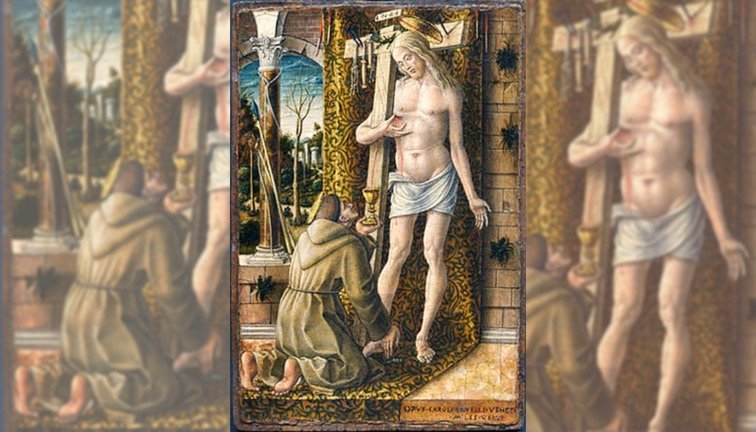 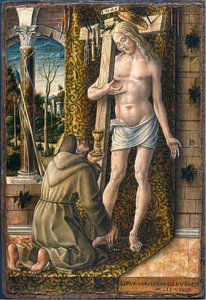 This is an amazing image of St. Francis and Jesus. It is not a typical image of St. Francis. It is a gold panel painting by Carlo Crivelli (1490-1495). It shows St. Francis (with his visible Stigmata) collecting blood pouring from the side of Christ into a cup, with the column, the ropes, and the stick with the vinegar-soaked sponge from the Flagellation and Passion of Christ. Christ, Himself holds a Cross, from which hangs the other instruments of the Passion: the crown of thorns, whip, nails. This has a direct association with the receiving of the Stigmata by St. Francis.

This month we celebrate the Precious Blood of Jesus. As like last month dedicated to the Sacred Heart, there is a definite Franciscan theme which is part of our spirituality.

The Fioretti (The Little Flowers of St. Francis) gives an account of this incident in the life of Francis.

On September 14th, 1224, a Saturday, Francis of Assisi, noted ascetic and holy man, a future saint – was preparing to enter the second month of a retreat with a few close companions on Mount La Verna, overlooking the River Arno in Tuscany. Francis had spent the previous few weeks in prolonged contemplation of the suffering of Jesus Christ on the cross, and he may well have been weak from protracted fasting as he knelt in the first light of dawn.

The Fioretti states: “he began to contemplate the Passion of Christ … and his fervour grew so strong within him that he became wholly transformed into Jesus through love and compassion … While he was thus inflamed, he saw a seraph with six shining fiery wings descend from heaven. This seraph drew near to St. Francis in swift flight so that he could see him clearly and recognize that he had the form of a man crucified … After a lengthy period of secret converse, this mysterious vision faded, leaving … in his body a wonderful image and imprint of the Passion of Christ. For in the hands and feet of St. Francis forthwith began to appear the marks of the nails in the same manner as he had seen them in the body of Jesus crucified.”

In all Francis found that he bore five marks: two on his palms and two on his feet, where the nails that fixed Christ to the cross were traditionally believed to have been hammered home, and the fifth on his side where the Scriptures say that Jesus had received a spear thrust from a Roman Centurion.

Why, though, to begin with, did the stigmata materialize in the 13th Century? Part of the answer seems to lie in the theological trends of the time. The Catholic Church of St. Francis day had begun to place much greater stress on the humanity of Christ and would soon introduce a new feast day, Corpus Christi, into the liturgical calendar to encourage contemplation of Jesus’ physical sufferings. Religious painters responded by depicting the crucifixion explicitly for the first-time portraying Jesus who was plainly in agony from wounds that dripped blood.

For Francis, amazing as this experience might have been as well as his companions, it was situated in prayer. Thus, prayer was the privileged locus wherein our Seraphic Father Francis could really let Christ transform him into Himself. On La Verna Francis’ life kept letting the Lord change his life from glory to glory simply because he was faithfully “observing the holy Gospel of our Lord Jesus Christ.” (Regula Bullata 1:1) However, the brave Francis knew that was essential for him to be at the Lord’s feet so as to welcome Him as his Master and Saviour. These special times were for Francis privileged moments of intense prayer and fasting. Francis’ receiving of the Stigmata was a confirmation that his very being was now lost to be found anew in Christ Jesus for whom he gave everything so as to follow him more closely.

The interpretation St. Bonaventure gave of this extraordinary event in Francis’ life is incredibly challenging. First of all, he defines Francis a “man of the Gospel” who humbly welcomed Christ’s Cross as the outset of his conversion. From that instant, Francis was completely adamant in carrying the Cross and the Passion of the Lord, “thus giving an example to others, with such certitude.” In so doing he arrived at “the summit of Gospel perfection.”

By his life Francis proclaimed, and continues to proclaim in our day, the saving word of the Gospel. It is difficult to find a saint whose message could withstand so profoundly “the test of time.”

Nothing speaks so eloquently in all the world as blood. A speeding car hits a pedestrian. Immediately a crowd gathers curious fascinated. Soon cries of pity and horror rise up as the onlookers see the victim in a pool of his own blood.

From a shabby rooming house, a rifle cracks out in the evening stillness … Dr. Martin Luther King Jr falls mortally wounded. A nation is shocked as more blood flows in the streets.

A festive spirit prevails as an election victory is being celebrated … Suddenly there is gunfire and Senator Robert Kennedy lies fatally wounded, his blood gushing forth in profusion.

We watch the news reports of random shooters entering schools and places where there are a gathering of people and he begins to fire on innocent children and others where there is blood spilled everywhere. Again, we are horrified and shocked!

Blood is a symbol. Scarcely anything speaks so eloquently as blood. And the Blood of Christ speaks better. It is a better sign and symbol than all the blood of creation. Christ’s blood spoke and is still speaking, not vengeance, but as Francis came to know so well, of mercy, of love, of forgiveness.

Blood also speaks of life. In a blood transfusion, life itself, as it were, flows into a body … just as blood flowing from wounds in a body, means that life is departing from the body. Jesus’ Blood is indeed precious for it is divine. It is also precious as it stands for obedience. “He was obedient unto death, even death on the Cross….” Through his obedience, we are made one, we are united, and Francis came to know that we are made brothers and sisters in Jesus Christ, and we are made one as brothers and sisters in the Lord.

It is interesting to note that so many of the friars who followed Francis were known for devotions related to his own: St. Bonaventure to the Sacred Heart of Jesus; Bl. Duns Scotus to the Kingship of Christ; St. Bernadine of Siena to the Holy Name of Jesus; St. James of the Marches to the Precious Blood; St. Paschal Baylon to the Holy Eucharist.

St. Bonaventure who admired St. Francis’ whole life was centered on the Incarnation and the Cross. Bonaventure notes without hesitation that any decision of penetrating into the mysteries of the spiritual life must be purified in the Blood of the Crucified, must allow itself to be only by the burning love of the Crucified without ceasing. Bonaventure’s contribution was also on a more or less popular level. He wrote Latin Hymns on the subject of the Passion and the Cross, and the life of Christ entitled “Lignum Vitae” which proved to be a source meditation on the humanity of Christ. It played a vital role in the spread of devotion to the Sacred Humanity of Christ under various aspects.

Bl. Duns Scotus is also another spiritual pillar for devotion to the Blood of Christ. Scotus insists strongly upon the reality of the humanity of Christ, and this played no little part in the formation of his own piety and that of the Franciscan Order. He had a deep influence upon the lives many Franciscan Saints such as St. Bernadine of Siena, St. John of Capistrano, and St. James of the Marches all of whom had a great devotion to the Passion and to the Precious Blood.

Number 10 of the Rule of the OFS exhorts:

“Uniting themselves to the redemptive obedience of Jesus, who placed His will into the Father’s hands, let them faithfully fulfill the duties proper to their various circumstances of life. Let them also follow the poor and crucified Christ, witness to Him even in difficulties and persecutions.”

“As Jesus was the worshipper of the Father, so let prayer and contemplation be the soul of all they do and say. Let them participate in the sacramental life of the Church above all the Eucharist. Let them join in liturgical prayer in one of the forms proposed by the Church, reliving the mysteries of the life of Christ.”

In this month of the Precious Blood let us pray:
O God, who wonderfully renewed the signs of your Son’s Passion
in the flesh of our Holy Father Francis
to inflame in our hearts with the fire of your love,
grant, through his intercession,
that conformed to the death of your Son,
we may also share in his resurrection.
Who lives and reigns with you in the unity of the Holy Spirit,
God, forever and ever.
AMEN!