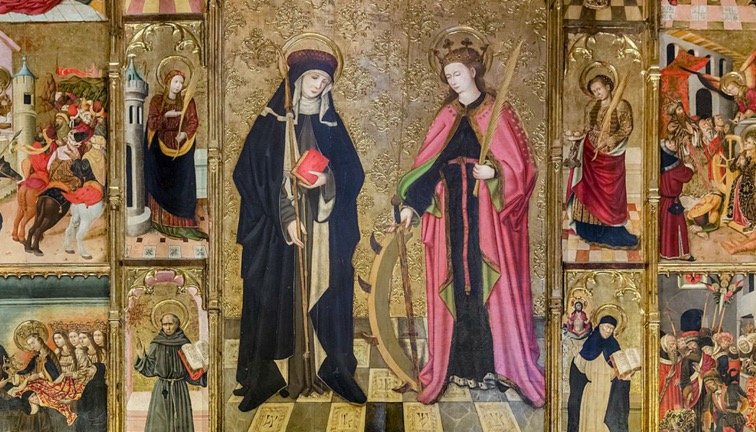 Princess Agnes was betrothed at the age of eight to Henry, aged ten, the son of Emperor Frederick II. But six years later, the betrothal contract was cancelled. Agnes’ father, King Ottokar, then wanted her to marry Henry III of England, but the Holy Roman Emperor Frederick II vetoed this arrangement and asked Agnes to marry him and become the Holy Roman Empress. Agnes declined the offer because, by then, she wished to follow in Christ’s footsteps as a Poor Clare. To do this, she asked the assistance of Pope Gregory IX. It is said that Frederick II remarked: “If she had left me for a mortal man, I would have taken vengeance with a sword, but I cannot take offence because, in preference to me, she has chosen the King of Heaven.”[3]

Why did Lady Clare write[4] to Princess Agnes and share so profoundly her personal spirituality? Is it possible that Pope Gregory IX asked Clare to write to Agnes? We may never know the answer to this question. However, the fact that Clare did write at all is a special blessing for us because it gives us a window into her personal relationship with Christ. Clare speaks of Christ, her beloved Spouse, with very intimate words. Writing to Agnes she declares:

“You have chosen a life of holy poverty and bodily want with your whole heart and soul. Thus, you took a spouse of a more noble stock, who will keep your virginity ever unspotted and unsullied, the Lord Jesus Christ,

Whom in loving, you are chaste;
in touching, you become purer;
in embracing, you are a virgin;
Whose strength is more robust,
generosity loftier,
Whose appearance is more handsome,
love more courteous,
and every kindness more refined,
Whose embrace already holds you;
Who has adorned your breast with precious stones,
placed priceless pearls on your ears,
surrounded you completely with blossoms of springtime
and sparkling gems
and placed on Your head
a golden crown as a sign of Your holiness.[5]

Therefore, most beloved sister, or should I say, Lady worthy of great respect, because you are the spouse and the mother and the sister[6] of my Lord Jesus Christ and are beautifully adorned with the banners of an undefiled virginity and a most holy poverty, be strengthened in the holy service of the Poor Crucified.”

The letter, although very formal, nevertheless rings with a sense of an intimate dialogue between two women who greatly respect each other where the one already married (to Christ) is sharing with a bride to be.

“I have led your excellency and holiness, as best I can, to beg with humble prayers, in the heart of Christ, that you be strengthened in His holy service, progressing from good to better, from virtue to virtue[7] so that He Whom you serve with that total desire of your soul may bestow the reward for which you so long.”

In speaking about the spirituality of Saint Clare, Pope Benedict XVI wrote:

St Clare’s spirituality, the synthesis of the holiness she proposed, is summed up in the fourth letter she wrote to Agnes of Prague. Saint Clare used an image used widely in the Middle Ages that dates back to Patristic times: the mirror. And she invited her friend in Prague to reflect herself in that Mirror of the perfection of every virtue which is the Lord himself.[8] She wrote:

“Happy, indeed, is she to whom it is given
to drink at this sacred banquet
so that she might cling with her whole heart to Him
Whose beauty all the blessed hosts of heaven
unceasingly admire,
Whose tenderness touches,
Whose contemplation refreshes,
Whose kindness overflows,
Whose delight overwhelms,
Whose remembrance delightfully dawns,
Whose fragrance brings the dead to life again,
Whose glorious vision will bring happiness
to all the citizens of the heavenly Jerusalem,
which [vision],
since He is the radiance of eternal glory
is the brightness of eternal light and
the mirror without blemish.
Gaze upon that mirror each day,
O Queen and Spouse of Jesus Christ,
and continually study your face in it,
that you may adorn yourself completely,
within and without,
covered and arrayed in needlework
and similarly adorned
with the flowers and garments of all the virtues,
as is becoming, the daughter and dearest bride
of the Most-High King.
Indeed, in that mirror,
blessed poverty,
holy humility,
and inexpressible charity shine forth
as, with the grace of God,
you will be able to contemplate them throughout
the entire mirror.
Look, I say, at the border of this mirror,
that is, the poverty of Him
Who was placed in a manger and wrapped in swaddling clothes.
O marvellous humility!
O astonishing poverty!
The King of angels,
the Lord of heaven and earth,
is laid in a manger!
Then reflect upon,
at the surface of the mirror,
the holy humility,
at least the blessed poverty,
the untold labours and punishments
that He endured for the redemption of the whole human race.
Finally contemplate, in the depth of this same mirror,
the ineffable charity that He chose
to suffer on the tree of the Cross
and to die there the most shameful kind of death.
Therefore, that Mirror, suspended on the wood of the Cross,
warned those passing by
that here are things to be
considered, saying:
”All you who pass by the way,
look and see if there is any suffering like my suffering!”
”Let us respond to Him,” It says,
“crying out and lamenting,
in one voice,
in one spirit:
‘Remembering this over and over
leaves my soul sinking within me!’”

O Queen of our heavenly King, may you, therefore, be inflamed ever more strongly with the fire of love! As you further contemplate His ineffable delights, riches and perpetual honours, and, sighing, may you cry out from the great desire and love of your heart:

”Draw me after you,
let us run in the fragrance of your perfumes,a
O heavenly Spouse!
I will run and not tire,
until You bring me into the wine-cellar,
until Your left hand is under my head
and Your right hand will embrace me happily,
You will kiss me with the happiest kiss of Your mouth.”

Resting in this contemplation, may you remember your poor little mother, knowing that I have inscribed the happy memory of you indelibly on the tablets of my heart, holding you dearer than all others. What more?

“One evening a few days before her death, Clare began to speak to the Trinity and to say very softly other words to God many educated people would hardly understand.”[10]

St. Clare died in Assisi on the 11th of August 1253 after a life of devout poverty and perfect joy. Two years later, on the 26th of September 1255, she was canonised by Pope Alexander IV.

Light of the West

“The light of Assisi did not go out when Saint Francis died in 1226 but intensified in the person of Saint Clare. It was not just because she lived longer than he did[11] but rather because with the sun (Francis) eclipsed, the moon (Clare) shone so much more brightly over the town of Assisi. We must remember that Saint Clare was a noblewoman, who was inspired by the Holy Spirit to follow Saint Francis. His positive, fraternal, joyful vision of life and his simple desire to follow Christ and his Blessed Mother touched Saint Clare deeply.”[12]

“Perhaps because she lived an enclosed life, the light of Saint Clare became more intense. Her little convent became a heaven where the Blessed Eucharist reigned supreme and where like Saint Francis, she poured out her practical love on her sisters and the people of Assisi who brought her all their troubles. While her very own sister, Saint Agnes of Assisi, was sent out to begin several other convents of the Poor Ladies, Saint Clare lived her whole religious life in the convent of San Damiano.”[13] From Assisi she became the Light of the West that continues to circle the earth through the daily prayers of her Sisters – the Poor Clares.

[1] St Agnes was the daughter of King Ottokar of Bohemia (Today the Czech Republic). This made her a descendant of St Ludmila and St Wenceslaus. Agnes’ mother was Constance of Hungary, the sister of King Andrew II of Hungary. Therefore, St Agnes was a first cousin of St Elizabeth of Hungary. It is all a bit complicated but even the emperor Frederick II asked for her hand in marriage. She declined the invitation to become Empress of the Holy Roman Empire.

[2] Pope Gregory IX previously as Cardinal Hugolino had been responsible for religious life in the Church.

[4] The first letter of Lady Clare to Agnes is dated 1234. It uses very formal language out of respect for Agnes’ high status as a Princess. However, the second letter in 1235 is more familiar. The third letter is 1238. The fourth letter is 1253, the year St Clare died. We do not have any letters in reply from St Agnes of Prague to St Clare. St Agnes was beatified in 1874 by Pope Pius IX (who was a member of the Third Order of St Francis) and she was canonised by Saint Pope John Paul II on the 12th of November 1989 seven hundred years after her death. St Agnes was honored in 2011 nationally as the saint who freed the Czech Republic from Communism. Her convent today is a National Museum.

[6]  The scripture sources given for this quote are Matthew 12:50 and 2 Corinthians 11:2. But the language is resonant with St Francis’ Letter to the Faithful when it says: “They are spouses, brothers, and mothers of our Lord Jesus Christ. We are spouses when the faithful soul is joined by the Holy Spirit to our Lord Jesus Christ. We are brothers to Him when we do the will of the Father who is in heaven. We are mothers when we carry Him in our heart and body through a divine love and a pure and sincere conscience and give birth to Him through a holy activity which must shine as an example before others. O how glorious it is to have a holy and great Father in heaven! O how holy, consoling to have such a beautiful and wonderful Spouse! O how holy and how loving, gratifying, humbling, peace-giving, sweet, worthy of love, and, above all things, desirable: to have such a Brother and such a Son, our Lord Jesus Christ.”

[7] The idea of the virtues being the wedding garments of the kingdom of heaven is found in the works of St Athanasius. ( + 373 AD) He says that a virgin’s heavenly reward depends on their character and inner maturity which he describes in an imagery of clothing: “When you are clothed in the virtues like garments and like a cloak you have acquired the power of the Holy Spirit, then the king will see you and desire your beauty, because you are so clothed with the multicolored virtues” (Virginity 16) See: Kevin Douglas Hill. Athanasius and the Holy Spirit. Fortress Press Minneapolis 2016.  St Francis basically says the same thing in his Canticle of the Virtues.

[9] Fourth Letter of St Clare to St Agnes of Prague:

[12] Taken from webpage of the Secular Franciscan Order of Australia: FRANCISCAN, SAINTS The Life of St Clare of Assisi. “The Moon shone much more brightly” prepared as a kind of Preface to the Address of Pope Benedict XVI.

[13] Ibid, Webpage OFS Australia as above.