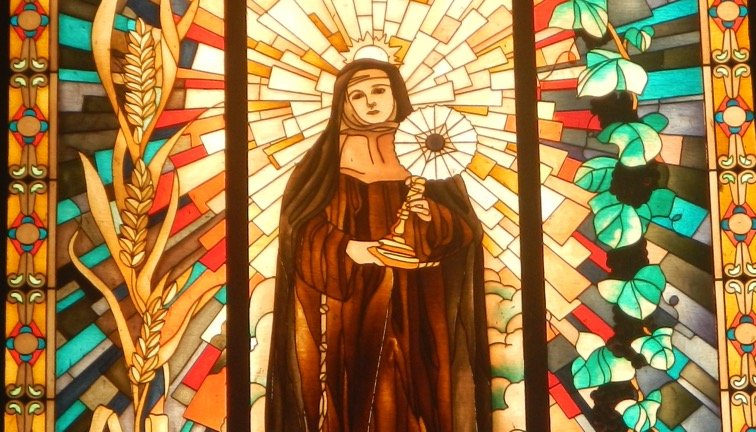 Sign of the Cross: One of the sisters, Benvenuta, had been suffering patiently and secretly for almost twelve years with an ulcer under her arm. When Clare found out about it, she made the sign of the cross over her and cured her instantly. A certain sister, Cristina, suffering for a long time from deafness in one ear, had used many medicines to try to cure that evil but it remained until Clare mercifully signed her head and touched her ear, immediately Cristina received back her full hearing. Clare also cured five other sisters of their physical illnesses in the same way by making the sign of the cross over them.

The friar with mental issues: Francis entrusted to her a certain Brother Stephen who was afflicted with madness. Clare made the sign of the cross over him and then permitted him to sleep for a while in the place where she was accustomed to spending time in prayer. After a short rest Br Stephen woke up free from his affliction and returned to Francis a mentally fit friar.

The little pebble: There is a story about a little three-year-old boy named Mattiolo from Spoleto, about 40 km from Assisi, who foolishly put a pebble up his nose that no one was able to remove. The child in great distress was brought to Clare who traced the sign of the cross on him, and the pebble was immediately expelled from his nose.

The boy who was blind in one eye: Another boy from Perugia was brought to Clare who had a sickness that completely covered his eye. Clare made the sign of the cross on his eye and then said, “Take him to my mother so that she may repeat the sign of the cross on his eye.” After Lady Ortolana blessed the boy, he was complete healed. Clare attributed the healing to her mother, but Ortolana then a sister in the convent praised her daughter and considered herself unworthy of such an event. [1]

The loaf of bread: One day Clare sent half a loaf of bread to the brothers and then ordered that the rest of the loaf be cut into fifty pieces for the sisters and lo and behold each sister received a slice of bread.[2]

The jar of oil: On one occasion the sisters had run out of oil, so Clare prepared an empty jar for oil and left it for the brother who went begging for them, but when he came to take the empty jar, it had already been mysteriously filled. This happened about two years after they came to live at San Damiano.

The heavy door: One day as Clare was opening a very heavy door[3] it came off its hinges and fell on top of her covering her completely and all the sisters in a great panic thought she had been crushed to death but when the door was lifted off her, she was discovered to be completely unharmed.[4]

The attack of the Saracens mercenaries: A famous miracle that occurred during the life of Lady Clare was when San Damiano and the town of Assisi were saved from the soldiers of Frederick II.[5] The Emperor spoke Arabic and employed Saracen mercenaries[6] in his army. In 1240 these troops attacked the town of Assisi and in particular the monastery of San Damiano which was outside the walls of the town. At this time Clare was very sick, but at the alarm of the sisters she rose from her bed and called for the chaplain to bring the small box[7] in which the Blessed Sacrament was kept.

There before the Eucharist she prayed for deliverance of the sisters. The Saracens had scaled the walls of the monastery and even went down into the enclosure. At this Clare threw herself in prayer on the ground before the Blessed Sacrament saying, “Lord look upon these servants of yours, because I cannot protect them.”

Then Sister Francesca heard a voice of wonderful sweetness say to Clare: “I will always defend you.” Clare then prayed for the city as well. The same voice said, “The city will endure many dangers, but it will be defended.” Suddenly the Saracens left the monastery in such a way that they did not do any harm or damage at all.

Saving the city of Assisi from a second attack:  Another attach on Assisi: About a year later[8] in 1241 the army of the emperor came back again this time led by Vitalis d’Aversa who declared he would not leave until he had taken Assisi. Again, Clare was told about this and said, “We have received many benefits from this city, and I know we should pray that God will protect it.” Confident of God’s power, Clare called all the sisters, and had them bring some ashes and covered her unveiled head with them and placed the ashes on the heads of all the sisters and commanded them to go pray so the Lord God would free the city. And so, it happened. They learned the next day that Vitalis had left by night with all his army and the people of Assisi rejoiced when they heard that the sisters had prayed for their deliverance.

The television of Christmas Mass: On the night of the Lord’s Nativity the other sisters had gone to the chapel for Matins and Clare was all alone, suddenly she was able to see the Mass in the Basilica of St Francis on the wall in front of her. So clear was this vision that the next day she could name the friars present at the celebration. Because of this miracle she has become the patron of Television.[9]

[2] The Lady. Introduction p. 27: “A document dated June 8, 1238, indicates that the monastery was filled with fifty sisters.” If nothing else, this shows the extraordinary influence of St Clare on the women around her.

[3] The Fourteenth Witness, Sister Angeluccia tells us that this door was very strongly built because it opened onto the piazza before the monastery. It was the main door of the Monastery. Traditionally such a door could only be unlocked from the inside. There is also a spiritual aspect which we find in Revelation 3:20 indicating that it cannot be opened from the outside, so even Jesus waits to be let in. Why did Lady Clare open this door? There is possibly more to this story than meets the eye at first glance. It took three friars to put the door back on its hinges. Ref: The Lady p.188 No 6.

[4] The 15th Witness Sr Balvina explained the story of the heavy door that fell on St Clare. When it was lifted St Clare said it was no heavier on her than a mantle (cloak).

[5] Frederick II (1194-1250) Emperor from 1220 to 1250. He spoke six languages including Arabic. A contemporary chronicler called him stupor mundi (the wonder of the world) Pope Gregory IX called him “The Antichrist.” He was baptized in the same font as St Clare in Assisi.

[6] There was a great deal of confusion among Christians about the difference between Saracens and Tartars. The Saracens were Moslems who followed the Islamic prophet Muhammad (570-632). The Tartars were Mongol tribesmen from China who were forged together into a nation by Genghis Khan (1158-1227). Note that Genghis and his sons who created the largest empire the world had ever seen by murderous wars and mayhem died one year after St Francis.

[7] The Lady. p. 174 The 9th Witness Sister Francesca, daughter of Sir Capitaneo of Col de Mezzo, tells us the Eucharist was in a small box. The images of St Clare holding a Monstrance are incorrect. The Ostensorium as they are also called were a later invention after the feast of Corpus Christi was instituted in 1264 for the universal church.

[10] The Fourth witness: When asked when the lady from Pisa came Sr Amata said that it was four or five years ago.