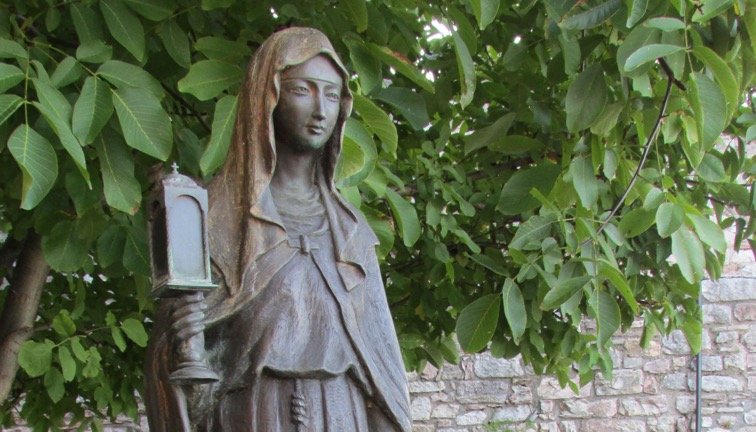 Life Inside the Convent

The period between 1212 and 1219[1] was a seminal time for Clare as she tried to apply Francis’ ideal of gospel fraternity to her new way of life.[2] This formative time ended in 1219 when they had the Benedictine rule imposed on them, and Clare was made an Abbess.

There is no indication that they were strictly enclosed, right from the beginning, but there is also no reason at all to believe that they went in and out of the convent freely doing works of charity, caring for lepers or begging like the friars. There is however one story of Clare and Francis having a meal together in the woods near the Portiuncula, where they were so totally wrapped up in holy conversation that such a light shone in the woods the people in Assisi and the surrounding places thought the forest had caught on fire.[3] It is a beautiful story that illustrates that Francis and Clare shared the same burning vision of Gospel life. Although she was most certainly later locked-down in the cloister by the Holy See, Clare’s heart was always attentive to what she heard Francis was saying, writing, and doing. Her prayers were ever supportive of the vision of gospel fraternity that the friars were showing to the world.

By the end of 1219 Pope Honorius III, issued separate papal decrees for each of the convents of “Poor Ladies” and imposed the Benedictine Rule on them all and with that Regular Observance. He did this no doubt at the recommendation of Cardinal Hugolino dei Conti di Segni, who had responsibility for all religious under the Holy See from 1216[4] and who became the special protector of the Franciscan order later in 1220,[5]

By then there were convents of Poor Ladies in Assisi, Florence, Perugia, Siena, and Lucca. The convent in Florence was previously Benedictine, but they asked to be able to follow the lifestyle of the Poor Ladies of San Damiano. These new convents caused a severe challenge to Clare because the only person she felt she could entrust this initiative to was her sister Agnes. Clare sent her beloved sister, whom she had personally schooled in her vision of Gospel life, to assist and establish these other convents. Agnes did not return to Clare’s side until thirty-three years later, when Clare was dying in 1253.

We do not get a closer look into life inside the Convent of San Damiano until Clare has died. The Pope  Alexander IV, wanted to canonise Lady Clare her at her funeral[6] but was told he could not do so because the facts about her life had not yet been gathered and reviewed. So instead, he used the Mass of Virgins for her funeral, virtually canonizing her despite not being able to declare her a saint. Then the Pope called for a gathering of the facts about her life. “The Acts of the Process of Canonization of Clare of Assisi” began on the 24th of November 1253. They revealed life inside the convent to the world. Unfortunately, just a few days before that Clare’s sister Saint Agnes had died depriving us of her testimony.[7]

The first witness for the Process was a long-time family friend, Sister Pacifica.[8] She tells us that Clare spent long vigils at night in prayer in the convent, even to lying on the ground, during these prayers; that when she did sleep she had a rock from the river for a pillow; Clare ate very little food; that she was so very strict with the food she ate that the sisters marveled how she could live. She fasted on Mondays, Wednesdays, and Fridays. Clare ate so little that later when she became very ill, Bishop Guido of Assisi and Francis commanded her under obedience to eat something each day.

In all twenty witnesses, about fifteen nuns of the convent and five lay people share their memories of Clare with us in “The Process of Canonization.” They tell us Clare esteemed holy poverty so much that even later, when Pope Gregory wanted to give her something or buy something for the convent that Clare thought unnecessary, she would never consent to accept it. We are told that the humility of Clare made her a servant to everyone.[9] On one occasion, as she was washing the feet of one of the serving sisters, the sister pulled her foot away in embarrassment and accidentally hit Clare in the mouth, but Clare took that foot again in her hands and kissed it more fervently for the love of Christ.

She was so careful in asking anyone to do something that she never asked anyone to do anything she herself had not already done many times before. Her love for the sisters was so great that she was always sensitive, kind, and loving towards each of them, and she had a special care of those sisters who were sick. Moreover, Clare would go around at night with water for the sisters who could not sleep and even cover them better if they were cold. If she found a sister with a worse tunic than herself, she would always ask for it, and wear the old one, and give the better one she had to the sister. (Truly acting as mother to the sisters….)

When it came to prayer, Clare first of all taught the sisters “to drive every noise away from the dwelling place of the mind so that they might be able to cling to the depths of God alone.”[10] She constantly encouraged them with such love and joy to seek always the inner life of the Holy Spirit.

Clare enjoyed greatly listening to sermons. “She knew what to take out of the sermons of any preacher that might be profitable to the soul.”[11] Once when Pope Gregory IX forbad the friars to go to the convent to preach without his permission, Clare sent all the brothers back to the Minister even those that were questors for bread. When Pope Gregory heard this, he relented and gave that decision back into the hands of the general minister. Lady Clare, it seems, knew how to make a point without saying a word.[12]

Clare’s love of Christ crucified drove her to do acts of severe penance. She had such compassion for Our Lord Jesus Christ that she wanted to suffer with him. To engage in this extreme penitential life, she once had a shirt made of a boar hide and wore it bristle-side-in under her woolen habit. Another sister asked to borrow it but very soon afterwards gave it back. Another time Clare had a shirt of knotted horsehair made to wear under her habit until she became ill and then the sisters took it away from her.

One Holy Thursday night, Clare shut herself in her room and became so absorbed in contemplation of the sufferings of her dear Lord Jesus that she remained out of her senses all that night and the whole of Good Friday. One of the sisters very close to her went to see her from time to time and found her caught up in this way. Finally, on Friday night the sister came with a lighted candle and made a signal to remind her of the command of Francis that she eat something each day. As if returning from another world Clare remarked that there was no need for a candle since the night had passed and it was morning, but the sister told her that a night and a day had passed, and it was night again. Clare said to her, “Be careful not to tell anyone about that vision while I am in the flesh.”[13]

It would seem that Clare did not identify herself directly with the crucified Christ as Francis did, but rather standing with the Blessed Mother at Calvary, she was filled with an enormous compassion for her suffering Lord. In the preface to “The Legend of Saint Clare” she is called “the footprint of the Mother of God, a new leader of women.”[14]

[1] By 1216 there were three Monasteries following St Clare and by the end of 1219 Pope Honorius III issued separate papal decrees for five monasteries of “Poor Ladies.” These convents were in Assisi, Florence, Perugia, Siena and Lucca. He imposed the Benedictine Rule on them all and Regular Observance. By 1238 there were about 50 monasteries following St Clare scattered in Italy, Spain, France, Germany and Bohemia.

[2] St Clare was looking for a Gospel way of life. They were a group of sisters who were seeking to be part of St Francis’ vision of gospel fraternity. Clare, taking her cue from her mother’s name describes herself as “the little plant of St Francis.” See Testament 37. Her way of life like that of the friars was more like a family. Francis said the Guardian of the Fraternity should be like a mother.

[4] Cardinal Hugolino, took over the responsibility of looking after all religious and new groups after Cardinal John of St Paul who died in 1215. When Pope Honorius III died Cardinal Hugolino became Pope on the 19th of March 1227. He did not die until 22nd of August 1241 So his influence on Francis and Clare is very important to remember.

[5] At the request of St Francis, himself, Hugolino was made “protector” of the Franciscan Order in 1220. Hugolino had studied at the universities of Paris and Bologna. Bologna is the oldest University in the world, founded 1088, it was renowned for Canon and Civil Law. The influence of Cardinal Hugolino on the 1223 Rule of St Francis for the friars is not only obvious but is stated by him in the 1238 Bull “Quo elongati.”

[8] Lady Pacifica was the daughter of Guelfuccio of Assisi. She was a neighbor and friend of Bl. Ortolana Clare’s mother. They had been on pilgrimage together.