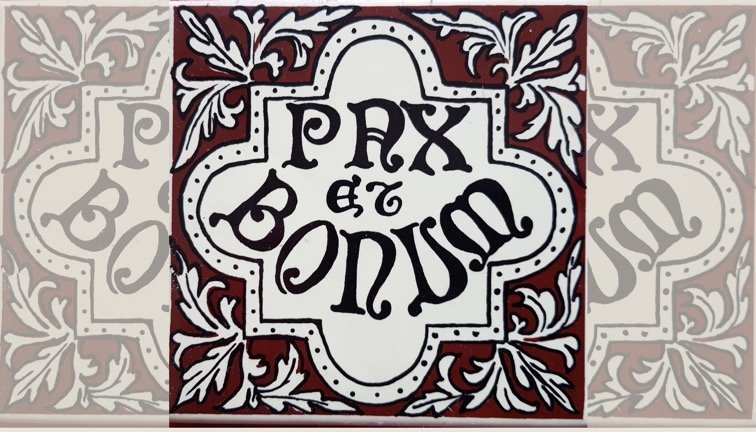 “So great the good I have in sight
That every pain I count delight!”[1]

The Secular Song of La Verna:

The words above are from a very secular song of a knight about his lady love. Saint Francis took up the lyrics of this song and transformed them into the beginning of a now long forgotten sermon, delivered before Count Orlando Catani of Chiusi della Verna. So effective was his preaching on that 8th of May 1213,[2] that Count Orlando gave Saint Francis the gift of the mountain of La Verna[3] as a place of contemplation.

In using these poetic words from a secular piece of music Francis shows us how much he was immersed in the medieval secular society of his day and how he used this to express his personal relationship with the crucified Christ. In the mouth of Saint Francis, these lyrics became mystical and ironic because it was at La Verna, eleven years later, in 1224, that he became one with his crucified Lord by the seal of the stigmata. 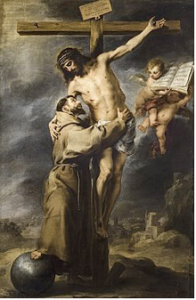 The Spanish artist Bartolomé Esteban Murillo painted this famous picture of Saint Francis embracing Christ on the cross for the Capuchin friars in Seville. The traditional understanding of the picture is that Saint Francis is renouncing all worldly goods by pushing the world away so he can embrace Christ more intimately. However, another interpretation says Saint Francis is stepping on the world to raise himself higher to embrace Christ more closely. Next to the cross are two cherubs holding a gospel book, opened at the gospel of Luke 14.33. The scripture says: “In the same way, those of you who do not give up everything you have cannot be my disciples.”

To Saint Francis, secular society was not an evil place of the “world, the devil, and the flesh”[4] but rather the whole world was a place redeemed by Christ but still in need of further evangelization. For the medieval monks heaven was inside the cloister of the monastery, with the world shut outside, but for the friars’ their cloister was not enclosed within a monastery’s walls. The early Franciscan vision encapsulated in the literary work called the Sacrum Commercium[5] tells us of the visit of Lady Poverty with the friars. Lady Poverty has a refreshing sleep on a stone that the friars gave her as a pillow. Lady Poverty, when she wakes up, asks the friars to show her their cloister. The friars take her to the top of a hill and show her all the world. Then they say: “This Lady is our cloister.”[6]  In that moment, the whole Franciscan family is declared “secular.” Their mission was to spread the gospel message to the entire world. Their focus was to claim this secular world for Christ. In Christ crucified, the victory was assured! This “Good News” needed to be preached to the far corners of the round earth.[7] The friars had defined their mission, just as the Secular Franciscan Order does today. We need to share the dynamic power of gospel fraternity – going from gospel to life, and life to gospel so that the world may become a kingdom of heaven on earth, a civilization of love and compassion.

Saint Francis was the son of a successful medieval cloth merchant from Assisi. The merchant class was a new middle class in society, and their focus was on wealth and prestige. Francis Bernadone, in his youth, wanted to have it all like the youth of every age. He wanted to become a troubadour, singing of love, a knight righting wrongs, a nobleman, living “the life,” and a hero for others to look up to and follow.

The opportunity for glory came when the town of Assisi went to war against Perugia. The Battle of Collestrada[8] was a horrific disaster. Francis was imprisoned in Perugia with the knights of Assisi. This was because his status as the son of a wealthy merchant indicated that his family might be able to ransom him. Although he came home ill and took a long time to recover, Francis did not easily give up seeking glory. He went to war a second time dressed in fine armour but returned to Assisi soon after because at Spoleto; he had a dream in which Jesus spoke to him, asking “Who do you wish to serve, the Lord or the servant?” [9]

The Holy Spirit is a Spirit of Joy:

Sometime after this, Francis encountered an elusive leper, followed by a vision of the Crucified Christ, and then the Lord spoke to him audibly from the San Damiano cross. “Francis, go repair my Church, which you see is falling into ruins!”

After that, he wasted no time and began to rebuild three small chapels, “brick by brick, stone by stone,”[10] begging in the streets for building materials. He had found Christ Crucified, and the wonder and joy of this shone brightly in his personality for all to see. This ridiculous and foolish joy made him love everyone, even lepers, despite the dangers to his health. This irrepressible joy radiating in his personality made him attractive to others. His ready smile, the sparkle in his eyes, his sense of humor, the irony of it all shouted, “I have a secret!” At Chiusi della Verna, he found the words to express it. He began with the words: “So great the good I have in sight, that every pain I count delight!”

[1] Joseph A. Amato. Victims and Values: A History and theory of Suffering. Contributions in Philosophy, Number 42, Greenwood Press, New York, 1990, p. 57. “St. Francis transformed a knight’s poetic lines to his lover, into a long sermon on religious life.” https://www.google.com.au/books/edition/Victims_and_Values/_UkTAzvHsyYC?hl=en&gbpv=1&dq=So+great+the+good+I+have+in+sight,+that+every+pain+I+count+delight.&pg=PA57&printsec=frontcover

[3] Count Orlando Catani (also known as Roland) received spiritual direction from St Francis and changed his way of life dramatically. It is said that he became a member of the Order of the “Brothers and Sisters of Penance” (The Third Order of St Francis) now called the Secular Franciscan Order. Servant of God, Orlando Catani was buried at La Verna.

[4] A medieval monastic attitude towards the secular world. Cf. Ephesians 2:1-3

[5] The Title of this allegory (a story with hidden meanings) Sacrum Commercium, is understood to be “a  sacred exchange ( a contract, an agreement, certainly a dialogue) between the friars and Lady Poverty.

[6] Campion Murray, O.F.M. “Reflections on the Holy Agreement” Second Edition 2001. Catholic Publication Centre NZ. p. 33. The text is from the Sacrum Commercium Chapter 6 “The Banquet with Lady Poverty” No 63.

[7] The ancient Greeks by about 500BC understood the earth to be round. Aristotle (384-322 BC) taught Alexander the Great that the earth was round and that if he went far enough, he would arrive back in Greece.

[8] This ferocious battle was fought in 1202. Francis was about 20 years old. Arnaldo Fortini writes: “the sight of those killed on the field where the fighting took place was horrifying beyond words…all [the fields] were covered with the dead. ‘How disfigured are the bodies on the field of battle, and how mutilated and broken the members.’ …Assisi was appalled by the massacre… A great many of Assisi were taken prisoner…. Among them was Francis….  That battle with all its raw ferocity and bloodthirsty pride, the sight of the dead, and the infinite grief made in Francis’s warm and generous spirit a wound so deep that time never healed it. …Anyone who lives through the soul-searing instant of madness when meeting an enemy knows the nightmare that comes later.” https://paceebene.org/collestrada

[9] The “servant” in this question was Count Walter III of Brienne, a nobleman from northern France. He married the Sicilian princess, Elvira. Walter led the Papal army down into Apulia to claim his wife’s kingdom of Sicily. He lost an eye to an arrow, but died later in 1204 when his camp was infiltrated, the ropes of his tent cut and he was stabbed to death. He never made it to Sicily.

[10] The song by Donovan, from the movie “Brother Sun and Sister Moon.” https://www.youtube.com/watch?v=ziXDtJgIe1I