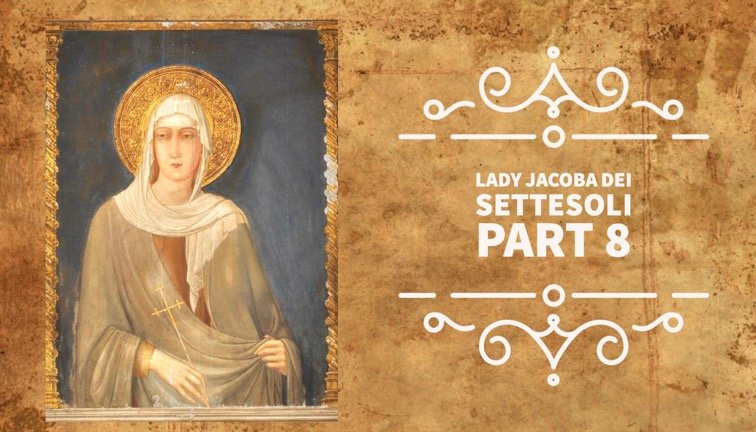 The Canons of the Fourth Lateran Council give us a particular window on the world of Lady Jacoba. The Eucharist becomes a focus of attention again Canon 19:“We do not wish to leave uncorrected the practice of certain clerics who convert the churches into storehouses for their own household goods and also for those of others, so that the churches have the appearance of the houses of lay people rather than of the house of God. There are also others who do not keep the churches clean, and also leave the vessels, vestments, palls, and corporals so unclean that sometimes they are a source of aversion. We strictly forbid that household goods be placed in the churches. We command also that the aforesaid churches, vessels, corporals, and vestments be kept clean and bright, for it is absurd to tolerate in sacred things a filthiness that is unbecoming even in profane things.”  “In all churches the Eucharist and Chrism[1] must be kept under lock and key.”

A summary of Canon 21 says: “Everyone who has attained the age of reason is bound to confess his sins at least once a year and to receive the Eucharist at least at Easter. A priest who reveals a sin confided to him in confession is to be deposed and relegated to a monastery for the remainder of his life.” Canon 22 reminds doctors to advise a sick person to call for a priest.

Canon 16 would certainly have caused a sensation in the fashion business. The canon gives warnings about clerical dress in detail and makes you wonder what priests were wearing at the time. The Text: “Clerics shall not hold secular offices or engage in secular and, above all, dishonest pursuits. They shall not attend the performances of mimics and buffoons, or theatrical representations. They shall not visit taverns except in case of necessity, namely, when on a journey. They are forbidden to play games of chance or be present at them. They must have a becoming crown and tonsure and apply themselves diligently to the study of the divine offices and other useful subjects. Their garments must be worn clasped at the top and neither too short nor too long. They are not to use red or green garments or curiously sewed together gloves, or beak-shaped shoes or gilded bridles, saddles, pectoral ornaments (for horses), spurs, or anything else indicative of superfluity. At the divine office in the church they are not to wear cappas[2] with long sleeves, and priests and dignitaries may not wear them elsewhere except in case of danger when circumstances should require a change of outer garments. Buckles may under no condition be worn, nor sashes having ornaments of gold or silver, nor rings, unless it be in keeping with the dignity of their office. All bishops must use in public and in the church outer garments made of linen, except those who are monks, in which case they must wear the habit of their order; in public they must not appear with open mantles, but these must be clasped either on the back of the neck or on the bosom.”

Was any of this of interest to Lady Jacoba? Well earlier on it was noted that her vast enterprises were bound up with merchandise and trading of goods. The canon gives us a look at the fashions of the time especially among the wealthy and that some priests were obviously keeping up with the times when it came to dress sense. Canon 17 really gets into scandalous matters among the clergy and shows us that we are not alone in our era in coping with the way some clergy behave: “It is a matter for regret that there are some minor clerics and even prelates who spend half of the night in banqueting and in unlawful gossip,[3] not to mention other abuses, and in giving the remainder to sleep. They are scarcely awakened by the diurnal[4] concerts of the birds. Then they hasten through matins in a hurried and careless manner. There are others who say mass scarcely four times a year and, what is worse, do not even attend mass, and when they are present they are engaged outside in conversation with lay people to escape the silence of the choir; so that, while they readily lend their ears to unbecoming talk, they regard with utter indifference things that are divine. These and all similar things, therefore, we absolutely forbid under penalty of suspension, and strictly command in virtue of obedience that they celebrate diligently and devoutly the diurnal and nocturnal offices so far as God gives them strength.”

Unlike previous Councils of the Church these Canons were published immediately. Pope Innocent III intended to reform the Church. He did not hide the challenges. As we are today, so too in Lady Jacoba’s time, people would have been shocked by the behaviour of the clergy, and perhaps surprised to see the Church speaking so directly about it. For some people, like today, it would have been a reason to give up the practice of their faith altogether. We might well ask the question here: Do we have any idea as to how Lady Jacoba may have responded to all this. In fact we need not look any further than Saint Francis’ response as we find it in his writings and especially his Testament. Let us remember that both Lady Jacoba and Lady Clare had their ear tuned     to his voice.

Saint Francis wrote: “The Lord gave me, and still gives me, such a faith in priests who live according to the rite of the holy Roman Church because of their orders that, were they to persecute me, I would still want to have recourse to them. And if I had as much wisdom as Solomon and found impoverished priests of this world, I would not preach in their parishes against their will. And I desire to respect, love and honour them and all others as my Lords. And I do not want to consider any sin in them because I discern the Son of God in them and they are my Lords and I act in this way because in this world, I see nothing corporeal of the most high Son of God except to his most holy body and blood which they receive and they alone administer to others.” [5] So we too, in our day, like Lady Clare and Lady Jacoba, need to read and remember the words of Saint Francis and take our attitude in these matters from him.

Indeed, reflecting the Council many of the Letters of Saint Francis speak directly with the voice of the Council when it comes to the Eucharist, but it would not be until 1222, with the papal decree Devotionis vestra that the friars were allowed to keep the Blessed Sacrament in their oratories. Two years later another papal bull, Quia populares tumultus promulgated on the 3rd of December 1224 granted the friars permission to celebrate the Eucharist in their churches and oratories. In his Letter to the Entire Order Saint Francis writing, most probably, to his second vicar Brother Elias, since his first vicar Brother Peter Catani had died in March 1221, speaks his mind on the Eucharist and the attitude he expects of the brothers who are priests of the Order, when they celebrate Mass. Would it not be a little surprising to realise that some friars, who are priests today, have not read this letter. We can be quite certain that Lady Clare and Lady Jacoba with their obedient ears and hungry hearts would have obtained a copy of it.

Probably the most controversial Canon was number 68, because it demanded Jews and Muslims wear special dress so as to mark them out from Christians so that they would not marry each other, by accident. “Thus it happens at times that through error Christians have relations with the women of Jews or Saracens, and Jews and Saracens with Christian women. Therefore, that they may not, under pretext of error of this sort, excuse themselves in the future for the excesses of such prohibited intercourse, we decree that such Jews and Saracens of both sexes in every Christian province and at all times shall be marked off in the eyes of the public from other peoples through the character of their dress.”

Canon 12 declared that all Religious Order are to follow way of the Cistercians of holding Chapters every three years. Even the Secular Franciscans follow this legislation still today. Canon 13 put the way of life of the Franciscans and the Dominicans as religious orders in jeopardy. “Lest too great a diversity of religious orders lead to grave confusion in the Church of God, we strictly forbid anyone in the future to found a new order, but whoever should wish to enter an order, let him choose one already approved.”This legislation would have Saint Francis and Saint Dominic turning to Cardinal Hugolino for assistance, so it is possible that Saint Dominic and Saint Francis met in Rome more than just one time at the Lateran Council.

[1] Chrism is one of the three Holy oils blessed at Easter by the bishop. He blesses the Oil of Catechumens and the Oil for the Sick and Dying. The Oil of Chrism is consecrated; it is used for anointing at baptism, confirmation, ordination and it was used at coronations.

[3] Unlawful gossip: Calumny: Telling lies about someone to destroy their reputation. Passed on through Gossip it continues to do damage. Also Detraction: Telling the truth, about the misdeeds of others, so as to destroy their character is also sinful, because everyone has the right to a good reputation.

[4] Diurnal birds are active during the day and usually wakeup early. Birds awake at night are called nocturnal.