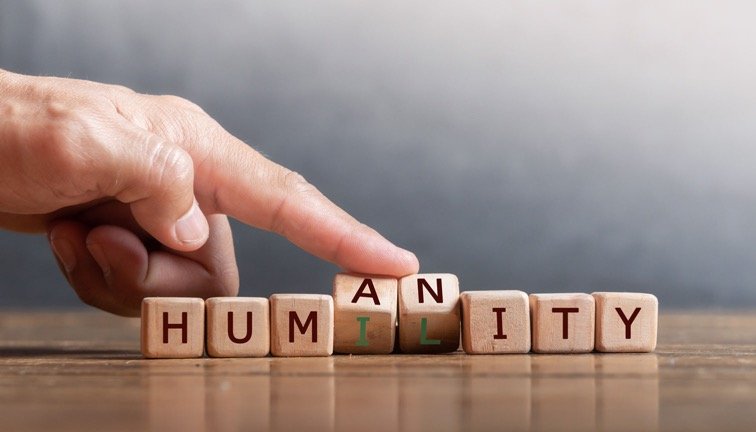 So then, what is this “Way of Humility”?  First of all, it has nothing to do with shyness, which rather than a virtue is largely an ego-driven fear of what other people will think of us, which results in the person becoming scared of doing or saying what he or she wants to, out of fear of negative reactions, criticism, or rejection, and simply opting to avoid social situations instead – or just to save face. The chronically shy often try to make shyness a virtue. It is not. It’s a deficit that needs to be overcome – gently and firmly. It usually disappears with experience and the gaining of confidence.

Humility is essentially honesty. It’s about knowing your weaknesses and your strengths. It’s the 4th Step in the Alcoholics Anonymous Program: To make a searching and fearless moral inventory of ourselves. It’s about recognizing and being grateful for the graces that God gives us to do all the things we can do. St. Bernard defines it as, “A virtue by which a person knowing themself as they truly are abases themself. Jesus Christ is the ultimate definition of Humility.”  As St Paul says in his Letter to the Philippians, (2:6) “His state was divine, yet he did not cling to his equality with God, but emptied himself to assume the condition of a slave,…”

Humility is a lack of arrogance, not a lack of aggressiveness or zeal in the pursuit of achievement. We do need to focus; we need to prioritize what we have to do. But in the end the way of humility is all about love and respect for others not trying to push them about or use them like a tool to achieve an end. People are not just instruments to get the job done, but rather they are the job to be done – it is their transformation that will make the difference.

However, what Jesus teaches us is, that even when the way of humility is not followed and  where the leaders do not do their homework and are ignorant, and really stuff it up, the way of St Francis, that we call “perfect joy” can save the situation, and the spirit of fraternity can still find a way to set a glorious example. That is what makes saints and heroes; they offer it up and press on! That is what happened at Gallipoli, our troops were used by the British military superiors to get a job done, and badly done indeed, by incompetent leaders. But, out of that sacrifice, that terrible loss of life, out of that furnace of destruction, our Australian sense of fraternity and mate-ship roared into life and became part of our national culture. Looking out for each other has become the best part of what it is to be Australian and at its core it is humble, honest and directly to the point. Honesty is the essence of friendship.

For us, as Franciscans then, those who achieve the most should need to brag the least. The more secure they are in themselves, the more humble they should be. “True merit is like a river, the deeper it is, the less noise it makes”.[1] The humble leader is always ready to step down to the level of others and assist them. We must accept that as we assist others to find their way and grow in competence and efficiency they may follow the world and the devil and become over confident, boastful and conceited, but they may also truly discover in our style of ministry the way of humble service so that they too can teach and lead others. They may in fact discover the layers of our own talents as teachers and leaders without us having to boast about them, and if they do, they will recognize with gratitude the humble way they were helped and become great leaders themselves.

Humility is not only found in leaders. It is also found in the understated humility of everyday people we work with, who have the ability to get the job completed without drawing attention to themselves.  So often this is achieved by their readiness to put in extra hours just to get the job done and done well. This is akin to the philanthropist who gives an anonymous donation. It is also the concept behind what has been called the Magnificent Obsession.[2] (Matthew 6:1-4)

Strangely enough there was an article published May 21, 2013 in The Good Oil by Sr Clare Condon SGS titled “The Power of Servant Leadership”. [3] It is, as they say “right on the button” which originally meant in boxing a direct hit to the chin, a knockout punch. Sr Clare recaps much of what I want to say and asks us:

Is there a particular style of leadership suited to the mission of God within the Christian context? All of us can easily understand the ‘Great Person Theory’ of leadership. We can name examples like Nelson Mandela.

There are others who believe leadership is defined by certain traits. Some traits are acceptable, some not. Others assume that leadership depends on the situation or the environment. There are styles of leadership that are autocratic, managerial, relational or participatory. On reflection, we can probably identify all of these various styles in our political, social, religious and business contexts today.

However, for the mission of God as portrayed for us by Jesus in the Gospels, we need a different type of leadership. We need what is called “servant leadership.” The perennial example is Jesus washing the feet of his disciples… In the Jewish culture of the time, it was the slave, the person of lowest rank who washed the feet of others. Disciples washed the feet of the master. This act of Jesus was a complete reversal of that social and cultural structure and how leadership was exercised in his time. He even went a step further by identifying his disciples as being in a relationship of friendship with him. In our own time we have the recent example of Pope Francis washing the feet of juvenile prisoners.

Shockingly enough I agree with Sr Clare. A Franciscan could hardly argue with someone with a name like Clare particularly when she is on target. So I must return to her article in my final Monthly Spiritual Message for August: …The Way of Humility Part 3.

[2] Magnificent Obsession is a 1929 novel by Lloyd C. Douglas. It was one of four of his books that were eventually made into blockbuster motion pictures, the other three being The Robe, White Banners and The Big Fisherman. According to the book, Magnificent Obsession was the literal practice of doing good deeds secretly, and thereby reaping spiritual power to use in becoming a truly excellent person. The philosophy behind the book is also partly that of “pay it forward”, the idea that good deeds received are not to be paid back to the doer of the deed, but to a needing person in the future.