Francis A Man Of Suffering And Forgiveness 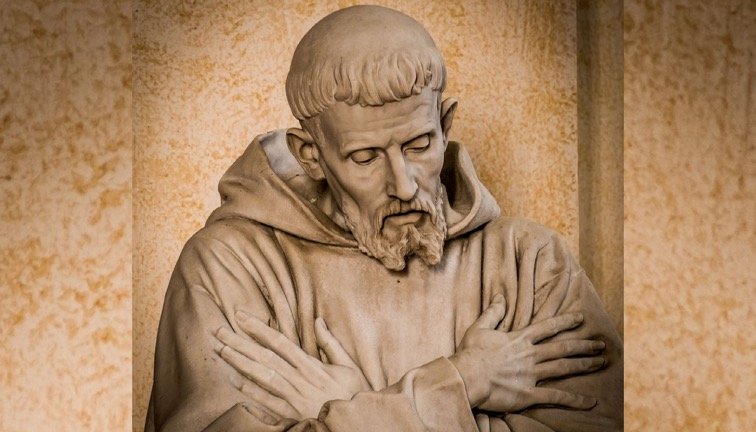 In this reflection I would like to focus on an area that is rarely mentioned in the biographies on St Francis of Assisi. The area of interest is the relationship between Francis and his parents, in particular his father. At the moment of his “…giving back the goods and the clothes he was wearing to his father… I have called Peter Bernardone my father… I can advance naked before the Lord, saying in truth no longer: my father Peter Bernardone, but our Father who art in heaven…” (Englebert, pp.75-78). As read these words we become aware of a dilemma here that is at the heart of how Francis became a man of suffering and of forgiveness. Let us explore this “rare pearl” hidden within the life of St Francis.

As we read about Francis we see a number of dynamics taking place within his life. First, there is the call from the Crucified One at San Damiano Chapel, this seems to be the ‘coreelement’ in his conversion experience that would change Francis inwardly first, then, would manifest itself outwardly in different ways. The second dynamic is that the combination of the call and hearing the words, “Do you not see, Francis, that my house is crumbling? Go, then, and repair it for me.” (Manselli, p.54.)  The third dynamic is Francis’ deep desire to become like his Crucified Lord which sets in motion a deep intense spiritual suffering in his heart. This intense suffering to become like his Crucified Lord was a necessary step to his conversion, since it required Francis to be completely stripped of all relationships, in order to enter into the sufferings of Jesus. This combination of call and suffering in Francis allows him to gradually see and recognize what he must do. Although, he does not always see how he is to interact with the call from the Lord. He acknowledges his present sinful life as he mentions in his Testament, “The Lord granted to me, Brother Francis, thus to begin to do penance, for whilst I was in sin, it seemed too bitter for me to see lepers.” (Testament, Francis of Assisi, Early Documents, p.124.)

Let us look at the dynamics of his relationship with his parents. His parents loved Francis and gave him all that he needed. It might be seen as selfish that Francis took advantage and flaunted his parent’s generosity. In this muddle of behaviour Francis was both seen and capable of being a good business man in his father’s shop. Yet in the depth of Francis’ heart there lay a blooming movement of grace to leave “his present form of living” and to “passover” to a life with Christ alone. All these dynamics were to culminate in Francis’ leaving his parental home, inheritance and security for Christ’s sake.

Manselli reminds us about the intense pain that Francis must have experienced in his heart in parting with his parents and how this pain and parting, strengthened his conversion. Let us note that from this intense pain, the Lord drew out a greater good in the heart of Francis who was able to forgive his father, for all that occurred prior to and after his conversion. Manselli points out that “…the saint’s religious severity…”included that painful parting in order for Francis to walk completely stripped and freely towards Christ. In addition to walking freely, there will be that an on- going pain that he will experience because of his deep desire to enter into Christ’s suffering and the abandonment his father would experienced through his son’s behaviour.  Manselli continues, “The Crucifix at San Damiano made Francis aware of the suffering of Christ as a superhuman value in the reality of human existence…The saint’s religious severity had its origin in his insight into the meaning of the crucifix of Christ. Its theological meaning was not what impressed him, but rather its power of example for each individual and for all who wanted truly call themselves Christian.” (Manselli, p.55)

Manselli’s words give us an indication that Francis knew what he had to do in order to crossover to a life that would lead him to become more like his Lord. Francis also knew what he was going to do to help to rebuild this chapel. What we can see in Manselli, what Francis is about to do in order to actuate this painful parting and freely respond to that call by Christ to enter into his suffering. Francis in mind and is now prepared to enter into Christ’s suffering.

What happens next? We find Francis going into hiding. There in that place of darkness he ponders on his actions and acknowledges and has to face his father’s wrath in order to do what is in his heart. At the bishop’s palace father and son meet each other. When the bishop reminds Francis of what he has done, Francis acknowledges his wrong doing. Here in this place Francis gives everything back to his father. And the fact that he now removes himself from the Bernardone family causes Francis intense pain and he also understands his father’s predicament and embarrassment. He does not try to correct the situation but instead makes the break complete. From here on Francis is free to tread the royal road of the Cross. This seemingly harsh response that Francis has accepted from Christ will bring with it much more internal spiritual pain. In order for Francis to become ‘conformed’ to the reality of what this image of Christ Crucified means he must suffer deeply through the imprinted wounds of Christ’s Passion in the depths of his heart.

Raoul Manselli reminds us that, “The reality of Francis’ conversion fell in this way within the context and sphere of the suffering Christ…It became an effective sign for all those who, like Francis himself, wanted to abandon their sinful way of life in order to join themselves to Christ and in Christ. His conversion acted as a sign as well for those who were not on the cross but who still suffered from misery, pain, rejection and abandonment.” (Manselli, p.55.)

PrevPreviousPeace Is Born Of A New Heart
NextA grain of wheatNext