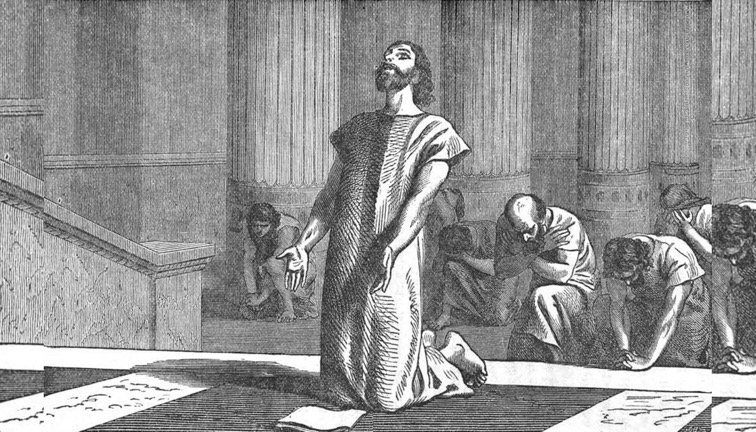 The ancient Order of Penance arose from a public process by which excommunicated people were reconciled with the Church community. St Paul described situations where a person might be removed from the community (1 Cor 5:11-13), but this was also balanced against Christ’s call of mercy and forgiveness.

Through the experience of disputes and conflict within Church communities, the early Church Councils set out procedures by which “mortal” sinners could be returned to the congregation. The Council of Nicaea (325AD) outlined the processes for different sins:

Those, therefore among the faithful those who are genuinely repentant shall spend three years among the hearers, for seven years are to be prostrators, and for two years they shall take part with the people in the prayers, though not in the offering. Nicea, Canon 11.

[For who engaged in violence] such persons shall spend ten years as prostrators after three years as hearers. In each case, however, their disposition and the nature of their penitence should be examined. Those who show through their fear and tears and perseverance and good works give evidence of their conversion by deeds and not by outward show, when they have completed their appointed term as hearers, may properly take part in the prayers, and the bishop is competent to decide even more favourably in their regard. Nicea, Canon 12.

Hearers were people required to stand apart from the community, at the door of the church, so that they could listen to the liturgy of the word. Prostrators were people who could come into the church building to listen to the liturgy of the word, praying with the catechumens but were required to leave with them before the consecration. Sometimes penitents were asked to publicly confess their sins before all who came to worship.

The regional Council of Toledo (589AD) required the bishop to lay his hands on a penitent before they could return to the congregation. A bishop would meet with penitents on Ash Wednesday to discuss their penance. During Lent they would be given a public penance to perform. On Easter Thursday, if they had completed their penance, they would be welcomed and embraced by the bishop, representing the acceptance of the person back into the Church. They could then participate in the Eucharist at Easter. As dioceses grew the function of the bishop was delegated to the parish priest. Even today a priest needs permission from the local bishop to celebrate the sacrament, which reconciles the sinner with God and the Church.

The nature of Penance was public. People clearly saw who the penitents were: they dressed differently; sometimes in ash cloth; they often had their head shaven; they stood apart in church; they performed public acts of charity; they were banned from carrying weapons nor were they able to leave the community except with permission of their confessor. They might be directed to go through the trial of a pilgrimage or a crusade.

The lives of these penitents seeking redemption inspired others. As the process could take years, the penitents required faith and commitment to rejoin the community. Before Francis, many groups adopted penitential practices as a devotional way of life: experiencing and sharing God’s mercy. They would stand with the penitents as a sign of compassion and support.

Our modern-day expression of the Sacrament of Reconciliation and Penance evolved from this early tradition and from the more personal and private spiritual practice stemming from the eastern and Irish practices of spiritual direction and the search for holiness. Another development was the use of Penitential guides, which formalized public and private penances. As the theology of grace and the seal of confession developed the celebration of the sacrament became more private: the satisfaction for sins evolved from the public penance of the early Church, to doing private penance from the medieval period, to the confession of sins themselves in the modern period. Through an act of satisfaction, contrition is shown, and absolution can then be proclaimed and reconciliation celebrated.

The ancient practice of Penance and the more private tradition existed alongside each other. In Spain and France, public penance remained the most common expression of the sacrament. The theology of the sacraments slowly evolved the seven sacraments, and their form was defined more clearly by the Church from the Lateran IV Council (1215) onwards. From this period, the Sacrament of Penance increasingly became seen as a private rite necessary for all sins. The renewal of liturgy after Vatican II saw the Sacrament of Penance and Reconciliation, moving away from being seen as an individual act but one in which a person was reconciled both to God and to the Church. To this end, the communal second rite of reconciliation was introduced.

What does this mean for Secular Franciscans: the heirs of those who adopted the ancient form of reconciliation as a life of devotion?

Penance, both spiritual and sacramental, in St Francis of Assisi’s time was still a very public act, not the private expression we have today. People were required to complete their penance before absolution was celebrated. To be a penitent, seeking reconciliation after a serious sin, was to be involved in a very public process. People knew who the penitents were and the journey they were on. Others walked with them or adopted their way of life as a devotion. These devotional penitents saw themselves as walking in the footsteps of Christ, taking on the sins of others.

Secular Franciscans often find it difficult to celebrate their vocation publicly. The admonitions of Christ and St Francis call for humility, rejecting attention-seeking through prayer and almsgiving. How do we publicly celebrate that we are penitents? The early penitential groups perhaps show us the way: Out of compassion and love they were willing to stand with the outcast and journey with them. The early Franciscan movement actively prayed and worked for peace and reconciliation.

The Constitution of the OFS, particularly Article 13, points to how the penitent life is to be lived today. There is a call to a life “in the spirit of continuous conversion.” (Art 13.1) There is a direction, which I think maybe unique to Secular Franciscans, encouraging participation in the “communal celebration” of the Sacrament of Reconciliation (Art 13.1) as a fraternity or with the People of God. Traditional penitential practice of fasting and abstinence “should be known, appreciated and lived out according to the general guidelines of the Church.” (Art 13.3). The Stations of the Cross are a good example of the celebration of the penitential side of Franciscan spirituality.

We cannot earn God’s love and mercy through penitential actions. The penitential practices are celebrated so that one can recognize that God’s grace, love, and mercy are always present when we turn back to God. Penitential practices open our hearts to be compassionate to those that struggle through life: the poor and the outcast. We are called to follow in the footsteps of Christ into the Passion, and like Christ, not just for ourselves but for others. We are hoping for the reconciliation of all things in Christ.

To be an Order of Penitents is to be a community that is ‘sacramental’. Our fraternities are called to be public signs of God’s call to mercy and grace. They are a public activity in the service of the Church’s mission, not a private devotional group. The origins of the Franciscans remind us to be public penitents, confessing our faith through self-less service of others through prayer and charity, embodying God’s mercy.