A Reflection on the Angelus Prayer – Part Two 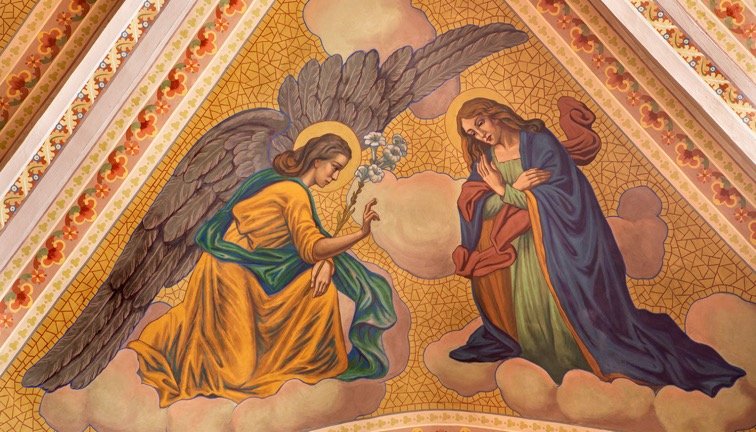 Let us look at this verse of the Prayer, “Behold the handmaid of the Lord, let it be done unto me according to thy word.” What is happening here? Mary is perhaps at prayer or sitting quietly when Gabriele appears to her. He announces the message that the Lord God gave him for Mary. Mary is completely surprised, a little afraid and overwhelmed at what is happening. Gabriel waits. Mary hears many things said to her that the Lord God would do for her through the power of the Holy Spirit.

After pondering on Gabriele’s announcement Mary replies “Behold the handmaid of the Lord, be it done unto according to thy word.” One of the many things that Mary heard was of deep encouragement to her, it was that her kinswoman Elizabeth who conceived and was in her sixth month. Mary is excited as she both hears and interacts with great joy to what Gabriele tells her. This announcement deepened Mary’s love for God and enabled Mary to make her great act of faith with evermore commitment, “Let what you have said be done unto me according to thy word.” These are the words that angels and all of humanity were waiting to hear. We read in a homily by St. Proclus of Constantinople, “…let the heavens rejoice from above, and let the clouds rain down justice, because the Lord has had pity on his people.’ Let the heavens rejoice from above, for when they were being created in the beginning, Adam too was formed by the Creator from the virgin soil, and appeared as the friend and intimate of God. Let the heavens rejoice from above for the earth has now been sanctified by the Incarnation of our Lord in the flesh, and mankind has been freed from the sacrifices of idolatry. Let the clouds pour down justice, because today Eve’s fault has been taken away and forgiven by the Virgin Mary’s purity and by him who was born of her, he who is at the same time God and man. Today Adam, after the ancient condemnation, was freed from the dread sentence of night.” (Vol. III Breviary.pp.527-8.)

The Lord God gave Mary a companion in Elizabeth who also found favour with the Lord, for a child. Mary goes to visit Elizabeth they combine their joy at the gift of a maternity that was a direct gift from the Lord God. Elizabeth extols the Lord God for what was accomplished in her and would agree with Gabriele’s message “…that nothing is impossible for God…” Elizabeth and Mary are two models who implicitly put their faith in God and received from Him all that they asked for but not for themselves alone, but for us and for our salvation. For Mary and Elizabeth brought forth through their great acts of faith their sons, Mary, gave us Jesus our Saviour, Elizabeth gave us John the Baptist, who baptised Jesus. Jesus spoke of John as being,”…the greatest of all prophets…” Jesus leads us in our salvation and John beckons us with the Apostles to these words they heard”…This is my beloved Son in whom I am well pleased. My favour rests on him…” We too are called to storm heaven with our acts of faith, hope, love and trust in our Loving Father who hears all that we raise before Him through the Holy name of Jesus. We will receive all that we ask from God and will demonstrate in our lives the fruits of our faith in God in our days and continue the same prayer of exaltation, “For nothing is impossible to God.”

Once again we reiterate the Franciscan viewpoint, that the Incarnation was too great a gift, a work on God’s part to have been conditioned by sin alone. St. Bonaventure would write about Mary’s perfection, “Mary is that being which God cannot make greater. He can make a greater earth with a greater heaven but not a greater Mother.” And, in our own time, the late Cardinal Suenens says, “If the Incarnation lies at the heart of God’s creative action, it is Mary who makes the Incarnation possible and therein lies her incomparable greatness…” (These quotations are from, A Scientist Researches Mary The Ark of the Covenant, “Mary and Creation the Story” The 101 Foundation, USA, Asbury, New Jersey, By Pro. Courtenay Bartholomew M.D. pp. 31-2.)