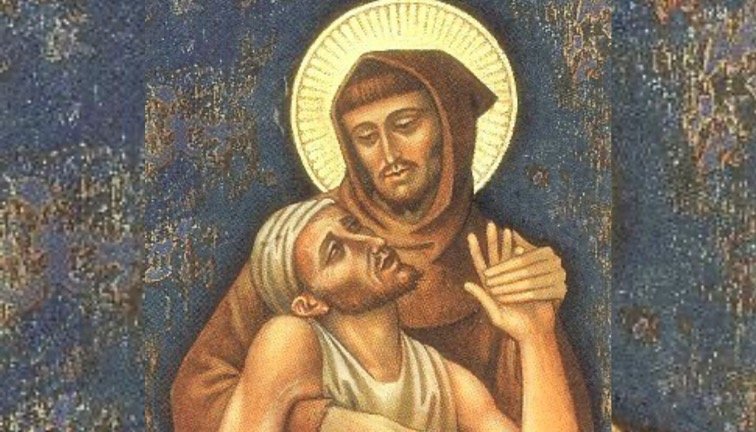 From the time of his conversion, Saint Francis sought to live every encounter with others as a meeting with Christ. It was also an opportunity to bring Christ to that person.

Saint Francis learned this from “The Elusive Leper,”[1] who confronted him on the plain below Assisi. On this occasion, Francis had to overcome his natural sense of nausea at seeing the leper. Nevertheless, by divine grace, he got down from his horse, gave the leper some money, and then impulsively embraced him. This was contrary to all Francis’ personal sensibilities. It was something he remembered all his life. So much so that when he wrote his Testament, at the very end of his life, it was this experience that he speaks of first, despite him having so many extraordinary visions.

Francis tells us that this experience had a profound effect upon him, “what had seemed bitter to me turned into sweetness of soul and body.”[2]  Francis had discovered a truth: the poorest; the most miserable; the dying are all our brothers and sisters in need of our most tender care and respect. Saint Francis found “fraternity” not only in high places, but also in the gutter of life where our brothers and sisters are discarded by society, where only death on a cross redeems human suffering and gives it a divine value.

To this end, we read about Francis being patient, kind, gentle, and understanding with the most challenging leper that the other friars could not help because of this man’s anger at being sick and his nasty attitude towards those who tried to help him. Let me provide you with the entire text since many will not have access to this wonderful story about Saint Francis.

HOW SAINT FRANCIS CURED A MAN WITH LEPROSY OF SOUL AND BODY
AND WHAT THE SOUL SAID TO HIM WHILE GOING TO HEAVEN.[3]

Saint Francis, the true disciple of Christ, while living in this miserable life, always strove with all his strength to follow Christ, the perfect teacher. Therefore, it often happened by divine action, that those whose bodies he healed were healed in soul by God at the same time, as we read of Christ.

Not only did he willingly serve the lepers himself, but besides this he set down that the brothers of his Order, while staying or travelling through the world, should serve the lepers for love of Christ, who wished for our sake to be considered a leper.

It once happened that at a place where Saint Francis was staying at that time the brothers were serving sick lepers in a hospital. One of the lepers there was so impatient, so unbearable and obstinate that everyone believed as certain that he was possessed by the demon, and so he was. He so rudely insulted anyone who served him with words and blows and, what is worse, he hurled such angry blasphemies against the blessed Christ and his most holy Mother, the Virgin Mary, that no one at all could be found who could or would serve him.

Although the brothers strove to bear patiently the insults and harm to themselves, in order to increase the merit of patience, nevertheless their consciences could not bear those against Christ and His Mother, so they decided to abandon that leper entirely. But they did not want to do this until they explained this in detail to Saint Francis, who was then staying in a place near there.

After they explained this, Saint Francis went to that perverse leper and, coming up to him, greeted him, saying: “My dear brother, may God give you peace.” The leper responded: “What peace can I have from God? He has taken from me peace and every good thing and has made me all decayed and stinking!” Saint Francis said: “My son, be patient, because the illnesses of the body are given to us by God in this world for salvation of the soul, so they have great value, when they are borne patiently.”

The sick man replied: “How can I patiently bear the constant pain that torments me night and day? And I am suffering not only from my illness, but the brothers you gave me to serve me make me worse, and don’t serve me as they should.”

Then by revelation Saint Francis knew that this leper was possessed by an evil spirit, so he went and placed himself in prayer, and prayed to God devoutly for him.

After his prayer, he returned to him and said: “My son, I want to serve you myself, since you are not content with the others.” The sick man said: “I like that. But what more can you do than the others?” Saint Francis answered: “I’ll do whatever you want.” The leper said: “I want you to wash me all over. I stink so bad I can’t stand myself.”

Then Saint Francis quickly had some water heated with many fragrant herbs. He undressed the man, and began to wash him with his holy hands, while another brother poured the water. By a divine miracle, where Saint Francis touched him with his holy hands the leprosy went away, and there remained only perfectly healed flesh. And as the flesh began to heal, the soul also began to heal. When the leper saw himself being cured, he began to feel great compunction and repentance for his sins and began to weep very bitterly. So, while externally the body was being cleansed of leprosy by washing with water, so internally his soul was being cleansed of sin by contrition and tears

Completely healed in both body and soul, he humbly accused himself of his fault and said, weeping out loud, “Woe to me! I’m worthy of hell for the injuries and insults I said and did to the brothers, for my impatience and blasphemies against God.” For fifteen days he persevered in bitter weeping for his sins and asking mercy from God and made a full confession to the priest.

Saint Francis, seeing such an evident miracle, which God had performed through his hands, thanked God and then left from there, going to a faraway country, because through humility he wished to flee all glory, and in all his actions he sought only the honor and glory of God, not his own.

Then, as it pleased God, that leper who had been cured in body and soul, after fifteen days of penance, became ill with another illness. Armed with the sacraments of the Church, he died a holy death. And his soul, going to Paradise, appeared in the air to Saint Francis, who was praying in the woods, and said to him: “Do you recognize me?” “Who are you?” Saint Francis said. “I am the leper the blessed Christ cured through your merits, and today I am going to eternal life, and I give thanks to God and to you. Blessed be your soul and your body; and blessed be your holy words and actions, because through you many souls will be saved in the world. Know that there is never a day when the holy angels and the other saints do not thank God for the holy fruit that you and your Order produce in different parts of the world; and be comforted and thank God and remain with His blessing.” Having said these words, he went to heaven, and Saint Francis remained greatly consoled. To the praise of Jesus Christ, and the little poor man Francis. Amen.

Saint Francis learned from Our Lord Jesus himself that “HAPPINESS COMES FROM SERVICE.” It is through service to others that we overcome ourselves and learn how to reach out to our brothers and sisters and thereby make our vision of “fraternity” authentic.

[1] It is 2 Celano 9 that tells us of the “Elusive Leper” so nicknamed by Franciscan Scholars. “But when the leper put out his hand as though to receive something. He received money along with a kiss. And immediately mounting his horse, Francis looked here and there about him; but although the plain lay open and clear on all sides, there were no obstacles about, he could not see the leper anywhere.”