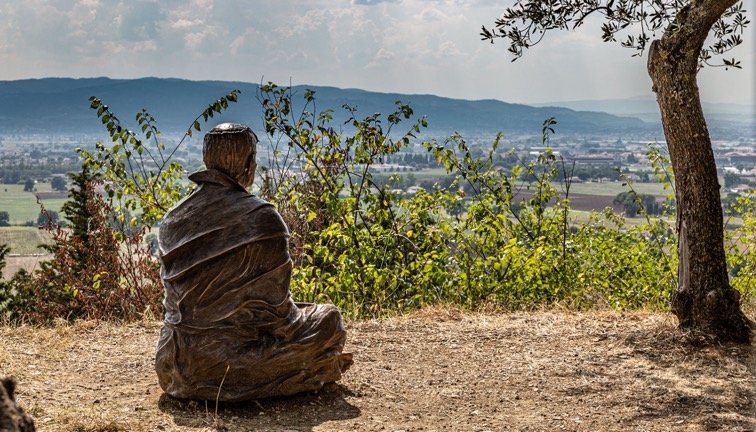 What, then, could we say are the characteristics of Francis’ prayer? First of all, it is not so much when, where or how he prayed that concerns us, but rather what were the things that reveal something about his personality: his style of prayer, his creativity, spontaneity and freedom in expressing his prayers. We can see the simplicity in the stories told in the Fioretti (The Little Flowers of St Francis): his description of “Perfect Joy” stands out as an example of humility and acceptance. When Francis meditated he would often be filled with emotion and sing in French, take branches and play them like a violin on his arm. He often ended up in tears in his contemplating the Passion of Christ.

There is always a poetry and joy about Francis’ prayer. He praises God using poetic images, and often sings in praise of God. That is why he insisted on his friars singing the Divine Office if it were possible. It was because of this that the early friars had a great influence on the liturgical music of their time.

Another central element of Francis’ prayer was his deep devotion to the Blessed Eucharist. In all his writings this comes out very clearly. His first Admonition is centred on the Eucharist, and this plays a large role in his spirituality. Wherever he prayed, whether it was at home in the friary, or amongst the people, or in caves or in the forest, he preferred to pray in small abandoned churches and to adore Jesus in the Eucharist using the words so many are familiar with today: “We adoreyou, Lord Jesus Christ, here and in all your churches throughout the world and we bless you because by your holy cross you have redeemed the world.” Always we find Francis full of wonder and admiration before the Eucharist.

Francis also placed great importance on his dialogue with God. In his conversation with God, if he became distracted he would confess it immediately in humility. The story that we read in 2 Celano: “One Lent, [Francis] had been making a small cup, so as not to waste any spare time. But one day when he was devoutly saying tierce, his eyes casually fell on the cup and he began to look at it, and he felt his inner self was being hindered in its devotion. He grieved that the cry of his heart to the divine ears had been interrupted and when tierce ended he said so the brothers could hear: ‘Alas that such a trifle had such power over me as to bend my soul to itself! I will sacrifice it to the Lord whose sacrifice it had interrupted!’ Saying this he grabbed the cup and burned it in the fire. ‘Let us be ashamed,’ he said, ‘ to be seized by petty distractions when we are speaking with the Great King at the time of prayer.’ “

Francis’ prayer was centred on Christ. Christ is the Word made Flesh. Christ cannot be separated from the Blessed Trinity. Christ is the Word-Creator. “To enter the mystery of Christ through prayer…is to enter the mystery of the Trinity, and to live in the Trinity is to live in relationship of love. Because Franciscan prayer is focussed on the person of Christ, it is affective. It is prayer of the heart rather than the head, and seeks to centre one’s heart in God. The heart that is centred in God views the world as the place where God dwells.”

Francis did not recite many prayers because in a deep relationship with God. He became a prayer, an expression of intimacy with God and ultimately must shape the way we live our lives and what we become among the living. Prayer is a source of my identity, that is, what God created me to be.

Francis always sought tranquillity and peace in prayer. “The soul must have its food which is God.” (2 Cel 96) Attention and composure were equal in meditation as he sought to maintain and to hide from the eyes of the inquisitive, hiding his head in his mantle. Francis’ biographers speak of many occasions when Francis was deep in prayer and contemplation and the effects that this had upon him. He would come away from prayer completely transformed, but he tried to hide this from others so as to avoid the danger of vanity. He knew God had granted him many gifts but he was always conscious that these were gifts freely given to him by God and nothing that he had deserved. He would pray: “Lord, you have sent this sweet consolation from heaven to me, an unworthy sinner; I restore it to you and put it aside because I am a thief having taken your treasure,” and he would add, “Lord, take your blessing from me in this world and keep ti for the future!” (2 Cel 99)

Francis taught prayer by his example. Francis did not set out to teach his followers how to pray in words but by his own example. The Holy Spirit had taught Francis to pray and he received his inspiration from Sacred Scripture as he meditated on it, particularly the Gospel of St John. He was able to reflect on his own personal experiences and be taught to approach God. Francis learnt a great deal from his recitation of the canonical Hours and reflecting on Liturgical texts or sermons. His admonitions on prayer came from his own personal experience, from his worship of the Blessed Eucharist and from personal reflections.

Francis became a “Master of prayer and contemplation” from his own witness. I believe that all Franciscan prayer must start from experience just as Francis learnt from his own experiences. Celano narrates: “At that time, the friars insistently asked him to teach them to pray, because, living in simplicity of spirit, they did not know the liturgical Office yet. He answered them, “When you pray, say the ‘Our Father’ and ‘We adore you, O Christ, here and in all your churches throughout the world…’”. What Francis was doing was: teaching them about the fatherhood of God and about Jesus’ sacramental presence in the Blessed Eucharist in the churches that they used to visit. Visiting the churches was a way Francis taught his followers.

The “Book of Christ’s Cross” referred to above, means “the sufferings, death and resurrection of Christ”. In other words, Francis was able to teach them the deeper meaning of the death and resurrection of Christ by his example. The fact was that they were learning to be contemplatives in their prayer life, allowing the Holy Spirit to guide them. Francis himself spoke of these illiterate friars as his “knights of the round table” who hid themselves in lonely and uninhabited places sothat they could devote themselves more devotedly to prayer and meditation…” In regard to liturgical and choral prayer, only clerical friars who knew how to read and sing were able to recite or chant the canonical hours. Francis gave the option to his friars to pray the Divine Office, but it was evident that Francis gave preference to those who consented to pray, even simple unlearned friars, and their Book of the Cross was their meditation for which they shed tears over thePassion of Christ. Francis regarded this prayer of the “poor and simple” as more efficacious than that of those who recited the Office because many of those who had knowledge of reading and writing did not know how to genuinely pray.

Francis taught his friars about the primacy of contemplation. He had not sacrificed it, but rather he had chosen to live an active and apostolic life. Insofar as he asked all his friars to work according to their capacity – either with their hands or intellectually – he never abandoned or intended that they neglect the life of prayer. We can see clearly that Francis succeeded in leading some of his early friars to deep contemplation, for example, Blessed Giles of Assisi. Blessed Giles was one of the “simple friars” who left behind a wealth of teaching in his sayings, especially devoted to contemplation.

Prayer has been described as a “raising of the mind to God”. This idea comes from Neo-Platonic sources where a person must free himself from the material world to raise himself up to the spiritual. St Augustine suggested that it is more a “conversation with God”. Many authors today prefer to describe prayer as “raising one’s mind to God even through creation.” Francis seems to have preferred this idea and using this form of prayer to praise and glorify God for his many gifts